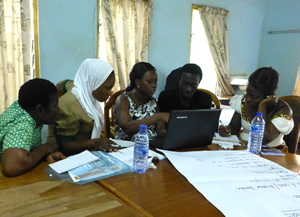 The District Assessment Tool for Anemia (DATA) is a Microsoft Excel-based tool that has the dual intent to assist in the prioritization of district-level action on anemia, and also to increase awareness of the multi-factorial nature of anemia and the multi-sectoral effort needed to prevent and treat it. Specifically, DATA helps district program managers and technical assistance providers to determine the main factors that cause anemia, identify enablers and barriers to addressing anemia, and prioritize interventions to combat it.

SPRING has piloted the DATA in three countries: Ghana, Nepal, and Uganda.

In Ghana, the pilot included sensitizing regional officials to the benefits of the tool and hosting a two-day facilitated workshop with district-level actors. A regional-level meeting was held in Tamale and input from multi-sectoral actors was used to guide discussions at the following district-level workshop. During the district workshop, technical experts from SPRING facilitated the use of the tool, assisting district managers to navigate through the tool’s various components and conducted a simulated decision-making process on prioritization of anemia program actions through group work and consensus building. Feedback from the participants on the tool and its implementation was positive and shaped the current version of the tool.

In Nepal, a national orientation meeting was held in Kathmandu to discuss the context-specific application of DATA and to orient national officials to the tool. Following the meeting, a two-day workshop was held in Kapilvastu District with both district- and national-level stakeholders in attendance. SPRING introduced the role of DATA in reducing anemia and assisted the officials in navigating the tool. The officials simulated a decision-making process on prioritization of anemia program actions, using a combination of group work and consensus building. Participants responded positively to the content and SPRING is now developing materials in Nepali.

In Uganda, SPRING supported the National Anemia Working Group to pilot DATA in three districts: Namutumba in the East Central region, Arua in the West Nile region, and Amuria District in the Eastern region. District managers were guided through the various components of the tool and the decision-making process for prioritization of anemia program actions. The districts intend to implement the prioritized actions identified by the DATA process during Financial Year 17/18 to strengthen anemia reduction efforts across key sectors. DATA is now being scaled-up throughout the country.