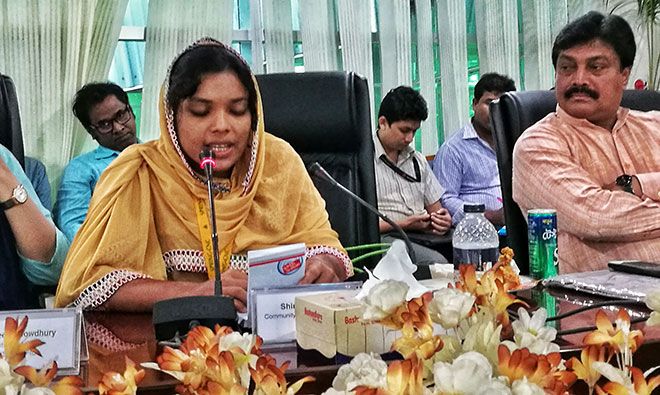 On August 18, 2016, SPRING/Bangladesh participated in a roundtable discussion entitled “Protecting and Promoting Breastfeeding: Challenges and Opportunities to Implement the Breast Milk Substitutes (BMS) Act 2013.” The event was organized by three USAID-funded projects—SPRING, MaMoni, and SHIKHA—and was co-hosted by Kaler Kantho newspaper and the Government of Bangladesh. Attendees included government representatives from the Ministry of Health and Family Welfare; stakeholders from the International Centre for Diarrhoeal Disease Research, Bangladesh (icddr,b), BRAC, and the Bangladesh Breastfeeding Foundation; and staff from SPRING/Bangladesh. Ms. Sheema Khatun, a community nutrition champion (CNC) from Jessore, participated in the discussion.

CNCs are graduates of SPRING Farmer Nutrition Schools (FNS), who are selected by their peers to voluntarily spread messages about nutrition and hygiene in their communities. These CNCs are women from the communities who work to ensure that other women in the community are maintaining best practices in nutrition. The CNCs also help to reinforce the relationship between their community and the health system.

Ms. Khatun spoke about the importance of breastfeeding and the adverse impacts of powdered milk on infant health. Ms. Khatun further elaborated on the role of CNCs and their continuous efforts in promoting breastfeeding to their communities as an essential nutrition behavior. She spoke about the existing structural challenges that inhibit women from breastfeeding, including that doctors often prescribe powdered milk for infants, despite World Health Organization (WHO) guidance that infants should be exclusively breastfed until six months and receive complementary foods from six months to two years.

Ms. Khatun ended her speech by highlighting the role of the SPRING FNS and the voluntary services in the community for changing societal perceptions about infant feeding practices. The event received excellent coverage in Kaler Kantho and the Daily Sun newspapers, as well as live coverage on News24.