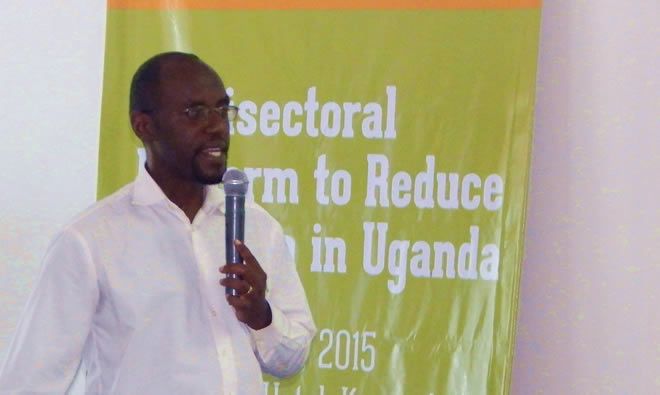 Government of Uganda Calls for Multisectoral Approaches to Address Anemia

"Addressing anemia often requires an integrated approach to effectively combat it," remarked Dr. Acheng Jane Ruth, the Director General of Health Services during her opening remarks at the Multisectoral Anemia Stakeholders' Meeting in Kampala. The meeting, held in March 2015, brought together stakeholders from government, private sector, civil society, academia, and development partners to share progress made by the National Anemia Working Group over the past year.

Although substantial progress has been made in Uganda, anemia is still a sizable public health challenge, especially among women of reproductive age and children under five. Dr. Acheng's speech emphasized the public health importance of anemia, which contributes to the country's high infant, child, and maternal mortality rate.

Ms. Bakunzi Maureen, Assistant Commissioner of Policy, Coordination, and Monitoring in the Office of the Prime Minister and the focal person for the Uganda Nutrition Action Plan (UNAP), highlighted the current UNAP progress in the anemia fight. She also emphasized the importance of Uganda’s multisectoral approach towards the elimination of anemia. She noted that the country is on the right path with the integration of nutrition into the National Development Plan 2.

Speaking at the same meeting, Dr.Winyi Kaboyo, the Commissioner for Community Health at the Ministry of Health, stressed the ministry's commitment to chair and coordinate the National Anemia Working Group. He applauded development partners, especially SPRING, for reinvigorating the working group.

The first part of the meeting also included presentations on anemia programming from the Ministry of Health Nutrition Unit, Ministry of Agriculture, and SPRING. SPRING helped set the stage by giving an overview of the global perceptive on anemia control. Dr. Sorrel Namaste presented the recent figures from the Global Nutrition Report indicating that only 5 out of 185 countries with anemia data are on course to reduce anemia. The fact that Uganda is not part of these five countries got stakeholders thinking about what actions need to be taken to reduce anemia. Ms. Sarah Ngalombi, the chair of the "Uganda National Anaemia Working Group," presented the group's progress in implementing the 2014 National Anemia Action Plan and provided a road map for the development of a 2015/16 plan. The morning closed with a presentation by Mr. Stephen Biribonwa of the Ministry of Agriculture who provided an example of multsectoral work being undertaken in Uganda. The new "Multi-sectoral Food Security and Nutrition Project" provides a platform to coordinate across sectors while still implementing interventions within each respective sector's existing systems, budgets, and accountability structures. The second component involved break-out session, organized by the lifecyle, where participants shared experiences and worked on developing a National Anemia Action Plan for 2015/16. The day also included presentations from Mr. Moses Mutabzai, a Kisoro District nutritionist, who shared the overall district experience on implementing the multisectoral approach. He highlighted the important role SPRING has played in building the capacity of the multisectoral district and sub-county coordination committees and in rolling out interventions to reduce anemia at the health facility and community levels. The role of the private sector was presented by Dr. Andrew Sekitoleko, who emphasized the need to engage the private players in the fight against anemia.

In her closing remarks on day two, Dr. Acheng Jane Ruth called for implementation and strengthened accountability for the National Anemia Action Plan. She also urged the inclusion of sickle cell disease into the anemia agenda and for increased funding to address this blood disorder. She acknowledged that she has a personal interest in the National Anemia Working Group and wants to see it succeed. There was also emphasis to take the interventions closer to the communities during 2015.

Overall, the workshop brought together 100 participants from across sectors. It provided an excellent platform for technical experts to both share their work and learn from professionals in other sectors. At the end of the meeting, the Government of Uganda representatives called for rapid implementation of the 2015/16 National Anemia Action Plan based on promising global evidence demonstrating the effectiveness of high impact interventions.