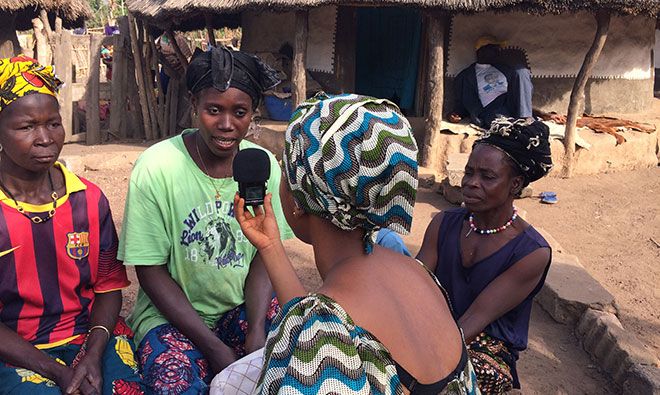 In April 2017, SPRING/Guinea and Farm Radio International (FRI) led trainings in Mamou and Faranah for four local community radio stations on how to develop effective interactive radio programming to support the uptake of nutrition-sensitive agriculture practices being promoted under the Feed the Future Strengthening Market-Led Agricultural Research, Technology, and Education (SMARTE) activity, led by Winrock International. Participants included staff from Radio Bambou and Radio Rurale of Faranah and Radio Rurale and Radio GPP of Mamou.

Two staff members from each station learned FRI’s participatory radio approach, with the workshop culminating in each team’s creation of a three-minute program on nutrition-sensitive agriculture techniques. One of these videos compared the advantages and disadvantages of improved varieties of seedlings for horticultural crops, rather than using traditional seeds. Another video compared the use of forced air dryers with traditional drying techniques for drying horticulture crops like okra during the rainy season. Each program focuses on education and building awareness about the techniques and relevant technologies, while incorporating comments from farmers and experts to reinforce the message.

Radio GPP FM in Mamou interviewed Sébatien Nègre, one of the training instructors from Farm Radio International, and Cécile Ndiaye from the SMARTE project, about the objectives of the training and how radio can help improve nutrition in Guinea.

This activity was conducted as part of SPRING’s commitment to collaborating with local and international partners to support evidence-based initiatives to improve nutrition globally. SPRING/Guinea and Farm Radio International (FRI) conducted a radio assessment in February 2017 that informed the selection of nutrition-sensitive agriculture topics for the radio trainings.

Listen to the interview