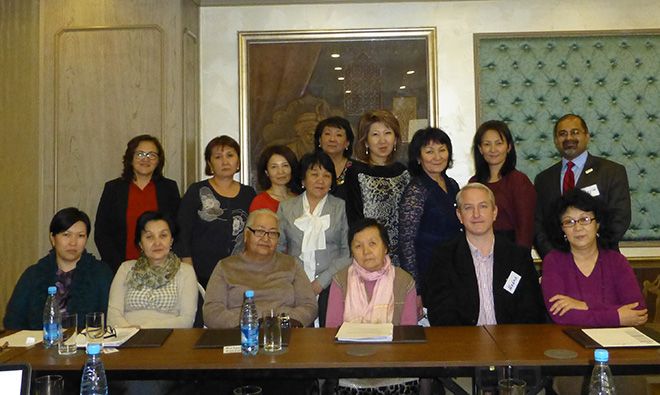 The Kyrgyz Republic has recognized that anemia rates in the country are too high, and is committed to improving anemia especially among pregnant and lactating women and children under two years of age. To support this endeavor, a meeting of the Clinical Guidelines Development Working Group was held on March 25-26 to finalize a national protocol for the screening, diagnosis, prevention, and treatment of iron-deficiency anemia in the Kyrgyz Republic. The intended audience for the protocol is primary care physicians, health managers, and patients.

The first day featured a presentation on the status of nutrition and iron deficiency in the Kyrgyz Republic by Dr. Tursun Mamyrbaeva and other presentations on general micronutrient programming, integrated anemia programs, WHO recommendations on anemia, and comments on the draft protocol from Dr. Denish Moorthy. The participants split into four working groups reviewing the protocol for four age groups - children, women of reproductive age, pregnant women, and adults over 50 years. The groups presented the results of their review on the second day, followed by discussions and finalization of the protocol by consensus. The result of the two-day meeting was a protocol slated to be finalized on April 2nd, after input from other health departments is received.

The anemia protocol review is a part of a broader SPRING effort to promote integrated anemia programming.