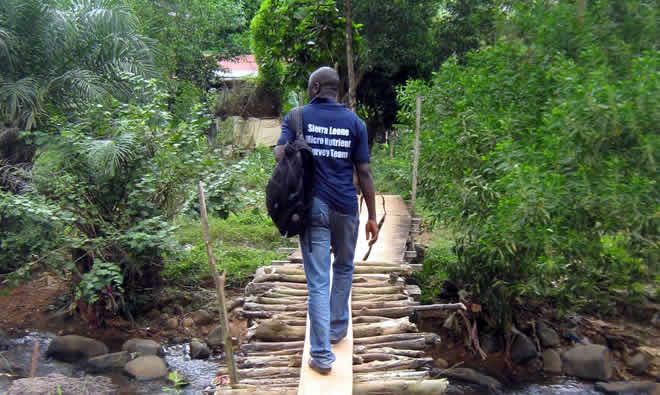 The Government of Sierra Leone disseminated its nationally-representative, comprehensive micronutrient survey (2013 SLMS (PDF, 3.6 MB)) on December 3, 2015 with approximately 50 government, partner, and donor staff participating. The survey was conducted by the Ministry of Health and Sanitation (MoHS) and multiple stakeholders, including Helen Keller International (HKI), UNICEF, WHO, FAO, and GroundWork, with funding support from Irish Aid, the Canadian Government, and USAID.

The micronutrient survey provides a comprehensive picture of anemia and micronutrient deficiencies in Sierra Leone. It found the anemia prevalence in children 6-59 months of age (76 percent), pregnant women (70 percent) and non-pregnant women (45 percent) is a serious public health problem, but that rates of iron deficiency anemia are low: 4 percent in children and six percent in non-pregnant women. This suggests that rather than iron, perhaps the high prevalence of anemia in Sierra Leone is due to malaria, genetics, other infections, and inflammation and deserves a deeper look.

As reducing anemia is a key 2025 World Health Assembly target, and as the determinants of anemia are numerous, it is important for governments and national stakeholders to coordinate across sectors in an effort to reduce anemia. With support from SPRING and HKI, the Sierra Leone's Ministry of Health will establish a multi-sectoral platform to identify, prioritize, and integrate anemia interventions into national policy and programs.