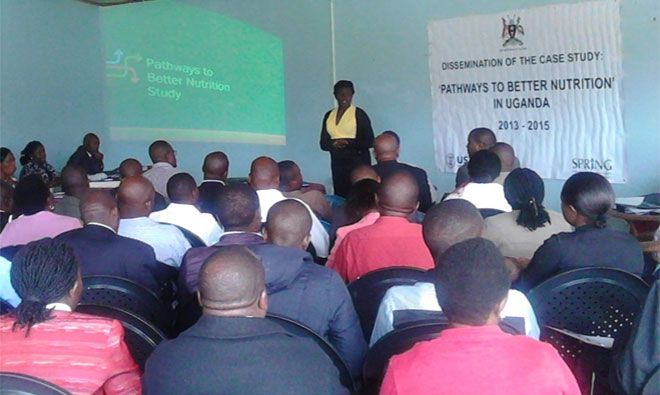 During three dissemination events in Uganda, SPRING, USAID’s global nutrition project, presented findings from its Pathways to Better Nutrition (PBN) Study. This study, which took place from 2013 to 2015, provides a time-series view of changes in planning processes and funding mechanisms for nutrition.

Based on the study results, SPRING developed 10 recommendations to aid Uganda and its partners in moving forward, including full institutionalization of the Uganda Nutrition Action Plan (UNAP) into planning, financing, staffing, and implementation structures on a national scale, strengthening communication between concerned parties, and approving an expedient implementation of the UNAP monitoring and evaluation framework.

The PBN study shows how the UNAP has not only scaled up nutrition but also played an important role in increasing knowledge, perceptions, and behaviors related to planning and financing for nutrition, SPRING/Uganda’s Chief of Party, Mr. Manohar Shenoy explained.

District-level events were held in Lira and Kisoro, and each had about 100 attendees, including district officials, politicians, sub-county chiefs, healthcare practitioners, civil society members and community-based organizations. The national-level event was attended by roughly 60 individuals, including members of the Uganda’s Office of the Prime Minister and other key sectors of government, USAID, representatives from Lira and Kisoro districts, development partners, and donors.

At the events, the SPRING PBN team presented key findings, showing that the UNAP has played an important role in catalyzing planning and financing for nutrition. Implementing the UNAP has supported country buy-in to the multi-sectoral approach, but has not yet yielded increases in funding for nutrition. Participants at all events expressed interest in SPRING’s findings, in building technical capacity to continue use of the budget figures, and in continuing work toward improving nutrition.