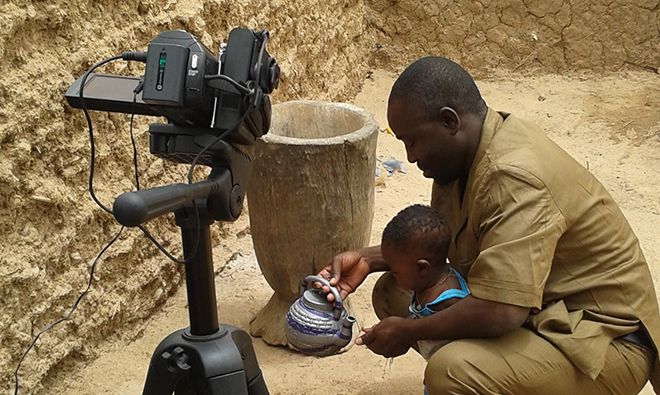 Working with Resilience and Economic Growth in the Sahel-Enhanced Resilience (REGIS-ER), Save the Children, Mercy Corps, and regional health officials, SPRING selected themes to teach good nutrition and household-level maternal, infant, and young child nutrition (MIYCN) in a resilience context. Because these videos feature community members, and are respectful of local customs and structures, communities are receptive to the new practices and understand the rationale for adopting them. Videos were disseminated in 20 villages throughout the Maradi Region, working with 80 community groups and reaching an estimated 1,500 farmers. In the upcoming year, SPRING plans to expand the community-led video model to reach more communities in the regions of Maradi and Zinder.

During evaluation of this work, SPRING has found increased behavior adoptions after viewing videos and overall favorable reactions to the videos. For example, household handwashing with soap increased from about 74 percent to over 96 percent and the percentage of participants who began engaging in responsive feeding for young children also increased from 31 percent to 85 percent. These positive results demonstrate the effectiveness of the community-led video model and the potential to continue expanding use of this as a valuable teaching resource.

The first six of ten videos produced and disseminated as part of the SPRING/Digital Green collaboration in Niger’s Maradi Region have been officially launched and can be viewed here.

This collection of videos focuses on critical household-level maternal, infant, and young child nutrition (MIYCN) and hygiene practices and feature local community members. In these videos, pregnant and lactating mothers, their husbands, and other family members, learn simple nutrition and hygiene behaviors that can prevent stunting and reduce maternal and child anemia in the first 1,000 days of a child’s life. Having local families of similar means demonstrating recommended behaviors on screen helps to contextualize the messages and increase adoption of these behaviors among viewers.

These videos have been disseminated through community groups in 20 villages of Niger from April to September 2015. They are recorded in Hausa and the uploaded versions feature the option for French or English subtitles.