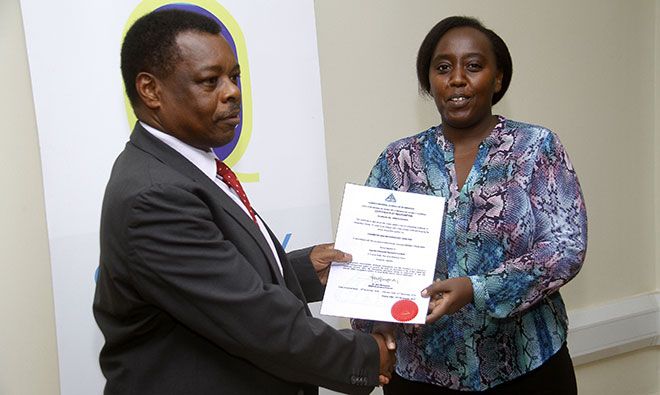 In Uganda, before fortified foods are approved to enter the market, the Uganda National Bureau of Standards (UNBS) tests them for quality. As more manufacturers get interested in food fortification, the number of fortified samples to test also increases. Until December 7, 2016, only UNBS was authorized to provide testing facilities and product certification, leaving the bureau overwhelmed and creating a backlog of products needing approval before entering the market.

At an awards ceremony held on December 7, 2016, each lab received a certificate of recognition. At the event, Deputy Executive Director of UNBS Patricia B. Ejalu discussed the importance of having more laboratories to help UNBS test fortified foods. She remarked that an increased number of testing laboratories makes business sense, as having more qualified testers increases accessibility of the service, reduces costs, and boosts the speed of results.

Also at the event, Dr. Ben Manyindo, the Executive Director at UNBS, announced that UNBS is working on adding more trained laboratories in other parts of the country to further increase testing availability. As more industries buy into food fortification and more awareness increases demand, these additional laboratories will help handle the larger testing load.

SPRING promotes access to safe, quality fortified food products. Click on the links below to learn more about how we are working towards increasing demand and availability of fortified foods in Uganda.