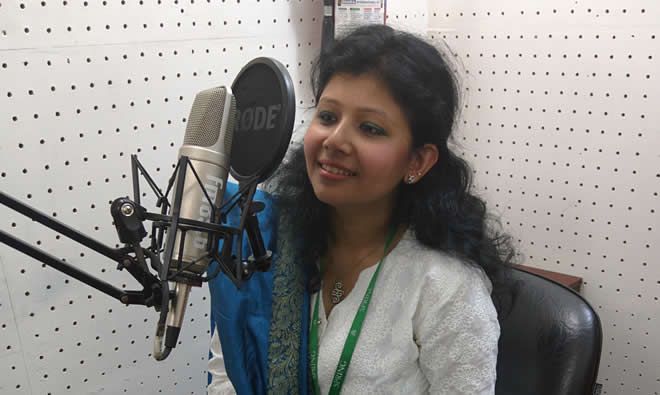 Bangladeshi television channel Desh TV airs a public health show called ‘Jiboner Golpo’ (Life’s Story) in partnership with USAID and Voice of America. SPRING/Bangladesh was recently invited to participate in the latest episode to discuss the importance of handwashing, especially in the context of maternal and child health and nutrition. Voice of America also collaborates with Radio Today, a popular FM radio station in Bangladesh, and SPRING was invited to participate in a radio broadcast on handwashing.

SPRING/Bangladesh’s Social and Behavior Change Communications and Nutrition Specialist, Ms. Tonima Sharmin, took part in the conversation on behalf of the project. Ms. Sharmin discussed the current state of handwashing in Bangladesh and why the issue holds so much significance in the context of the country. She spoke about how handwashing is related to health and nutrition and how its negligence is affecting young children in particular. She said it was important to raise awareness among mothers and caregivers to help everyone in the family develop the habit of handwashing. She highlighted that tippy taps, introduced by SPRING in Bangladesh, have been making handwashing easier for people who used to previously ignore it because of a lack of access to clean water.

In addition to their appearances on radio and television, SPRING/Bangladesh recently marked Global Handwashing Day (Thursday, October 15) by facilitating several activities in their working areas of Khulna and Barisal divisions to raise awareness on this important issue.