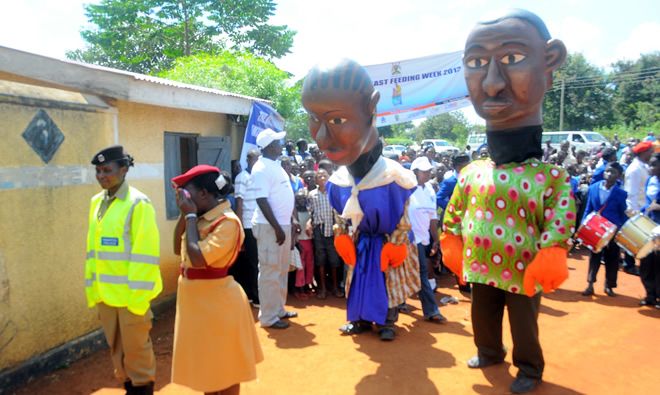 Every year, Uganda joins the rest of the world to celebrate World Breastfeeding Week (WBW). This year, the WBW celebration coincided with the launch of the Partnership for HIV Free Survival (PHFS), a global initiative to eliminate new HIV infections in children and to keep their mothers alive using a continuum of care (antiretroviral treatment and nutrition) that begins during pregnancy and extends through the postnatal period. PHFS, targeting six high-burden countries in Africa (South Africa, Tanzania, Uganda, Kenya, Lesotho, and Mozambique), was launched March 11-14, 2013 in Pretoria, South Africa. Uganda, through its implementing partners at national and district levels, agreed to launch the initiative in-country during WBW. SPRING/Uganda is providing technical assistance to the government for the implementation of the initiative in three of the six districts of Namutumba, Kisoro, and Ntungamo.

Based on its unique history of a malnutrition epidemic in 2011, the government identified Namutumba district to host the PHFS launch and WBW celebrations this year. With the theme of “Strengthening Community Support for Optimal Breastfeeding towards a Healthy, Well-nourished, and HIV Free Generation,” the launch and the celebrations were kicked off in Namutumba district on August 9, 2013. The event was attended by government and CSO representatives from the six districts (Jinja, Tororo, Manafwa, Kisoro, Ntungamo, and Namutumba) where the partnership is being implemented, Ministry of Health delegates, representatives from development partners (WHO, USAID, CDC, and UNICEF), USAID implementing partners (FANTA, ASSIST, STAR-SW, STAR-EC), representatives from the Institute for Health Care Improvement (IHI), other NGOs, health workers, and community members from Namutumba district. The event was officially graced by the Guest of Honor, the Minister of State General Duties, Dr. Elioda Tumwesigye.

During the launch, SPRING worked with the district and other implementing partners to provide integrated HIV and nutrition services to mothers and children. Prior to the launch, SPRING and STAR-EC supported the district health office and health facilities by providing outreach services to communities, intensive community mobilization, including radio talk shows to create mass awareness about the partnership and the need for continued support for breastfeeding and other recommended feeding practices for children and mothers. As stated by the Guest of Honor during the launch, SPRING is dedicated to working with the Government of Uganda to provide integrated services for HIV free survival.

Photo: A community mobilization team marching through Namutumba district during the launch of PHFS and WBW, August 9, 2013 (Courtesy of Rita Ntegyereize)