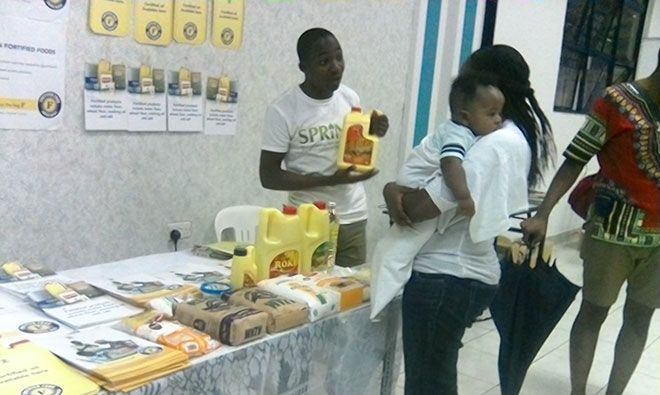 SPRING/Uganda at the East African Baby and Kids Expo

On November 5th and 6th, SPRING/Uganda exhibited at the Baby and Kids Expo – East Africa. Many parents and expectant mothers flocked to SPRING’s booth to learn about the benefits of consuming fortified foods. Fortification involves boosting certain foods’ nutritional value through the addition of micronutrients like vitamin A, zinc, and iodine.

Many parents were hearing about food fortification for the first time, even though some had unknowingly consumed fortified salt, wheat, and oil products. They were excited to learn about the nutritional value in fortified foods and wanted to know how and where to purchase fortified maize flour.

Maize flour is consumed frequently in most Ugandan households. Unfortunately, fortified maize flour is not readily available on the local market. In addition, imported foods that are known to be fortified do not always have the standard “F” logo, making it difficult for buyers to identify them as fortified.

Creating demand for fortified foods like maize flour will go a long way in SPRING’s goal of increasing food fortification. SPRING partners with other USAID-funded nutrition implementing partners, including Communication for Healthy Communities (CHC) and Food and Nutrition Technical Assistance III Project (FANTA), and Diet Clinic from the private sector.