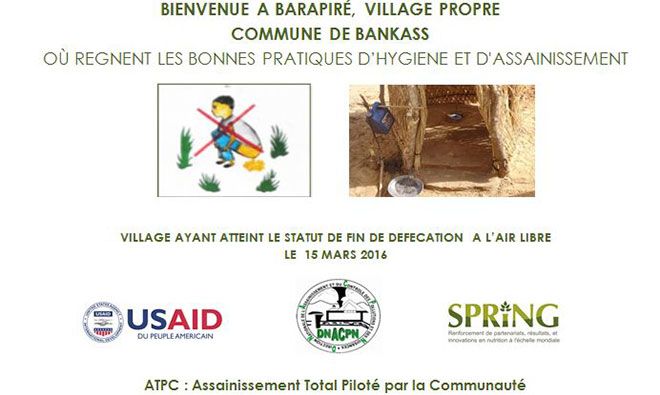 In 2015, SPRING/Mali set an objective to integrate water, sanitation, and hygiene (WASH) into agriculture and nutrition-focused activities, through the Community-Led Total Sanitation (CLTS) approach in 100 villages in the Mopti region. Recognizing that the project could not initiate CLTS activities in all 100 villages in the first year, SPRING turned to the Direction Régionale de l’Assainissement et de Contrôle des Pollutions et Nuisances (DRACPN) to begin by targeting 50 villages for fiscal year 2016. SPRING and DRACPN’s target was to declare 15 villages open defecation free (ODF) by February 2016.

The DRACPN suggested waiting until the end of the rainy season (June-October) to initiate CLTS in communities. DRACPN helped SPRING identify villages where CLTS had not yet been implemented and villages where CLTS had been implemented and was unsuccessful, allowing the partnership to focus on villages where DRACPN felt that ODF status was highly possible. Together, the partnership “triggered” 26 qualified villages in September as the rains were tapering off. Triggering is a process that includes generating disgust among community members by mapping the defecation areas in the community through “transect walks” and identifying fecal pathways.

Using an approved set of CLTS materials, SPRING provided the training and conducted twice monthly visits to encourage the construction of latrines and tippy taps. Across the 26 villages, the project facilitated building and repairs of nearly 1,000 latrines across 2,285 households. After only five months, SPRING met and exceeded the original goal as DRACPN declared 20 of the 26 communities ODF by February 2016. ODF celebrations took place on March 18, 2016 in Madina Dimbal and on March 25, 2016 in Gomou-Kanda, town Koporo-Pen. The celebrations marked a significant achievement in attaining WASH goals for 20 villages in Mali.