National Policies and Plans to Address the Dual Burden of Malnutrition 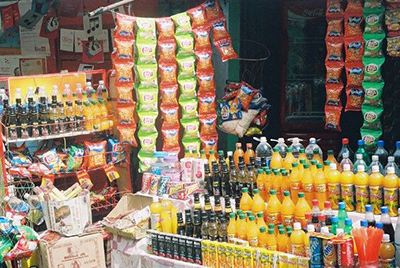 According to the 2013 Global Burden of Disease study, diet and nutrition-related factors represent the greatest risk factors for disease worldwide. The scope of malnutrition is enormous; billions of people are affected worldwide and it is estimated to cost the global economy 3.5 trillion U.S. dollars per year ($500 per person) (FAO 2013). Countries with a significant burden of overweight and obesity in addition to undernutrition are often said to face a “dual burden” of malnutrition. Figure 1 shows the scope of the dual burden of malnutrition globally. Working in nutrition today means, therefore, that one must understand interactions across the full spectrum of malnutrition and the impact these have on nutrition-related non-communicable diseases (NCDs) such as diabetes and heart disease.

Malnutrition and nutrition-related NCDs are often interlinked and bound to food insecurity. Food insecurity not only causes hunger but may also interfere with healthy metabolic processes and can force individuals to eat low-quality foods, “feasting” when food is available to make up for periods of “famine” (Darnton-Hill and Coyne 1998; Dhurandhar 2016).

Unless policy makers apply the brakes on overweight, obesity and related disease and accelerate efforts to reduce undernutrition, everyone will pay a heavy price: death, disease, economic losses and degradation of the environment.
-Global Panel on Agriculture and Food Systems for Nutrition 2016

Coordinated policy action to address malnutrition, nutrition-related NCDs, and food security is critical. In the last decade, national policies and strategies for undernutrition have multiplied, but they rarely cover the full range of malnutrition. A World Health Organization (WHO) 2013 review found that most policies “do not adequately respond to the challenges that countries are facing today; in particular, the double burden of nutrition.” Separate from the national nutrition policies, there has been growth in multi-sectoral NCD-prevention policies in response to the 2011 Global Political Declaration on NCDs and to the rising prevalence of diabetes, hypertension, and cardiovascular disease.

In response to the growing dual burden, in 2017 the WHO identified a set of “double-duty actions” that affect many types of malnutrition, in essence increasing their value as an investment across nutrition, NCD, and food security platforms (WHO 2017). Including these and other double-duty actions across sectoral policies is one way to increase the likelihood of them being planned and funded (Pomeroy-Stevens, Viland, and Lamstein 2017).

What are Double-Duty Actions?

As defined by the WHO, double-duty actions include “interventions, programmes and policies that have the potential to simultaneously reduce the risk or burden of both undernutrition (including wasting, stunting and micronutrient deficiency or insufficiency) and overweight, obesity or diet-related NCDs (including type 2 diabetes, cardiovascular disease and some cancers)” (WHO 2017).

SPRING examined the state of existing policies on double-duty actions in 29 countries. The countries selected were those listed as high priority for maternal and child health (MCH) and nutrition by the U.S. Agency for International Development (USAID) in 2017. Using a systematic Internet search and email requests to government representatives in each country, SPRING looked at their policy documents for nutrition, NCD prevention, and food security (if available). The searches were crosschecked with the WHO Global Database on the Implementation of Nutrition Action (GINA), SUN Movement country pages, and the Food & Agriculture Policy Decision Analysis Tool to determine if new plans were in process but had not been released. The search was conducted in Spanish and French as well. Documents reviewed included plans, policies, and strategies that outlined a strategic direction for the country. We did not review operational guidelines or protocols.

After locating the relevant policy documents, SPRING reviewed the objectives, outcomes, and activities listed in each to determine if they related to any of the six aforementioned double-duty actions identified by the WHO (2017):

We also noted any other actions that could potentially be considered double-duty that were included in the policies. All references to double- duty actions were cross-referenced to identify any conflicting guidance. We did not include policies still under development, or those not yet launched (we note these draft policies in the detailed tables, but do not count them in the tallies).

Of the 29 countries in the initial search, SPRING selected eight with current active policies in all three areas (nutrition, NCD prevention, and food security) for a desk review, supplemented by phone calls and emails to government and nongovernmental organizations in each country. The results were compiled in an Excel database and a side-by-side comparison of the results was conducted to understand if and/or how double- duty actions were referenced in each document. We supplemented these findings with secondary data from the WHO Nutrition Global Targets Tracking Tool, the WHO data repository, and the Scaling Up Nutrition Movement Nutrition Budget Analysis Database.

The 29 USAID MCH and nutrition priority countries account for about 20 percent of the total burden of global malnutrition. Based on the WHO nutrition target data and the WHO data repository, the average population-adjusted stunting rate for these countries is 38 percent and average rate of adult overweight is 22 percent. Madagascar, at 49.2 percent, has the highest rate of stunting, while Indonesia has the highest percentage of overweight children, at 11.5 percent. Guatemala has the highest rate (52 percent) of overweight in women of reproductive age. Several countries’ burdens of stunting and some form of overweight were among the top quintile among this group, signaling a clear dual burden (those highlighted). 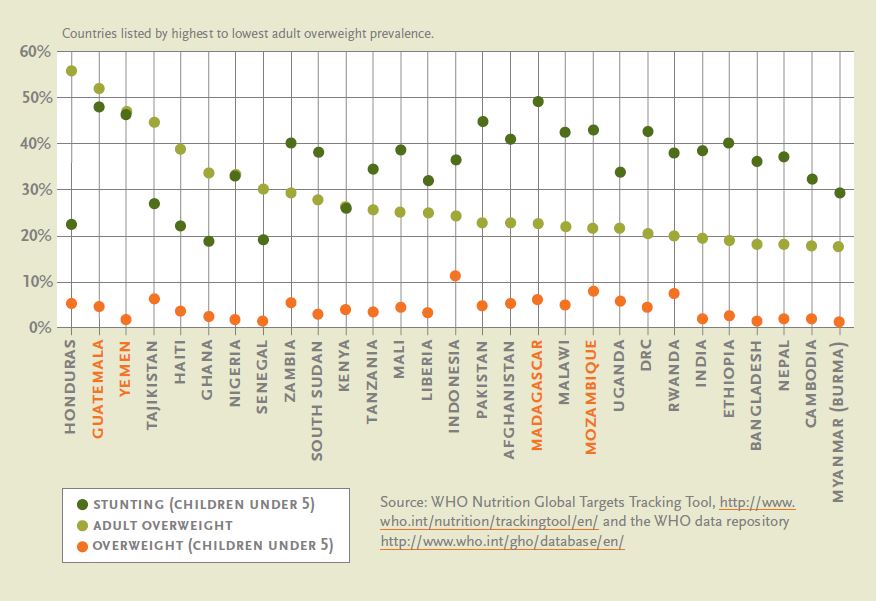 The policy review provided several new insights. First, it revealed that there are few places to find comprehensive listings of national policies related to nutrition, NCDs, and food security. The WHO’s GINA database is well-designed and positioned to be a global repository, but most country listings have not been updated and, thus, GINA does not house current country policies: only two of the 29 countries reviewed had what appeared to be the latest policies for all three areas included in GINA. In addition, national ministry or secretariat websites often did not post the current policies, especially for food security.

Second, overall there was limited availability of nutrition, NCD, and food security policies:

Figure 3 shows the overall breakdown by policy area. Across these 29 countries, 7 had either already combined their nutrition and food security policies into one policy or were in the process of doing so. Only Tajikistan had a combined nutrition and NCD-prevention policy, in the form of its 2014 Nutrition and Physical Activity Strategy.

The in-depth policy review, limited to the eight countries that had all three policies, revealed that the dual burden was mentioned in nearly all nutrition and NCD policies, but rarely noted within food security policies. Among these countries, none identified all six WHO double- duty actions in all three policies.

Figure 3: Types of Policies Available for the 29 USAID Priority Countries 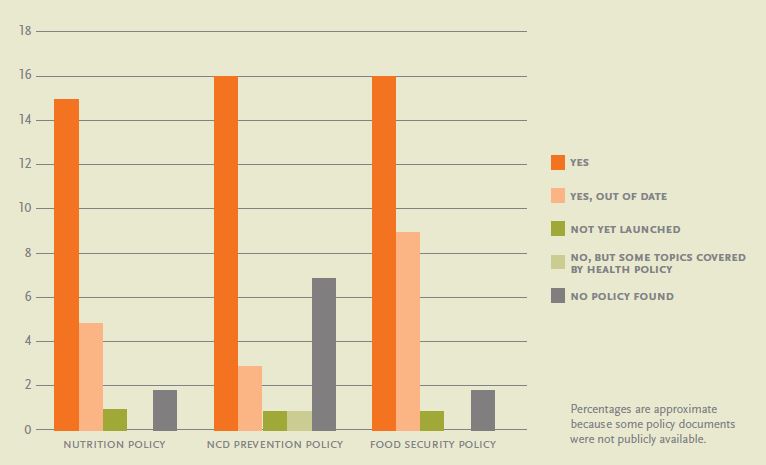 To summarize across the eight countries we found that—

Unsurprisingly, Cambodia and Rwanda, which had joint nutrition and food security policies, mentioned double-duty actions more and with fewer conflicts in guidance. Unfortunately, in their NCD policies, both countries had very low inclusion of double-duty actions. Across the eight countries, NCD policies typically focused on marketing regulations, school feeding, and exclusive breastfeeding, while food security policies usually focused on school feeding and some component of infant and young child feeding, if mentioned at all.

In addition to the WHO-suggested double-duty actions, the review identified several actions across policies that have the potential to also be counted as “double duty” actions (depending on how they are implemented), such as—

Many of these potential actions fall within the area of agriculture and food security; further evidence is needed to determine the impact they might have on all forms of malnutrition.

Regarding conflicting guidance across policies, seven of the eight countries had at least one potential conflict in the guidance given for a double-duty action across two or more policies. Most often this came up in the treatment of salt as a “friend” (iodization) or “foe” (taxation to reduce consumption), which could complicate national marketing regulations for salt. There were also multiple conflicts related to regulation and implementation of school feeding programs and nutrition education, which could impact the scale, quality, and nutrition-sensitivity of these programs. Finally, only two countries specifically mention the need to coordinate across multi-sector policy platforms.

Since the concept of double-duty actions is still emerging, the results of this review should not be considered a critique but rather a way to assess the attention given to these actions. The following are some limitations of this study:

Recognizing these limitations, our findings should be helpful in determining how to improve the harmonization of policy and increase the prioritization of double-duty actions. This review should encourage discussion about how to maximize investments across the malnutrition spectrum.

We offer these recommendations to country government staff working in the areas of nutrition, NCD prevention and food security as they review and revise their own policies: