Reducing Anemia in Uganda: The SPRING Approach and Lessons Learned 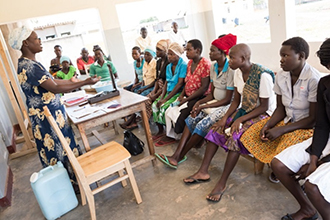 Anemia is a critical health problem in Uganda with 53 percent of children and 32 percent of women anemic (UBOS and ICF 2017). This has significant adverse effects on the country’s health and economic development. Anemia is estimated to be the third-leading cause of mortality in children under five years of age (MOH 2016), and it is estimated that anemia in adult women will cost Uganda about 1.1 trillion Ugandan shillings (US$445.3 million) in lost productivity in the period 2013–2025 in the absence of appropriate investments (Namugumya et al 2014).

Anemia is characterized by a low concentration of hemoglobin in the blood. Although the exact causes of anemia are undocumented in Uganda, evidence shows that genetic traits such as sickle-cell anemia and thalassemia, low bioavailability of iron in the diet, malaria, schistosomiasis and hookworm infections, other nutritional deficiencies, HIV, and poor sanitation are important determinants of anemia among children and women in the East African region (Kassebaum 2014).

The United States Agency for International Development’s (USAID’s) Multi-Sectoral Nutrition Strategy 2014–2025 highlights the need for an integrated, multi-sectoral approach to reduce anemia. In the past decade, USAID’s Micronutrient Program (MOST) and Micronutrient and Child Blindness Project (A2Z) projects, as well as the Global Alliance for Improved Nutrition (GAIN), have supported the Government of Uganda (GOU) in addressing anemia. MOST strengthened guidelines and programs for maternal anemia at the national and district levels, and integrated deworming, malaria prevention, and iron–folic acid (IFA) supplementation into facility-based antenatal care. A2Z carried on MOST’s efforts, improving coverage and adherence to anemia interventions for pregnant women. A2Z also worked with GAIN to support the government in fortifying wheat flour, maize flour, and vegetable oil. Since 2012, USAID’s Strengthening Partnerships, Results, and Innovation in Nutrition Globally (SPRING) project has worked to prevent and control anemia through multisectoral coordination platforms to strengthen policy and programming for anemia and micronutrient deficiencies. SPRING has supported the development of policy documents to guide planning and implementation of programs at the national and district levels. In addition, SPRING supported the enforcement of industrial food fortification regulations and guided the pilot and rollout of home-based food fortification in Uganda.

This brief describes our investments and lessons learned for: 1) multi-sectoral anemia planning and coordination and 2) implementation of nutrition interventions to reduce anemia. We grounded our efforts in three main programming principles:

SPRING has supported coordination and collaboration for anemia efforts in Uganda, bringing together stakeholders from across sectors at the national and district levels to improve planning and program implementation.

In 2013, at the request of the GOU, SPRING carried out a national anemia landscape analysis to better understand the factors contributing to anemia and assess the policies and programs in place for prevention and control. The analysis found gaps in the policy and program environment. Most importantly, a national level working group on anemia proposed in the National Anemia Policy of 2002 was never formed. In addition, though the coverage of several anemia- related programs had improved over the past decade—e.g. IFA and vitamin A supplementation, deworming, and bed net use—the analysis found that many women and children were not being reached. In response to the landscape analysis findings, the GOU established the National Anemia Working Group (NAWG). This body has a broader mandate than the preexisting Micronutrient Technical Working Group (MN-TWG), which focused specifically on addressing micronutrient deficiencies.

There is a bit of teamwork at the personal level, that personal friendship that has developed over time. I think that will improve the working relationship between ministries.
-NAWG member

The NAWG, comprised of ministries, academia, private sector, civil society, implementing partners, donors, and multilateral agencies, is responsible for coordinating, planning, implementing, and monitoring anemia initiatives in the country. Since its inception, the body has initiated several activities which have resulted in an enabling policy environment (box 1). The NAWG is effective in coordinating anemia activities with the key factors contributing to its success being: effective communication and sharing information, strong leadership with strategic vision, and emergent working relationships. A challenging dynamic was maintaining a balance in perspective among diverse stakeholders, each with their own priorities, while formulating the national multisectoral anemia strategy. We documented lessons learned that will inform future efforts. 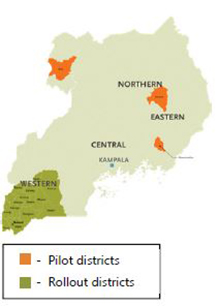 Recognizing the need to build district capacity, the NAWG piloted the District Assessment Tool for Anemia (DATA), which was developed by SPRING to help district personnel better understand anemia, analyze its primary causes, and prioritize activities to address anemia in their district. DATA is an Excel-based tool where data is entered and transformed into dashboards during a two- day facilitated district workshop involving sectors related to anemia prevention and control. The NAWG piloted DATA in three districts, selected to include a range of diverse contexts: Namutumba in East Central region has high anemia prevalence and is a SPRING pilot district for home fortification; Arua in West Nile region has high anemia prevalence and is a border district with refugee communities from Democratic Republic of Congo; and Amuria in Eastern region has moderate anemia prevalence, has collected biomarker data on anemia and vitamin A deficiency, and is a World Food Programme pilot district for home fortification. After a successful pilot phase, the NAWG and SPRING partnered with the USAID Regional Health Integration to Enhance Services in the Southwestern region (RHITES-SW) project to roll out DATA in 15 districts to strengthen their efforts to improve stunting and anemia.

District-level stakeholders found DATA to be a useful planning tool and helped them to launch a multisectoral response to addressing anemia. Heads of departments from relevant sectors—agriculture, nutrition, education, disease control, reproductive health, water and sanitation—along with cross-cutting sectors (gender, local development), mapped out activities and timelines to integrate anemia activities into district plans and budgets for the 2017-18 fiscal year. While data management was identified as a main barrier to the use of DATA, districts were mobilized to improve data collection and use, along with periodic use of the tool to assess progress. RHITES-SW committed to providing technical assistance to implement activities and support existing coordination platforms like the District Nutrition Coordination Committees (DNCC) and the District Health Management Teams (DHMT) in tracking and sharing progress.

One of the things I have learned is there are policies that are in place, but as we were trying to pilot this out, you could see that there is a gap in terms of what is happening on the actual ground. I also discovered there was a gap in data. Sometimes there are national figures on certain indicators which are lacking at the district level.
-NAWG facilitator at DATA workshop 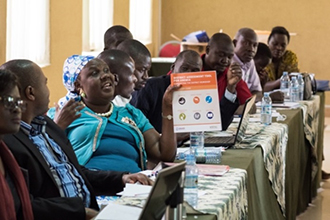 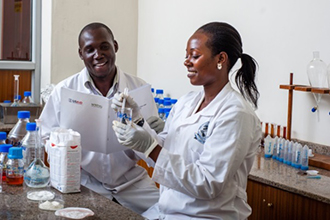 Industrial fortification of staple foods with micronutrients reaches large segments of the population and improves micronutrient status having an impact on the reduction of anemia (Eichler et al. 2012; Martorell et al. 2015; Barkely et al. 2015). In Uganda, fortification was initiated with a salt iodization mandate in 1994, followed by voluntary and then mandatory fortification of oil, wheat, and maize flour over the next decade. 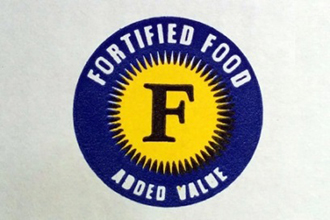 In 2002, the Ministry of Health (MOH) established the National Working Group on Food Fortification (NWGFF), comprised of government, regulatory monitoring bodies, multilateral agencies, food and grain associations, private sector institutions, and academia, to lead fortification initiatives. The NWGFF directs the regulatory agencies that enforce standards and supports the role of the private sector with training to ensure that foods are appropriately fortified. USAID supported the platform through its projects, MOST and A2Z, and SPRING has continued those efforts since 2013. SPRING supported the body’s efforts to improve industrial fortification at all stages of the process, including production, retail, and consumption (figure 1). SPRING also supported development of the National Industrial Food Fortification Strategy 2017–2022, which outlines the roles, responsibilities, and opportunities for both the public and private sectors to prioritize food fortification activities in their work. A key concern for Uganda’s fortification program remains sustainability of enforcement by government regulatory agencies for testing the quality of fortified foods.

…They [the health worker] came around telling us that those children under two years should come and get ekilisa kya-baana [nutrients for children, referring to VMP]…When we received the news, we went very fast to the health center and we got them…
-VMP User

Micronutrient powders (MNP) are single-dose packets of vitamins and minerals, intended for children over the age of 6 months which are sprinkled onto food before consumption to reduce anemia; in Uganda they are referred to as Vitamin and Mineral Powders (VMP). In 2012, the GOU established the MN-TWG tasked with exploring the introduction of home fortification with VMP in the country. At the request of the MN-TWG, implementing partners— SPRING, the World Food Programme (WFP), and UNICEF—carried out formative research to explore the feasibility and acceptability of VMP. Findings helped to shape a social and behavior change and communication (SBCC) plan, with associated marketing materials including print, radio, and video for use across pilot VMP programs in different districts. Next, the implementing partners carried out complementary pilot studies to investigate the operational requirements for district-level distribution of VMP. Box 2 provides information on the SPRING pilot. The partners developed a national training-oftrainers program and manual and trained six national-level and 23 district-level trainers to roll out trainings for distributors in the pilot districts. They also integrated program monitoring tools into the existing MOH monitoring system. The experiences and findings from SPRING’s pilot as well as those of SPRING’s partners culminated in the development of VMP implemention guidelines, for use in conjunction with the national micronutrient and national infant and young child feeding (IYCF) guidelines.

SPRING’s pilot in Namutumba district examined the cost-effectiveness of VMP through two delivery channels: facility health workers and village health teams (VHT). The study showed substantially higher coverage and adherence to the VMP regimen in the community delivery arm. The community arm had a higher absolute cost, but because program outcomes were better, it was more cost-effective. Participants generally reported positive experience with VMP, but noted challenges related to negative side effects (i.e. diarrhea), child refusal to eat food, and difficulty accessing refills. For the most part, health workers found it acceptable to distribute VMP though there was an added work burden. Messaging for behavior change through multiple channels, as well as regular contacts and quality counseling with beneficiaries and their families, were important for continued use. 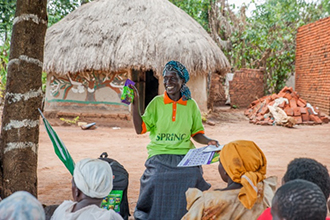 A VHT shows VMP sachets and reminder calendars to mothers in Namutumba district.

Building on SPRING’s Legacy to Maintain Momentum for Anemia

SPRING has provided guidance and support to build upon the strong foundation for anemia reduction efforts that can be taken forward by the GOU and implementing partners.