Seeing is Believing in Niger: Fourth Round of Data Collection

In this slide document, we present findings from a fourth round of data collection completed in May 2017 in Niger to measure the sustained effect of the community video activities. The study focuses on handwashing and responsive feeding (feeding from a separate dish). 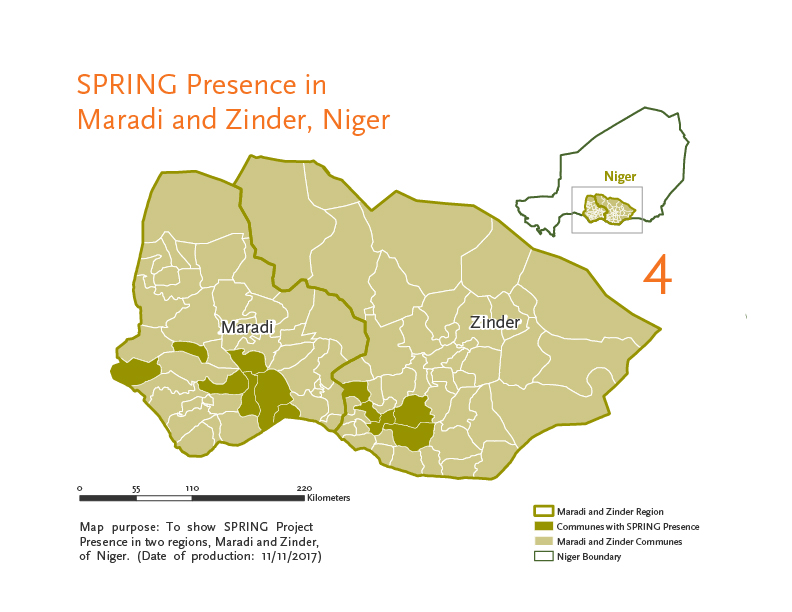 Niger, located in the Sahel region of West Africa, is characterized by harsh climate conditions that contribute to structural food crises and high rates of severe acute malnutrition among children. In 2012, the under-five mortality rate was 127 per 1,000 live births and 43.9 percent of children under five years of age were stunted (INS and ICF International 2012). A number of factors contribute to the high levels of child deaths and malnutrition, including childhood illness and inadequate dietary intake. Underlying determinants of malnutrition include household food insecurity, poor childcare practices, insufficient health services, and an unhealthy environment (Black et al. 2008). Many of these underlying determinants are influenced by cultural norms and practices, including polygamy, an emphasis on male decision-making, and low levels of literacy (Moreaux 2015).

The World Health Organization (WHO) recommends a number of interventions to prevent diarrheal diseases, which contribute to nutritional deficiencies, reduced resistance to infections, and infants and young children (IYC) (Bentley, Wasser, and Creimpaired growth and development (WHO 2015). These interventions include handwashing with soap at critical times, for example, after toilet use. There is also an increasing recognition that feeding behaviors and styles can influence complementary feeding outcomes and dietary intake and thus the growth of ed-Kanashiro 2011). Promoting practices that support appropriate feeding behaviors and styles as well as hygiene requires highly contextualized social and behavior change communication (SBCC) strategies that address the constraints presented in rural, traditional, resource-constrained societies such as Niger.

SBCC is uniquely challenging in remote areas. It can be difficult to engage rural populations because of poor infrastructure and limited access to health care, both of which make it challenging for health workers to reach those most in need. Mass media approaches typically require access to radio or television, but in Niger, less than 50 percent of households in rural areas own a radio and only 3 percent in rural areas own a television (INS and ICF International 2012).

In addition, information often flows outward from urban centers, where a small group of people and interests determine which information rural communities should receive, rather than tailoring media content and allowing adaptation of information to the needs of rural communities based on an exchange of ideas and requests (Berrigan 1979).

The use of video as an SBCC medium offers several advantages when working in rural communities, such as more standardized content with fewer inconsistencies across educators, and high receptivity and understanding among low-literacy populations. Behavior change approaches that incorporate videos coupled with guided discussions at the community level have shown promise in public health (Desta et al. 2014; Khoury et al. 2002; Roye and Hudson, 2003; Tuong, Larsen, and Armstrong 2014). However, evidence is limited on the use of community videos to specifically support Maternal, Infant, and Young Child Nutrition (MIYCN) and hygiene behaviors.

Description of the Intervention

Between January and December 2015, the SPRING project implemented a community video approach in collaboration with Digital Green, REGIS-ER, Save the Children, and Mercy Corps with a total of 80 community groups in 20 villages in Niger’s Maradi region. Videos were screened among four community groups in each village, and were followed by facilitated discussions. A list of the implementation steps for the community video approach can be found in the figure to the left.

Following the successful pilot of the intervention, activities were scaled up to 115 villages in 2016 (61 villages in Zinder and 54 in Maradi). In 2017, the community video approach was expanded to 131 additional villages in these regions.

In 2015, SPRING conducted a mixed-methods evaluation to assess the feasibility, acceptability, effectiveness, sustainability, and costs associated with the community video approach. Findings are available here.

In this slide document, we present findings from a fourth round of data collection completed in May 2017 to measure the sustained effect of the community video activities. The study focuses on handwashing and responsive feeding (feeding from a separate dish). 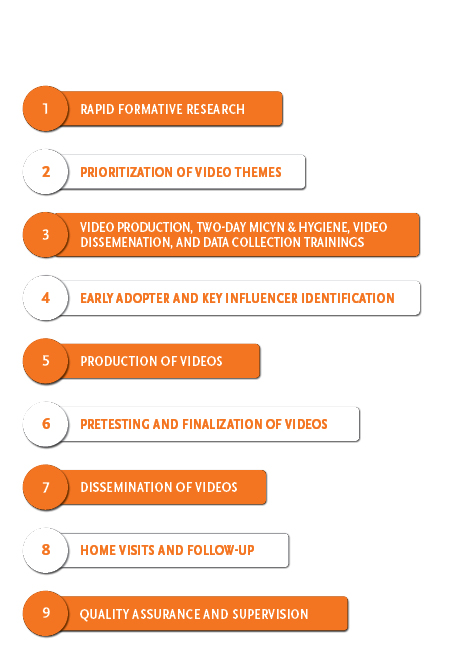 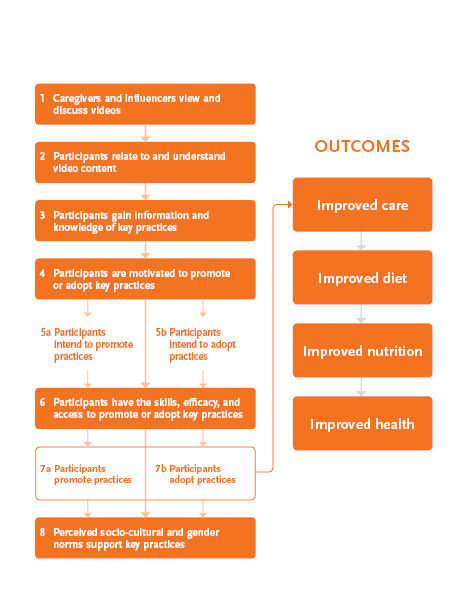 The SPRING community video conceptual framework summarizes the pathways of change through which the intervention aims to improve handwashing and responsive feeding behaviors.

The intervention focuses on sharing information to improve knowledge about, and attitudes toward the behaviors of interest. The videos show actual community members practicing these behaviors, thereby demonstrating to viewers they can develop self-efficacy to practice the behaviors. Finally, by giving members of women’s groups the option to invite people who have an influence on their behaviors to video screenings, the intervention addresses social norms that are important determinants of behavior in the Niger context. 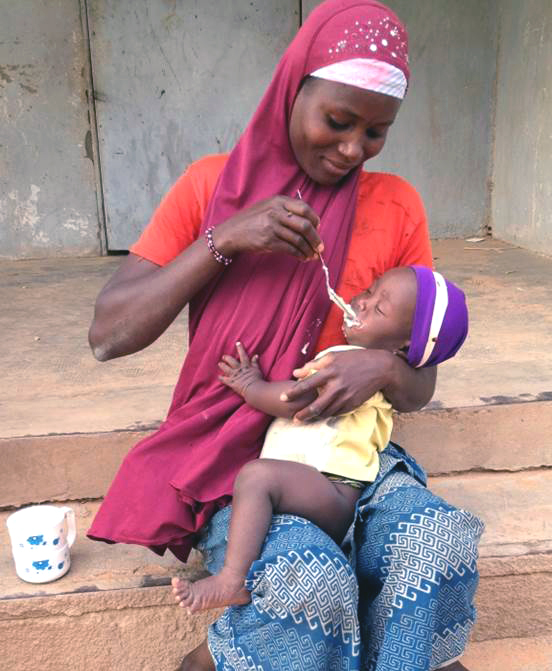 To measure the sustained effect of the community video approach on nutrition and hygiene behaviors.

The household surveys collected information on knowledge, attitudes, self-efficacy, and behaviors related to handwashing and responsive feeding. Indicators assessing behaviors were self-reported except where indicated below, and are explained in greater detail in the following slides.

SPRING worked with local communities to produce a video on improving hygiene behaviors. Behaviors promoted in the video included—

Indicator 1: Presence of a Handwashing Station 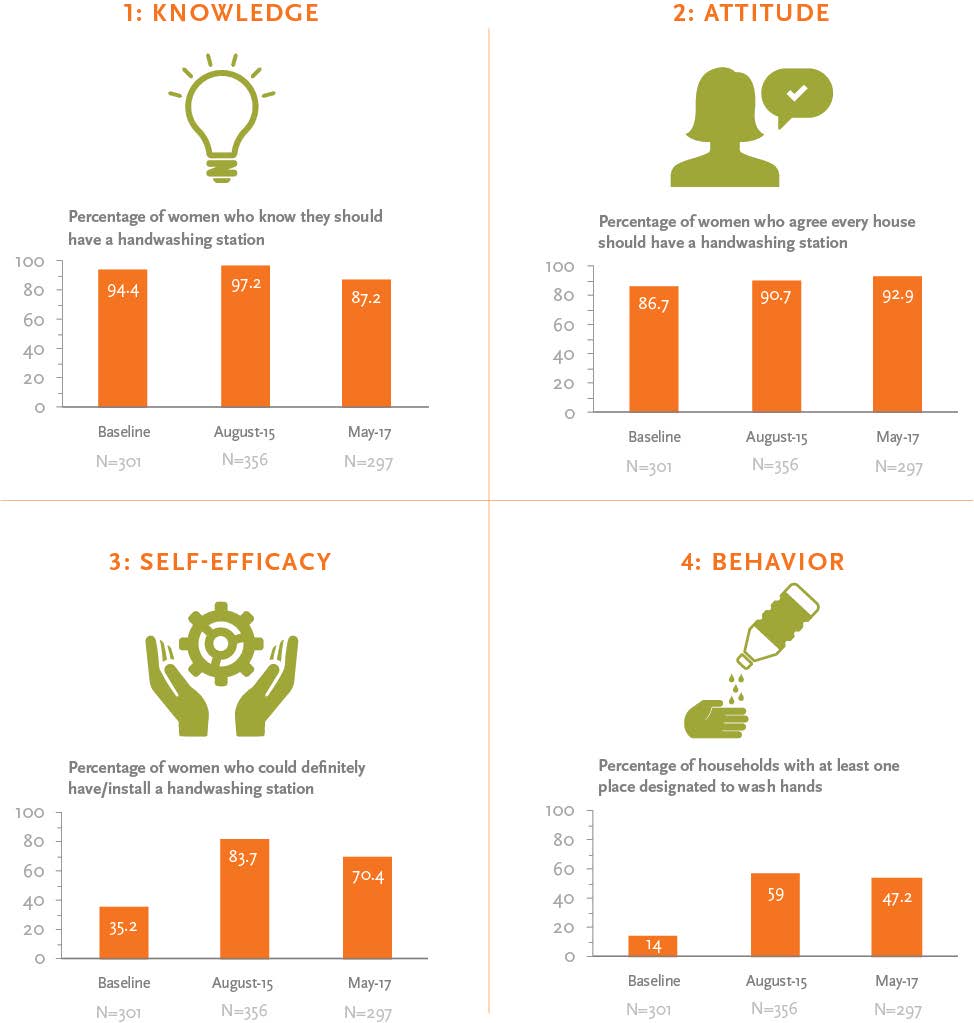 Indicator 2: Handwashing with Soap and Water 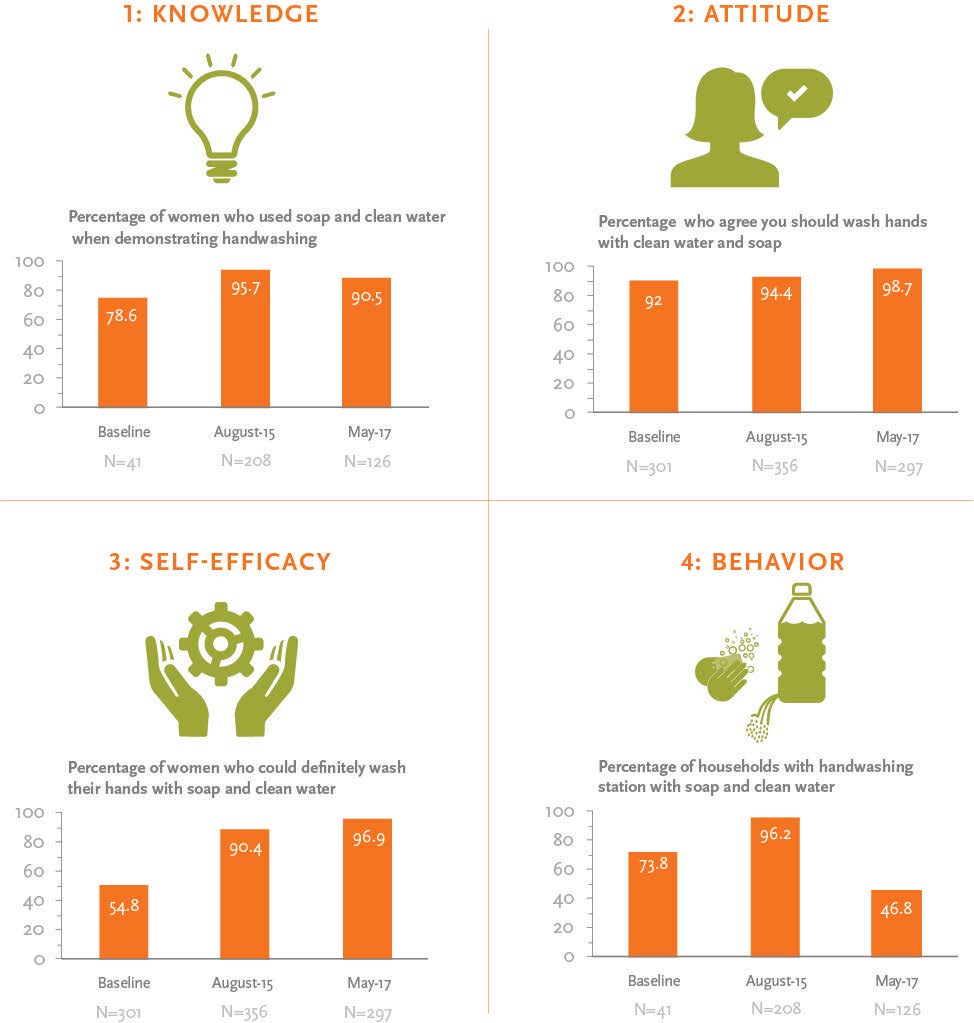 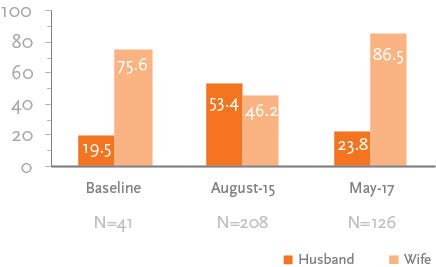 There was an increase in the percentage of husbands who were responsible for maintaining the handwashing station following exposure to the intervention in August 2015. However, this behavior was not sustained two years after exposure to the intervention. By May 2017, 86.5 percent of women reported that they were the primary person responsible for maintaining the handwashing station in the household. 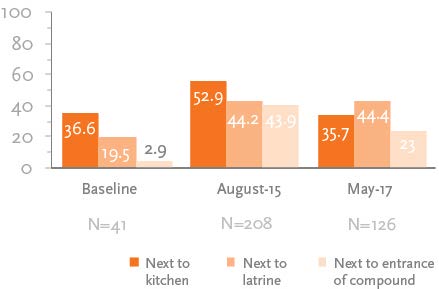 Indicator 4: Households with Handwashing Station Near the Latrine or Kitchen 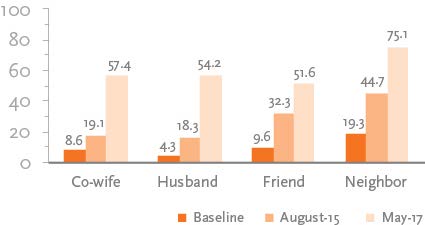 Percentage of Women who Shared Handwashing Message by Person Specified

During the intervention period, SPRING worked with local communities to produce a video that focused on improving responsive feeding behaviors. Behaviors promoted in the video included—

Indicator 5: Child Has a Separate Plate 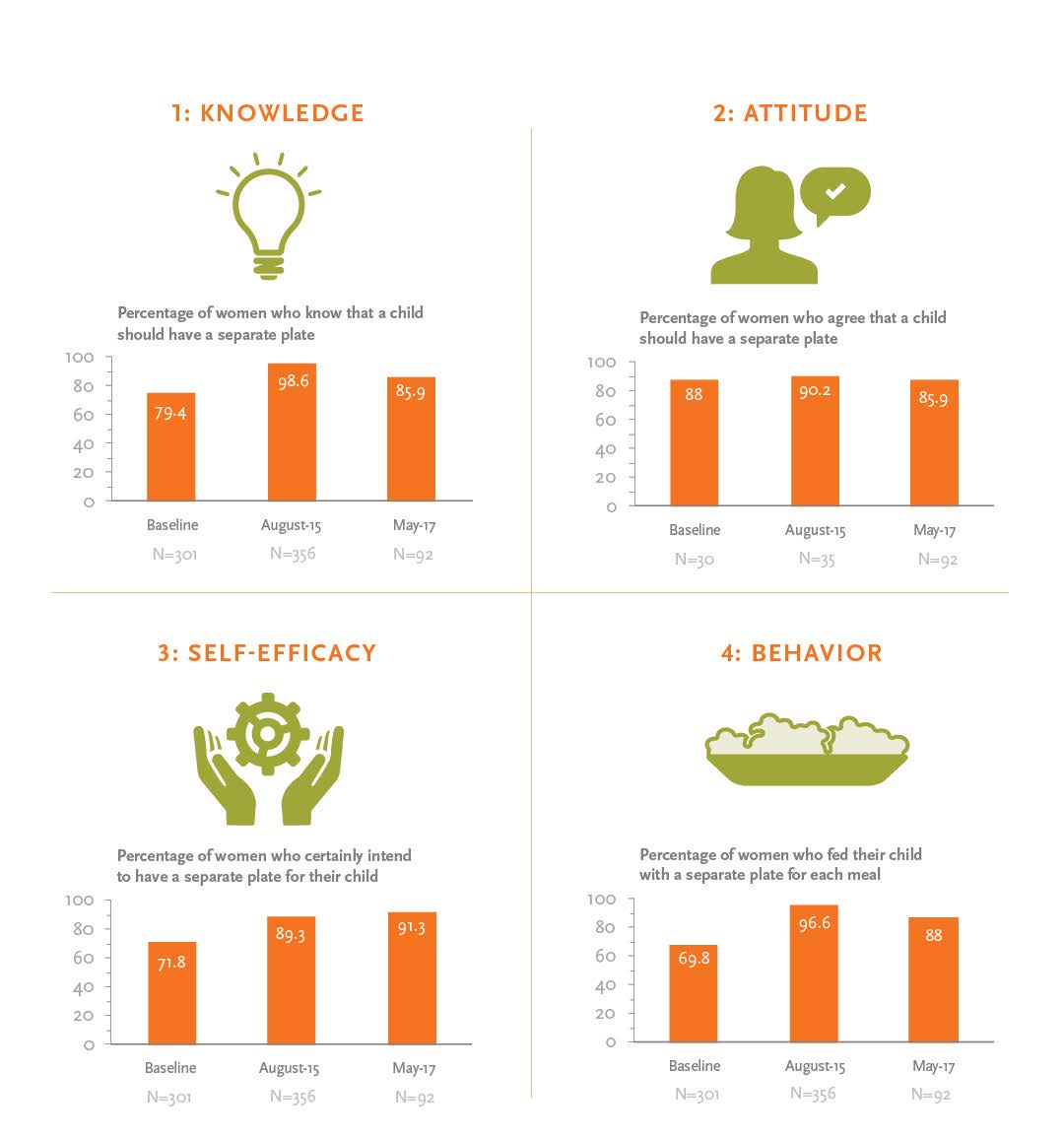 After the intervention, caregivers greatly increased the practice of encouraging their child to eat. Two years later, there was a continued increase in knowledge, attitudes, and self-efficacy related to providing encouragement to the child to eat, but a decline in the percentage of women who actually carried out the practice. Despite this decline, this measure of responsive feeding* was still higher than at baseline.

*Responsive feeding was calculated based on a battery of 20 validated questions that have been shown to measure if a caregiver is actively feeding the child. 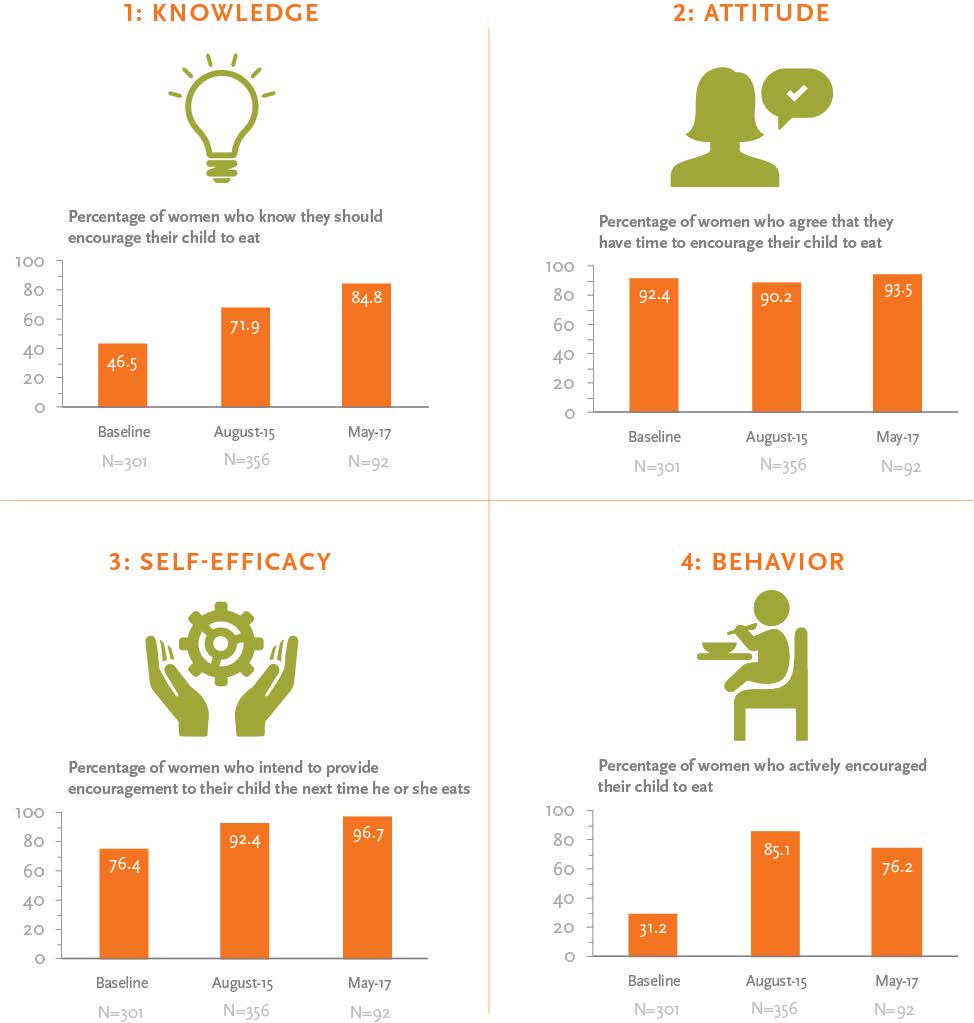 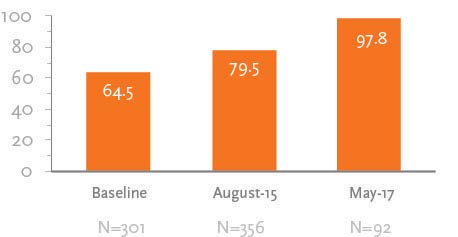 Indicator 7: Responsible Person was Less than an Arm’s Length Away from Child

Among women who had a child between 6-23 months of age during the intervention and who currently have a child in this age category, we asked if they had a responsible person less than an arm’s length away at their child’s last meal. We found that at baseline, approximately two-thirds of women said a responsible person was an arm’s length away from their child at the last meal. This increased to nearly 80 percent two months following the intervention and to approximately 98 percent two years following the intervention. 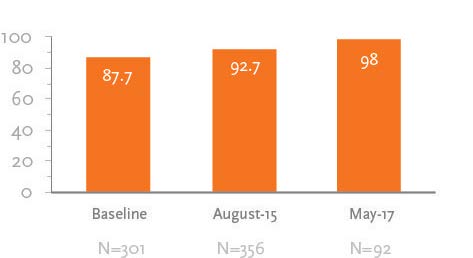 Indicator 8: Child was Helped by a Responsible Person at Their Last Meal 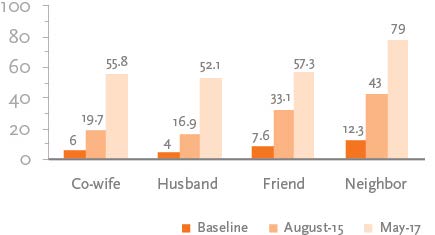 The community video approach encouraged participants to promote information from the videos with others in the community. We found that there was considerable and continued increases in sharing of information related to responsive feeding. Among women who were exposed to the community videos, we found that at baseline, less than 15 percent had held conversations on responsive feeding with co-wives, husbands, friends, and neighbors. Two months following the intervention, information sharing increased significantly; these increases were even more significant two years after the intervention.