Summary of Findings on Nutrition Financing in Kisoro and Lira Districts, Uganda 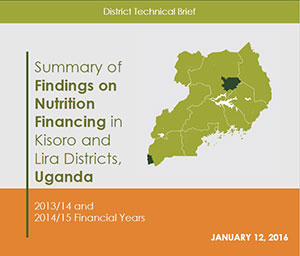 In 2011, the Government of Uganda (GOU) committed itself to the Scaling Up Nutrition (SUN) principles, which resulted in the development of the Uganda Nutrition Action Plan (UNAP), 2011‐2016. The plan outlines how the GOU intends to fulfill its commitment to ensure food and nutrition security for all Ugandans (Government of Uganda 2011). The ultimate goal of the UNAP is to reduce levels of malnutrition among women of reproductive age, infants, and young children.

The “Pathways to Better Nutrition” (PBN) study, led by the SPRING, explores how the GOU prioritizes nutrition interventions and supports the implementation of the UNAP to reach its chosen goal of reducing undernutrition. Within this larger work, SPRING, in collaboration with Deutsche Stiftung Weltbevoelkerung (DSW), explored whether the GOU and its development partners made the necessary investments to enable the roll‐out of UNAP activities in two selected districts – Lira and Kisoro. The study covered two financial years: 2013/14 and 2014/15.

As with the national PBN analysis, conducted from 2013‐15, this district‐level budget analysis followed the UNAP activity framework for defining nutrition activities and covered the four sectors named in UNAP—education; health; agriculture (or production); and gender, labor, and social development—as well as water, to derive figures on nutrition‐specific and ‐sensitive allocations. Data were collected from publicly available district budgets, regional referral hospital budgets, and budgets from the nongovernmental organizations (NGOs) and development partners (DP) implementing nutrition‐related programs.

This brief highlights work undertaken in Lira and Kisoro to estimate the amount of funding going toward nutrition‐related activities across funders and sectors during the study period. The brief concludes with a description of the analysis, results, and key recommendations for stakeholders’ consideration.

In collaboration with DSW, SPRING conducted qualitative and budget interviews between April‐ August, 2014, and again between February‐March, 2015 in Lira and Kisoro districts. These districts were selected based on the active presence of nutrition partners, relative progress in rolling out the UNAP, and availability of district‐representative data to inform study findings. DSW conducted the district‐level budget analyses in Lira and Kisoro through review of relevant budget documents. SPRING used the same methodology to conduct the national‐level budget analysis . The following groups participated in the budget interviews:

SPRING and DSW collected and reviewed district‐approved budgets, sector work plans, budget performance reports, CSO budgets and work plans, hospital budgets, and work plans from both districts. The full methodology for budget analysis at the national and district levels in Uganda can be accessed at: http://www.spring‐nutrition.org/pbn.

The following steps were taken to identify, validate, and analyze nutrition‐related allocations in the two districts:

These nutrition budget analyses include a margin of error due to incomplete information from some sources and the inexperience of district‐level officials with nutrition budget analysis. However, the estimated results provide a credible indication of how Lira and Kisoro districts, and other implementing agencies, determine budget allocations for nutrition‐related activities.

SPRING’s analysis of Lira district revealed that the total budget allocations for nutrition in the district fell from Shs 5.3 billion in 2013/14 to Shs 4 billion in 2014/15. This reduction can be attributed to reductions associated with the suspension of the National Agricultural Advisory Services (NAADS) funding, as well as measurement error due to limited budget information provided by NMS and by donors for off‐budget funding in 2014/15.

Off‐budget information provided by six NGOs (World Vision, PLAN Uganda, Concerned Parents Association, Volunteer Efforts for Development, Development Training and Research Centre, and Send a Cow) implementing projects in Lira district shows that, in 2013/14 and 2014/15, Shs 2.23 and Shs 1.38 billion respectively were budgeted for nutrition‐related activities. In 2013/14, NGO funding made up 42 percent of the overall district nutrition allocation. This number fell to 34 percent in 2014/15, largely due to sharp reductions in funding by two of the NGOs that had previously contributed 64 percent of the 2013/14 external funding for nutrition. Three other NGOs reported slight increases or no change to their funding levels, while one additional NGO only reported funding for 2014/15.

We found that on-budget nutrition allocations for the four UNAP sectors and water were Shs 1.38 billion in FY 2013/14 and Shs 1.02 billion in FY 2014/15, representing 7.7 percent and 5.0 percent, respectively, of the total district budget allocations for the five sectors. During 2013/14, the GOU funded over 78 percent of on‐budget nutrition‐related allocations. This dropped only slightly to 70 percent in 2014/15. Nutrition‐related allocations under the education, water, and community‐based services sectors were entirely funded by the GOU in both years, as were on‐budget allocations under UNAP Strategic Areas 1.2 (Addressing gender and socio‐cultural issues that affect maternal, infant, and young child nutrition), 3.2 (Promoting social protection interventions for improved nutrition), and 4.1 (Strengthening the policy and legal frameworks for coordinating, planning, and monitoring nutrition activities).

Similarly, there were significant nutrition‐related on‐budget funds for essential nutrition supplies provided by the NMS and LRH in both years. LRH reported Shs 1.58 billion in 2013/14, and a modest increase to Shs 1.64 billion in 2014/15. NMS reported Shs 81.2 million in essential nutrition supplies in 2013/14, nearly three‐quarters of which was directed to LRH. NMS subsequently failed to report its nutrition‐related budget for 2014/15.

According to available data, total nutrition‐related allocations in Kisoro District also fell, from Shs 2.6 billion in 2013/14 to Shs 1.6 billion in 2014/15. As in Lira district, the apparent reduction in total nutrition‐related allocations in Kisoro can be attributed to the suspension of NAADS funding and lack of budget information from NGOs and NMS in 2014/15. In 2013/14, nearly half (43 percent) of the nutrition allocation was budgeted by NGOs, none of which provided information for 2014/15.

Off-budget information provided by six organizations (Compassion, United Organization for Batwa Development in Uganda, SPRING, Harvest Plus/Africa 2000 Network, RECO, and FHI 360) implementing projects in Kisoro district shows that in 2013/14 and 2014/15, Shs 1.1 billion and Shs 58 million, respectively, was budgeted for nutrition‐related activities. Again, this apparent drop in funding is mostly attributed to poor reporting by implementing partners in 2014/15. To complicate matters, the only NGOs and DPs that reported allocations for 2014/15 did not provide information for 2013/14, preventing a comparative analysis even among donors during the two years.

The total on-budget nutrition allocations for the four sectors named in UNAP and water increased from Shs 1.44 billion in 2013/14 to Shs 1.54 billion in 2014/15, representing 8.0 percent and 6.1 percent, respectively, of total nutrition allocations within the five sectors. During 2013/14, the GOU funded over 65 percent of the on‐budget nutrition‐related allocation. This dropped to just over half (56 percent) in 2014/15. Nutrition‐related allocations under education, water, and community based services sectors were entirely funded by the GOU, as were on‐budget allocations under UNAP Strategic Areas 1.2, 3.2 and 4.1.

NMS reported 32.2 million in 2013/14, nearly half of which was designated for essential nutrition supplies for Health Centre (HC) III’s (subcounty‐level health facilities), but failed to report its 2014/15 nutrition‐related allocations.

Budgeting for nutrition was new to most officials in Lira and Kisoro districts. Most officials found it difficult to identify nutrition‐related activities and ascertain what percentage of their district’s budget was allocated to these activities (specific and sensitive), since this study was their first introduction to the process.

While nutrition was generally associated with the health sector, this study documented a high percentage of nutrition‐related spending in the agriculture sector, in particular as related to food production. In both districts, the production sector reported the highest proportion of nutrition‐related allocations, followed by the health, water, community‐based services, and education sectors. The majority of budget allocations were for nutrition‐sensitive interventions or programs, with few sources reporting significant amounts of nutrition‐specific funding.

While the UNAP mandates that all government agencies and lower local governments (LLG) mainstream nutrition activities in their work plans and budgets, this has not yet happened. As a result, most district officials interviewed were not familiar with the UNAP and thought of nutrition only as a health sector issue. This was an important finding given that most nutrition funding in Lira and Kisoro districts is allocated from sectors other than health. Low levels of awareness at the district level about the importance of nutrition activities has led to poor prioritization of these interventions, and insufficient investment in the financial and human resources required to deliver meaningful nutrition‐related services. When thinking about district‐level difficulties in identifying nutrition programs and associated funding, the absence of an enabling legal framework to support the scaling up of nutrition activities in LLGs should be considered. Currently, government agencies are not legally obligated to prioritize nutrition in their work plans and budgets. Some respondents in this study suggested the need for expeditious passage of the Food and Nutrition law.

Based on study findings and analysis, SPRING offers the following recommendations to improve nutrition planning and budgeting at local government levels: