Using a Quality Improvement Approach in Facilities and Communities in Ghana

Enhancing Nutrition within the First 1,000 Days 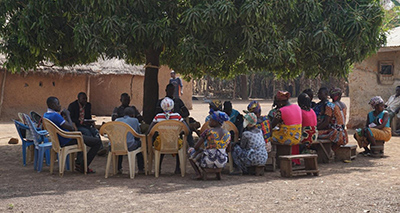 Since 2014, USAID’s flagship multi-sectoral nutrition project, SPRING, has worked in 15 districts in the Upper East and Northern Regions of Ghana, which are part of the Feed the Future zone of influence (figure 1). Despite recent progress in health and nutrition indicators throughout Ghana, regional disparities remain, especially in the north. According to the 2014 Ghana Demographic and Health Survey, 19 percent of children nationally are stunted, a condition characterized by low height for age due to chronic undernutrition. In the Northern Region, the situation is more severe, with 33 percent of children stunted. Anemia is another significant public health problem, with a national childhood anemia rate of 66 percent. In the Northern and Upper East regions, this prevalence jumps to 82 and 74 percent, respectively. There are also high rates of anemia among women of reproductive age, with a prevalence of 48 percent in the Northern Region and 40 percent in the Upper East Region. SPRING is a seven-year USAID-funded cooperative agreement dedicated to strengthening global and country efforts to scale up high-impact nutrition practices and policies and improve maternal and child nutrition outcomes. SPRING provides technical support to prevent stunting and maternal and child anemia in the first 1,000 days, from pregnancy through age two. 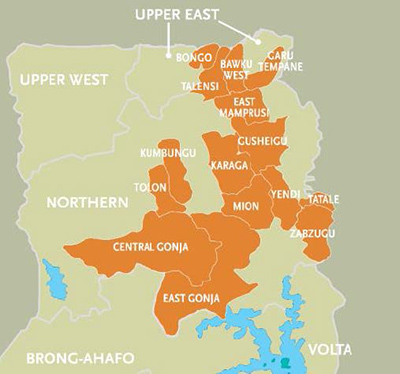 In Ghana, the project links the sectors of nutrition, WASH (water, sanitation, and hygiene), and agriculture, and employs social and behavior change communication approaches at all levels.1

In an effort to reduce the high rates of stunting and anemia, SPRING partnered with the Ghana Health Services (GHS) to build the capacity of health workers and community health volunteers (CHVs) to provide infant and young child feeding and nutrition counseling and anemia prevention and control across 15 districts in the Northern and Upper East Regions. These efforts strengthened the knowledge and practices of health workers and CHVs to deliver nutrition services at the facility and community levels. 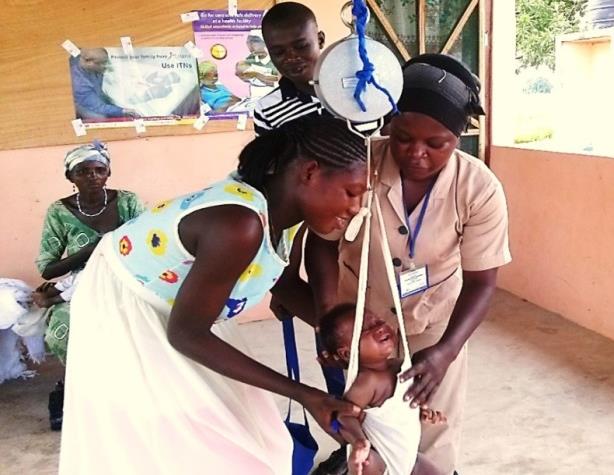 A CHW weighs a baby at a child welfare clinic in Garu District.

The QI approach is based on a facility- and community-owned problem-solving process that seeks to identify and fill gaps using low-cost, locally feasible solutions. QI consists of systematic and continuous actions that lead to measurable improvements in health care and has demonstrated success in strengthening service delivery. QI is unique in its approach to improving services because it allows team members (from health facilities or community groups) to identify problems on their own and work together to create positive change. Unlike supportive supervision techniques that rely on a supervisory relationship and depend heavily on the supervisor identifying and suggesting solutions, the QI approach encourages group ownership of problems and solutions. By helping groups invest in their own improvement, QI can produce small, helpful, and sustainable changes in facilities and communities.

SPRING designed the QI program on two fronts: at health facilities (F-QI) and in communities (C-QI). F-QI focused on the introduction of teams of health workers to solve nutrition service delivery bottlenecks, while C-QI focused on the introduction of teams of community members within existing groups (e.g., village health committees, women’s and farmers’ groups, and village savings and loans associations) that were linked together into a community system to address nutrition. For both F-QI and C-QI, we created training curricula and accompanying slides to add a visual component to the capacity-building sessions. These materials discuss the QI process and allow participants to work through examples of problems and identify possible solutions.

The QI model is widely used for problem solving. It is an iterative process of four steps—plan, do, study, and act. In Ghana, a team approach was used to implement the model. 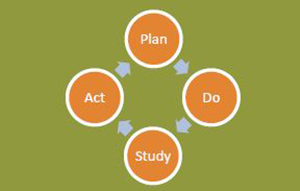 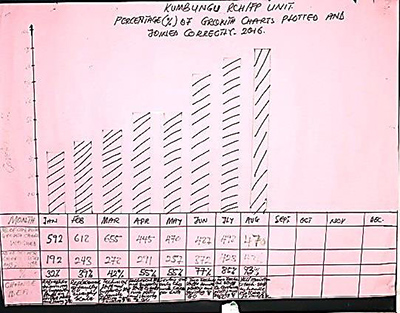 We used both F-QI and C-QI teams in the same implementation areas so that they could help each other improve in a complementary manner; communities would benefit from improved nutrition services at facilities that serve them, and facilities would see increased community demand for their services. Thus we implemented F-QIs first to improve services, then created C-QIs to boost demand for those services. For both F-QI and C-QI, SPRING used a process improvement approach to establish teams and monitor their performance.2 In both F-QI and CQI, the teams implemented the QI model of plan, do, study, act (PDSA) (figure 2) to allow continuous improvement as ‘change ideas’ are created, tested, implemented, and adapted. The steps in the PDSA cycle are detailed below. 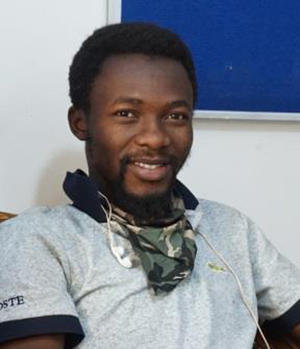 Kobik Williams works for the Behasun Integrated Development Organization (BIDO), a Tamalebased NGO hired by SPRING to help implement C-QI. Kobik is one of three BIDO staff trained as a C-QI master trainer, and works with 15 communities in the Tolon and Kumbungu Districts of Ghana’s Northern Region.

Kobik sees the C-QI approach as a way to get communities to do things for and by themselves, and to promote ownership of solutions. He says the best coaches “lead from the sidelines” by providing support to improve team stability through routine meetings.

The communities he works with have focused on the issues of child welfare clinic (CWC) and antenatal care clinic (ANC) attendance, handwashing, and feeding liver to children. The biggest challenge is that they often want to skip steps in the QI process, but by encouraging them to use the PDSA model, he helps them be better able to identify problems and solutions.

Teams brainstorm change ideas and select one. They create an action plan to test the selected “change idea” (solution).

Teams meet at least once monthly to draw graphs showing progress against their indicator.

The QI coaches support the teams to adhere to QI principles, including the PDSA cycle, while team members are responsible for identifying the quality to improve, analyzing the root cause, developing change ideas, testing the selected change idea, and measuring the outcome. 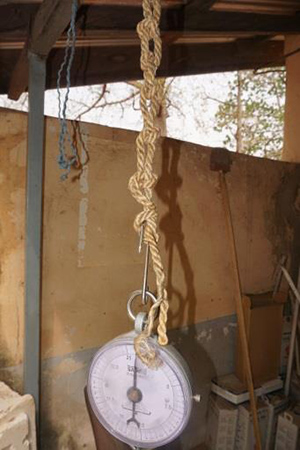 In Kumbungu district, the FQI team realized that errors in recording child weight occurred when the scale was not hanging at eye-level. Tying a series of knots in the rope holding the scale helped the nurses place the scale at the appropriate level, leading to more accurate weight readings.

SPRING formed 150 C-QI teams in the seven selected districts. SPRING partnered with four local nongovernmental organizations (NGOs) to form C-QI groups, obtain buy-in from community leaders, and provide ongoing support to ensure adherence to the process and trouble shoot initial issues and problems as they arose. The NGOs trained 176 C-QI coaches, most of whom are CHVs or community health nurses.

Every community has formal and informal networks, and SPRING’s C-QI approach sought to leverage these resources to address nutrition. The partner NGOs mapped the various groups to ensure the community was well-represented by the C-QI team. Individuals representing groups such as mother-to-mother support groups and water and sanitation management teams were asked to join the CQI team and use their networks and contacts to help gather more information. The C-QI teams had from seven to fifteen members from a variety of backgrounds to fully represent the nutritional needs and demands of the whole community. 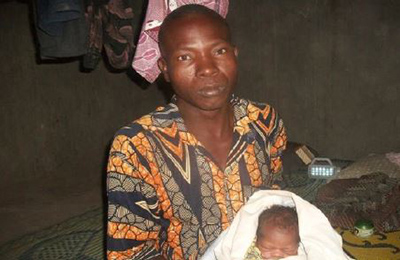 The C-QI team in the Talendom community, Tatale-Sanguli District, identified low ANC attendance as a problem. Its change idea was to encourage husbands like Obori Liliyiba to accompany their wives to the health facility and attend ANC check-ups and delivery. At first, Obori was concerned about the cost, of such services, but the C-QI team told him how to get a free National Health Insurance Scheme card, which lowered the cost of an attended delivery from 200 cedis to 30 cedis (approximately $45 to $7). Obori’s wife gave birth to a healthy baby boy on November 11, 2016 at a health facility.

The F-QI teams used the PDSA cycle to identify a number of change ideas that led to actions tested at community level, including community meetings (called durbars), household meetings, and direct counseling for husbands and couples, all of which improved attendance at ANCs and CWCs. Teams used experienced nurses to provide on-the-job growth chart plotting training (or reinforce previous training) to other nurses and CHVs. The teams used quantitative data that they displayed in charts pasted to the facility walls to measure progress.

C-QI teams identified a variety of strategies to improve nutrition for 1,000-day households, including—

The C-QI teams used the PDSA cycle to choose a number of changes ideas to pursue. They found that engaging families at the household level encouraged changes. For example, in the Lingungunlinbo community in Tatale-Sanguli District, the team identified the root cause for low CWC attendance to be the long distance to the clinic. The team’s change idea involved sensitizing men to help ensure transport to the clinic for their wives and children. Through this, the monthly CWC attendance rate for children in the community increased from 52 percent to 100 percent in only four months.

Some F-QI teams reported challenges in meeting regularly because members had other work responsibilities, were reassigned to other sites, or had been sent off-site for training. The majority of performance problems stemmed from not adhering to the meeting schedule. Another challenge was mindset. Health facility staff, for the most part, did not initially think it was their role to identify problems and make changes that might improve service quality and user satisfaction. It took time to instill a sense of accountability and empowerment; regular meetings would have accelerated this process.

The most common challenge for C-QI teams was identifying a change idea that could be implemented with community resources. Teams often discussed resource-intensive goals such as constructing a facility or improving water access. Effective coaches helped guide the teams to create simpler, more feasible change ideas and solutions to problems in their communities.

Use of data for decision making requires a level of discipline and analytical thinking that was new to many members of C-QI groups. It took time and guidance for many groups to appreciate the value of quantitative assessment regarding their identified gap(s). Additionally, specific data were sometimes difficult to get from facilities whose data systems were not designed to easily disaggregate for specific communities. This often resulted in frustrating delays in information requested by C-QI groups.

QI emphasizes team empowerment to identify, analyze, and resolve nutrition challenges at the facility and community levels. In Ghana, SPRING found QI to be an effective tool for improving local nutrition problems and service delivery bottlenecks. Though facilities often hold trainings for staff and receive supervisory visits, the QI approach enables facility staff to work as a team on specific challenges over time. By identifying, prioritizing, and proposing solutions to problems, staff enacted sustainable changes in their facilities.

QI efforts in communities allow individuals to mobilize and take ownership of solutions to local problems. C-QI teams are formed with members from existing community groups and utilize local resources (as opposed to established as a parallel system), which results in synergies with other community-based initiatives. The C-QI team members, many of whom participate in a variety of community-based groups, disseminate messages on recommended practices to households through their respective networks and channels. Furthermore, whole communities commit to addressing problems like low clinic attendance and lack of exclusive breastfeeding. SPRING’s C-QI approach also facilitates stronger links between communities and the health facilities that serve them, leading to more productive interactions and improved service delivery.

The capacity created by building on existing structures for QI, at both the facility and community levels, provides a solid foundation for expansion to other facilities and communities. Expanding the QI culture and approach can result in benefits to more people on a wider variety of problems areas. SPRING’s QI approach empowers local action for change and complements national-level quality improvement initiatives.