Alive and Thrive: Scaling Up Infant and Young Child Feeding Programs in Bangladesh, Ethiopia, and Vietnam 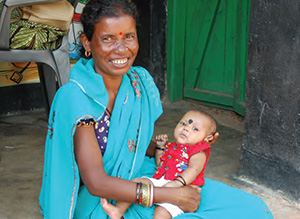 Few attempts have been made to scale up infant and young child feeding (IYCF) interventions. The initial mandate of Alive & Thrive (A&T) was to design, implement, and test strategies that could be brought to scale to improve breastfeeding and complementary feeding among children in Bangladesh, Ethiopia, and Vietnam.

A&T implements multi-component programs that make strategic use of data to plan, assess, and evaluate program impact to improve child feeding practices. The aim is to disseminate the models and the learnings widely, encouraging adaptation or replication of at-scale implementation in other settings. Each program consists of four components: (a) advocacy, (b) interpersonal communication and community mobilization, (c) mass communication, and (d) strategic use of data. In three countries, A&T set out to create proof of concept that IYCF programs can be delivered at scale, resulting in widespread behavior change.

For example, formative research methods in Bangladesh were adapted from the ProPAN (Process for the Promotion of Child Feeding) research methodology developed by the Pan American Health Organization/World Health Organization and included surveys, focus group discussions, observations, food attribute exercises to identify perceived benefits and barriers to consuming particular foods, and trials of improved practices (TIPs) to test the feasibility of recommended behaviors. The research was conducted with a variety of audiences, including mothers, family and community influencers, and health personnel. The research identified barriers, facilitators, perceptions, practices, and beliefs regarding IYCF. A media audit was also conducted, to understand the media landscape, identify the most popular media outlets, determine which audiences would be best reached through mass media, and identify the most appropriate channels and dissemination plans.

Interventions in the three countries were designed to respond to the findings of formative research and media audits, including these insights:

Program evaluation was carried out using a cluster-randomized design at baseline and endline in intervention and comparison areas. Results showed that A&T’s multi-component model achieved behavior change when implemented at scale, as demonstrated by the early results of the process evaluation conducted in 2013 (one year before the endline). The results show a difference of 24 percentage points between exclusive breastfeeding in “intensive” areas (where the interventions included interpersonal communication and mass media) and “non-intensive” or mass media–only areas in Bangladesh, from 2010–2013. Additionally, the percentage of children meeting minimum dietary diversity recommendations in Bangladesh doubled. In Ethiopia, from 2010–2013, there was an 8-percentage-point increase in exclusive breastfeeding in A&T intervention areas. The percentage of children aged 6–23 months consuming four or more food groups (minimum dietary diversity) and the percentage of children aged 6–23 months fed the minimum recommended number of times (minimum meal frequency) doubled. In Vietnam, in areas where only a mass media campaign was used, rates of exclusive breastfeeding increased by 24 percentage points (from 18% to 42%) from 2010–2013. In areas with mass media campaigns and interpersonal counseling through social franchises, rates of exclusive breastfeeding increased by 44 percentage points in three years.

Alive & Thrive is an initiative to save lives, prevent illness, and ensure healthy growth and development through improved breastfeeding and complementary feeding practices. Good nutrition in the first 1,000 days is critical to enable all children to lead healthier and more productive lives. In its first five years (2009–2014), Alive & Thrive demonstrated that innovative approaches to improving feeding practices could be delivered with impact and at scale in three contexts: Bangladesh, Ethiopia, and Vietnam. Alive & Thrive is now supporting the scale up of nutrition programs by applying and adapting tested, proven approaches and tools in contexts such as Burkina Faso, India, and Southeast Asia. With its emphasis on learning and innovation, Alive & Thrive is expanding its focus in Bangladesh to maternal nutrition and taking a more multisectoral approach in Ethiopia.

A&T is funded by the Bill & Melinda Gates Foundation and the Governments of Canada and Ireland. Managed by FHI 360, Alive & Thrive builds on lessons learned through its partnership with seven organizations.2