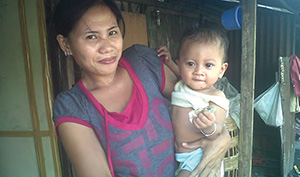 Sidoarjo in East Java province is a region of Indonesia where overall child nutrition is quite poor. The Global Alliance for Improved Nutrition (GAIN) is implementing an integrated approach to stunting reduction that includes access to nutritious foods and supplements, access to safe drinking water, better hygiene practices, and health systems strengthening, as well as a large behavior change component promoting appropriate feeding practices for children under two years of age and improved maternal nutrition.

The intervention uses mass media, including television commercials, and community mobilization through social activities centered on women’s groups. The behavior change component focuses on three key feeding behaviors for children under two, using multiple channels: mass and social media, community activation and interpersonal counseling in the health center. The mass media campaign theme is built around a social activity common in the communities, sharing chitchat or gossip. The main characters are (a) the ”gossip lady,” a silly but lovable character who always comments on the behavior of other mothers, (b) key authority figures such as grandmothers or midwives, and (c) the good mother, who is targeted by the gossip lady but actually demonstrates the good nutrition-related behaviors that need to be promoted.

The intervention design was based on a theoretical framework developed by the London School of Hygiene & Tropical Medicine (LSHTM). The formative research methodology relies in part on extended observation of participants—in the present study this was conducted by video in participants’ homes. This method allowed the capture of participants’ observable behavior as well as their reported actions. Findings identified the need to focus on three key behaviors and use non-conscious motives to help drive change in these behaviors.

Findings on infant and young child feeding and related behavioral insights were used to structure a creative brief for development of a campaign theme, three TV commercials, and a community activation program. A creative marketing agency translated the insights into an aspirational concept, which was pre-tested before the mass media campaign plan was finalized and community intervention begun.

During the creative design process, the GAIN project design team collaborated with the academic team of the LSHTM and the design team of Playgroup, an Indonesian commercial creative agency. This multidisciplinary team—despite posing some challenges—guaranteed a rich, interactive, and imaginative process. The academic team provided careful scrutiny of proposed storyboards and creative strategies to ensure that behavior change principles were consistently applied and translated into creative solutions. The creative team used their extensive knowledge of the Indonesian culture and context to ensure grounding of formative research insights and behavior change principles in a lively and socially appropriate narrative.

Health professionals often lack the skills, tools, or time to provide nutritional guidance to patients and community members. On the other hand, formula manufacturers use large marketing budgets to wield undue influence and enforcement of national regulations governing the marketing of breast milk substitutes is weak. 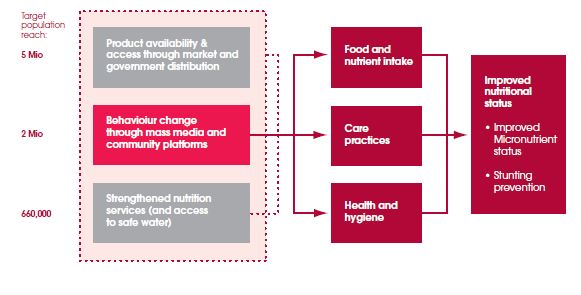 GAIN is an international foundation driven by the vision of a world without malnutrition. It acts as a catalyst—building alliances between governments, business, and civil society—to innovate and deliver solutions for impact at scale. The London School of Hygiene & Tropical Medicine is a world-leading center for research and postgraduate education in public and global health. The Hygiene Centre is a multidisciplinary group dedicated to improving hygiene and sanitation.

1 Note that this is a context-specific recommendation, which may not be appropriate in other contexts