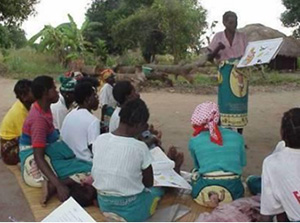 Courtesy of Food for the Hungry.

Between 2005 and 2010, Food for the Hungry (FH) applied the Care Group (CG) model in Sofala, Mozambique, with the aim of reaching more than one million pregnant women and women with children 0–23 months to decrease malnutrition in children in this age group. The program focused on nine key behaviors in the areas of maternal and child health, nutrition, WASH, and preventive care.

The CG model uses interpersonal communication, in the form of frequent one-on-one and small group meetings with mothers, with the goal of improving child survival and reducing malnutrition in children 0–23 months. In this project in Mozambique, the program aimed to reach every pregnant woman, every mother of children under five, and their influencers in the catchment area.

The CG design ensured that every household with a child under five was consistently visited by a Care Group Volunteer (CGV), also known as a Leader Mother. Using the CG model (Figure 1), paid community health workers (Promoters) created 5–10 groups consisting of 12 volunteers each, called a Care Group. The CGVs were trained by the Promoter every two weeks, for a total of 52 hours of training per year. CGVs were often the elected representative of a group of 12 mothers or families and therefore tended to live in the same area and share the same culture, education, and background as the beneficiary families. After each Care Group training, each CGV shared the information with 12 women, called “neighbor women,” through group meetings and home visits. CGVs targeted neighbor women who were pregnant or had children under two years of age. CGVs visited neighbor women every two weeks, providing 13 hours of training per year. The CGVs used communication tools such as flip charts, stories, and songs to communicate key information. 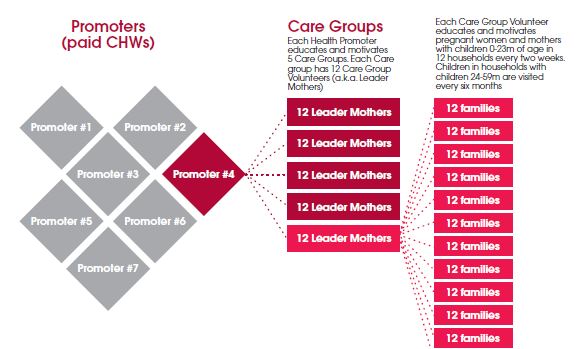 Before developing the CG lesson plan and materials, FH conducted formative research with pregnant women and mothers of children under five years of age. Insights gained were used to identify which behaviors to address, how to design messages for greater impact, and on which behavioral determinants to concentrate to increase adoption of each key behavior. A Local Determinants of Malnutrition Study (a rigorous Positive Deviance inquiry) identified several key behaviors and determinants highly associated with good nutritional status and provided insight into positive deviants (community members who find uncommon ways to strengthen their health using the same resources available to others).

Next, four barrier analysis studies were conducted, focusing on exclusive breastfeeding (EBF), hand washing with soap, oral rehydration solution/zinc, and point-of-use water treatment. The results identified determinants of key behaviors. For example, findings indicated that doers were more likely than non-doers to believe EBF was less expensive, allowed a child to “grow well,” and was more achievable if the mother ate a balanced diet. Focus group discussions with mothers also provided insights on several motivators and barriers to EBF. For example, traditionally, caregivers felt that younger children needed water and daily herbal teas when they were sick, and extra food to grow strong.

Key messages were determined, including the promotion of handwashing with soap, eating foods and recipes rich in specific nutrients, and eating an extra balanced meal daily (for lactating mothers). The messages also emphasized the lower cost of EBF.

FH utilized conceptual frameworks and theoretical models, including social network science, persuasion literature, positive deviance, the health belief model, and the theory of reasoned action, to design the program and evaluate its effectiveness. Insights from formative research were used to develop lesson plans and messaging for communication materials (flip charts). The model also ensured that mothers were continually reached by CGVs, who were chosen by the mothers themselves.

During the five-year period of the intervention, Sofala experienced a 29 percent decrease in under-five mortality (an average from two project areas reached within 54 months) and a 37 percent reduction in child underweight. From 2009 to 2010 there was a 42 percent reduction in underweight in project communities and a 78 percent increase in EBF. The average annual rate of decline in undernutrition in intervention areas was 2.2 percent compared to 0.4 – 0.6 percent nationwide. The intervention reached more than one million people, including 219,617 beneficiaries comprising of children 0-5 months and women of reproductive age. Over 90 percent of neighbor women had contact with the CGV every two weeks and 78 percent of neighbor women had someone else present during home visits, which helped further amplify key messages.

The project cost for all seven districts in Mozambique was US$3,024,166, equaling US$0.55 per capita. The cost per beneficiary per year was US$2.78. The estimated cost per disability-adjusted life year (DALY) averted was US$14.72 and the cost per life saved was US$441.

Organizations: Food for the Hungry and Feed the Children

Feed the Children is an international relief and development organization whose vision is a world where no child goes to bed hungry. Along with their affiliate, World Neighbors, they serve people in more than 18 developing countries. They currently operate Care Groups in Malawi and are introducing CGs in nine other countries.

Care Groups in Other Settings