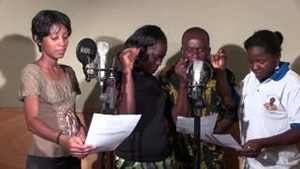 Development Media International (DMI) implemented a cluster randomized controlled trial (RCT) in Burkina Faso to measure the impact of mass media on child mortality. RCTs of mass media campaigns are not feasible in certain settings, because of the need to exclude national radio and television stations. Burkina Faso was chosen because of its uniquely localized, radio-dominated media environment with very low national radio penetration. This allowed for local FM community radio stations to broadcast messages to intervention areas without “leaking” into control areas, and without losing the aggregate power of the media.

DMI and the London School of Hygiene & Tropical Medicine (LSHTM) created a mathematical model that predicts how many children's lives could be saved by mass media campaigns in various countries. The model predicts that child mortality could potentially be reduced by 16–23 percent in several developing countries. It also predicts that the cost per life saved may be significantly lower than with other child health interventions. The mass media RCT trial in Burkina Faso aims to test the predictions of the model.

The three-year trial in Burkina Faso used radio broadcasts to affect a range of behaviors—including exclusive breastfeeding; water, sanitation and hygiene; and treatment-seeking behavior (for malaria, pneumonia, and diarrhea symptoms)—in order to improve child survival. DMI developed a broadcasting schedule, which weighted messages about behaviors based on those behaviors’ predicted impact on mortality. For example, messages targeting treatment-seeking behavior (for malaria, pneumonia, and diarrhea, the three leading causes of child mortality in Burkina Faso) were allotted many more weeks of spot broadcasting than messages about complementary feeding.

Sixty-second radio messages were aired 10 times per day in six languages for 35 months. In addition, in-depth, two-hour radio dramas were broadcast five nights per week on each station, representing a total of 70 hours of live radio per week. Scriptwriters attended weekly training workshops and participated in pre-testing and feedback research. In exchange for airtime, DMI provided each radio station with focused capacity building to improve its organizational and technical ability as well as their capacity to sustain broadcasting.

DMI employs a saturation+ approach,1 which includes broadcasting at high intensity, in appropriate languages, and on popular stations; using rigorous modeling to maximize and measure impact; and developing stories, based on research, that entertain and persuade the appropriate audience to adopt healthier behaviors for themselves and their families.

DMI and LSHTM created a mathematical model that predicts how many children's lives could be saved by mass media campaigns in various developing countries. The model measures the impact on child and maternal mortality for each behavioral message. It uses evidence from previous behavior change campaigns and national coverage data for each behavior. Results predict which messages are likely to have a higher impact in terms of lives saved.

The mathematical model predicts that in Burkina Faso, more than 13,000 under-five deaths could be averted each year through a national mass media campaign.

Data from formative research on health topics and gray literature were used to create message briefs for scriptwriters. Each brief contained information on the behavior to promote, any existing data on the prevalence of the behavior, barriers/obstacles to behavior change, influencing factors or levers to facilitate behavior change, and the influencers/decision makers relevant to the behavior. Scriptwriters then used the message briefs to create dynamic radio spots and longer format dramas that promoted the desired outcome behavior, including necessary information and targeting different influential audiences.

Feedback research, which was integral to the intervention, was conducted throughout the campaign among men, women, and community leaders using focus group discussions and individual interviews in rural communities. This research investigated message recall, frequency of audience exposure to messages, self-reported behavior change, and continued barriers to change. These data were continually collected (through approximately monthly research trips) and used to modify messages throughout the trial. Sample findings from feedback research included:

As an example, based on these insights, a key message was designed to target older female relatives in radio messages about the benefits of colostrum.

A midline survey of 5,000 mothers from all seven intervention and control zones was conducted by LSHTM after 20 months of broadcasting. Preliminary results, represented in Table 1, show that the 10 key behaviors (including breastfeeding; water, sanitation and hygiene; and treatment seeking) all improved in the intervention zones (showing increases from 9.3% to 25.5%).

In total, approximately 2.5 million people were reached through radio broadcasts in Burkina Faso during a 20-month period. Initial estimates of the model for a national campaign predicted a cost of 5–15 U.S. dollars (USD) per disability-adjusted life year (DALY) averted.

Table 1. Changes in behavior from baseline to midline [preliminary results]

Figure 1. The difference between changes in the intervention and control zones as compared to message frequency (in weeks) 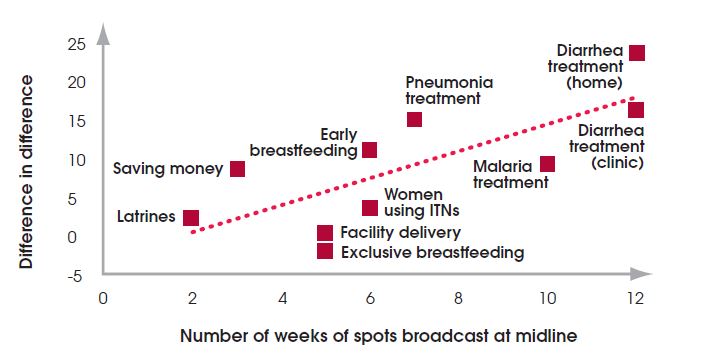