Mumbai’s suburban railroads serve over seven million daily commuters; with 2,000 train lines spread over 465,000 km. Besides serving as rail service infrastructure, the railroad tracks are often the shortest pedestrian route between common destinations. With few effective physical barriers and over 1,000 trespassing points, the rail service experiences over 36,000 fatalities per year. Final Mile was engaged to design solutions to reduce fatalities.

A behavior architectural approach was taken to reduce unsafe behaviors around the trains. New signs were produced consisting of dramatic photos without text and placed close to the tracks (to increase emotional impact of signs). Train engineers were instructed to hit the horn with short, staccato bursts a certain distance from crossing points (because people pay attention to intermittent noises more than constant noises). Finally, yellow lines were painted at regular intervals on the tracks (because people are bad at judging train speed and distance from the viewer without reference points).

Final Mile conducted qualitative research asking people in the target population to identify “other people’s” risky behavior and motivations. Participants spoke of “others’” habitual practices in crossing train tracks or using the tracks to relieve themselves, and routinely expressed overconfidence in their own ability to judge train speed. Their responses also implied an attitude of “private optimism,” that train accidents are things that happen to other people. 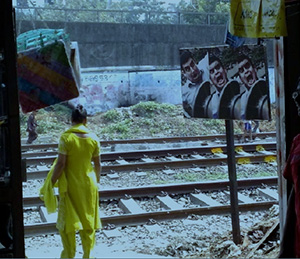 The following findings and concepts were used to underpin intervention design:

Within six months of implementation, the number of deaths fell and was sustained over the next year and a half (Figure 1).

Figure 1. Number of deaths by month 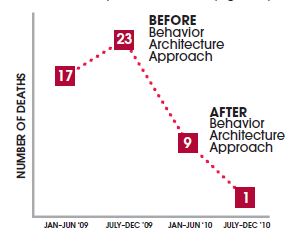 Final Mile is a behavioral architecture agency that explains and influences behavior to meet marketing, organizational, and social objectives by applying learning from cognitive neuroscience and behavioral economics.