Levels of micronutrients added to fortified foods in Uganda must meet the standards set by the Uganda National Bureau of Standards (UNBS). These levels are set to significantly increase the population’s micronutrient intake of vitamin A, iron, and iodine to help reduce micronutrient deficiencies. These deficiencies can only be managed if the fortified products contain adequate nutrients.

Figure 1: vials of Flour solutions during testing for iron with icheck iron 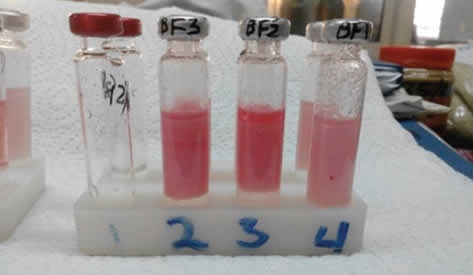 SPRING supports the UNBS in collecting and testing micronutrients in fortified foods. Traditional methods for testing vitamin A, such as high performance liquid chromatography (HPLC) and atomic absorption and ultraviolet spectrophotometry (AS and UV-S) for iron, are expensive and time consuming to administer. The UNBS is actively searching for alternative testing methods.

Because iCheck™ test kits are promoted as alternative rapid methods for quantitative testing, UNBS acquired the machines and sought to independently validate the iCheck method against established methods used in Uganda. Efficient testing of food fortification improves compliance because non-conformity to standards can be remedied swiftly.

The USAID-funded SPRING project in Uganda compared the performance of iCheck test kits in measuring levels of iron, iodine, and vitamin A in fortified food samples against the performance of traditional methods to validate its effectiveness.

We followed the manufacturer’s (BioAnalyt) testing procedures for the iCheck kits and standardized protocols for the conventional methods.1 The iCheck tests use a correction factor to adjust for the natural nutrient content of unfortified oil or flour. We tested the validity of the kits’ correction factor by testing unfortified samples of oil or flour that had been collected, along with fortified samples, from local manufacturers and the Ugandan market.

Test of Vitamin A in Flour with iCheck Fluoro

Test of Iron in Flour against AAS using iCheck

Table 1 shows that repeatability of measuring vitamin A levels in oil was good for the iCheck, as compared to UV-S. Table 2 shows the iCheck method has good robustness. We calculated the average vitamin A content of unfortified wheat flour using the iCheck Fluoro to be 0.68 mg/kg. This is in line with the value of 0.65 mg/kg suggested by BioAnalyt as a correction factor. However, the content of vitamin A in fortified wheat flour, tested on two separate days using iCheck Fluoro (with the application of the correction factor of 0.65 mg/kg) gives a coefficient of variation (CV) of 30.1 and 18.5 percent, respectively (Table 3).

Testing of fortified maize flour samples with iCheck Iron had a CV of 47 percent. Results from testing salt samples are in agreement between the iCheck and WYD Iodine checker test; however, the titration result was higher and the variation was lower.

Table 4: Summary of results obtained for vitamin A and iron in flours using iCheck Fluoro and iCheck Iron respectively 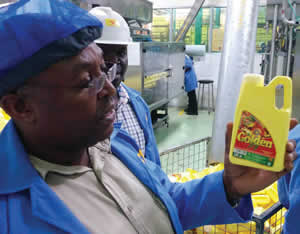 Vitamin A-fortified oil at a factory in Uganda.