Background: While many groups have attempted to define “scale-up,” little research has been done to determine how these definitions affect, or don’t, implementation. Nutrition is a special case for scale-up work since it is not encompassed by any one sector, but requires an interconnection between the health and food systems. Additionally, effective scale-up of nutrition requires an in-depth of understanding of how these systems work together to affect nutrition. SPRING conducted research to understand how implementers understand scale-up and how that understanding may be shaping the way nutrition work is being carried out. 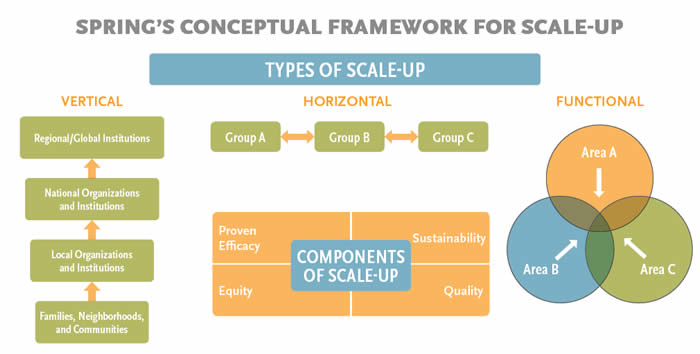 Methods: SPRING conducted interviews with USAID nutrition project staff based in home and country offices. Data from these interviews were analyzed, using SPRING’s conceptual framework of nutrition scale-up, to determine how understanding of “scale-up” affects the development and implementation of nutrition programming, especially when scale-up is an explicitly named objective. Many thanks to the projects that participated in the exercise: ACCESO, Community Connector, FANTA III, LIFT II, MCHIP, Mwanzo Bora, SHIKHA, SPRING, Suaahara, TOPS, Yaajeende.

Results: While horizontal scale-up was the most commonly mentioned, most projects reported implementing multiple types of scale-up in their nutrition programming, as well as addressing multiple components of scale-up. Lacking an official definition, most nutrition projects rely on unofficial or personal understandings of scale-up. Unclear descriptions of scale-up lead to non-uniform methods for tracking and monitoring scale-up work, that may only illustrate limited aspects of scale-up, such as coverage. In addition, this lack of a definition doesn’t allow projects to effectively incorporate the systems thinking necessary to identify forces that will act as barriers or influencers to scale-up interventions.

Conclusions: Scholars generally agree that scale-up encompasses more than just coverage, but also issues of equity, quality, and sustainability.* All of these issues depend heavily on the interactions projects have with the systems within which they are operating. However, without a common understanding of the term that includes this broader view of scale-up, nutrition projects are stymied in their ability to develop programs that appropriately incorporate scale, monitor those programs, or achieve the scale-up they aim for. Effective systems-thinking can help projects address some of these challenges. Overall, projects reported that there is a lack of evidence on how best to reach scale in nutrition and the approaches and types of scale-up processes that are best for nutrition work. On a related note, projects do not agree on what integration does (or should) look like as an effort to support program scale-up. This is not surprising considering that integration for a nutrition project requires interactions with multiple systems, including health, agriculture, etc. Projects do agree, however, that current M&E processes and metrics are insufficient for measuring scale-up. With its role in defining mandates as well as reporting processes, USAID has the influence to affect how projects understand, approach, prioritize, and implement programs to reach scale.