Multi-Sectoral Anemia Efforts at the National Level in Sierra Leone 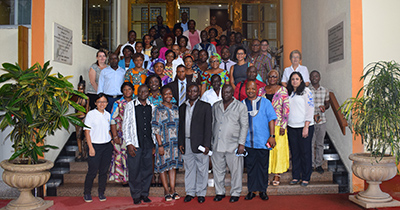 Anemia, a widespread public health problem, affects nearly 25 percent of the world’s population and undermines countries’ progress in health and economic development. Recognizing the scale and complexity of this problem, country governments and global agencies have reaffirmed their commitment to reduce anemia using an integrated multi-sector approach.

Since 2014, USAID SPRING project has supported the Ministry of Health and Sanitation (MOHS) and stakeholders working to reduce anemia in Sierra Leone to strengthen multi-sectoral anemia programming at the national level. This is a country-led process to create evidence-based and context-specific strategies to reduce anemia.

The National Anemia Working Group (NAWG), a multi-sectoral anemia coordination platform, was constituted in 2016. The NAWG, chaired by the MOHS and comprising national stakeholders working to reduce anemia, provides a platform for convening diverse sectors and partners to define and advance Sierra Leone’s anemia priorities.

This report identifies challenges and successes of establishing a multi-sectoral anemia platform in Sierra Leone, explores key factors that led to the outcomes, and identifies potential areas for future progress in reducing anemia. Findings are based on data from two rounds of semi-structured qualitative interviews conducted by SPRING staff with key informants and all NAWG members and observations made by technical assistance providers.

The report concludes with suggestions and considerations for the continuation of the NAWG, dissemination and implementation of the anemia strategy, further engagement of district-level stakeholders, and efforts to advocate for prioritization of anemia at the national and district levels.

Anemia, a widespread public health problem, affects nearly 25 percent of the world’s population. Currently, few countries are on track to meet the World Health Assembly (WHA) nutrition target of reducing anemia by 50 percent by 2025. Women and children in resource-limited settings bear the highest burden of anemia-related morbidity and mortality. Children with anemia have long-term, irrevocable cognitive and developmental delays, and decreased worker productivity as adults (Walker et al. 2007). Iron-deficiency anemia contributes to adverse birth outcomes and is the underlying cause of 115,000 maternal and 591,000 perinatal deaths each year (Stoltzfus et al. 2004). In recognition of the scale of this problem, global and national commitment to addressing anemia continues to rise, shown by the specific focus on anemia in WHA’s six global targets to improve nutrition (WHO 2017).

The causes of anemia are complex and overlapping and include nutritional deficiencies, infections, inflammatory conditions, and genetic disorders (Balarajan et al. 2011). Because of anemia’s multiple causes, interventions that involve various stakeholders and collaboration across sectors—including agriculture, education, health, communication, gender, finance, and water, sanitation, and hygiene—are critical for effective prevention and control efforts.

Momentum for multi-sectoral and integrated approaches to nutrition and a revived focus on anemia are growing globally. Reducing anemia among vulnerable populations is critical to improve nutrition outcomes and to have a positive impact on maternal and child health and survival. The Government of Sierra Leone, with support from SPRING, has worked with national sectors and stakeholders to strengthen multi-sectoral programming at the national level and has created a comprehensive strategy to address anemia.

Overview of the Multi-sectoral Anemia Platform in Sierra Leone

The multi-sectoral initiative to reduce anemia in Sierra Leone, with SPRING support, spanned four years: 2014 to 2017 (see Figure 1). The effort originated from a Ministry of Health and Sanitation (MOHS) request for SPRING’s technical support to conduct an analysis of the anemia landscape. Findings highlighted the high prevalence of anemia and surprisingly low prevalence of iron deficiency. They also underlined gaps in the coverage of anemia-related interventions. These findings prompted in-country stakeholders to establish the multi-sectoral National Anemia Working Group (NAWG) stemming from Scaling Up Nutrition (SUN) efforts. The NAWG is chaired by the Food and Nutrition Directorate, with Helen Keller International acting as secretariat and SPRING providing on-going technical assistance. The NAWG comprises representatives from stakeholders across sectors including agriculture, health, water and sanitation, communication, gender, and finance. The NAWG is responsible for coordinating, planning, implementing, and monitoring in-country anemia initiatives.

Policy-making is complex and dynamic. As countries develop policies and plan to strengthen national nutrition programming, it is critical to understand the process they undertake with respect to commitment, agenda setting, policy formulation, and implementation (Pelletier et al. 2012). Documentation of the process, which identifies key challenges and enabling factors faced by policy makers and implementers, helps countries plan for and improve upon policy formulation and implementation. The aim of this process documentation is to identify challenges and successes of establishing a multi-sectoral anemia platform in Sierra Leone, analyze the key factors that led to outcomes, and identify potential areas for making improvements to the process.

The key informants, all members of the NAWG, were selected to represent a range of sectors/institutions and different levels of involvement. The interviews gathered informants’ perspectives about the NAWG, including function and strategic direction, multi-sectoral coordination and collaboration, anemia strategy development, and sustainability of anemia efforts. SPRING staff members transcribed interview recordings and analyzed each interview for a priori and emerging themes.1 They also reviewed key documents to understand the background, context, and progress of NAWG activities. These documents included anemia stakeholder meeting workshop notes and the Anemia Prevention and Control Strategy. In this report, key findings are organized by steps in the anemia platform-building process.

In Sierra Leone, findings from the anemia landscape analysis were central to engaging stakeholders in NAWG efforts and had a key role in steering its composition, structure, and focus. The anemia landscape analysis collected data from sources including the micronutrient survey, Demographic and Health Survey, and post-event coverage surveys, as well as a literature review and discussion about the current policy environment and existing coordination platforms with in-country partners.

Everybody previously would have said ‘iron,’ and now people are realizing it’s not iron; …it’s WASH, and it’s malaria, and it’s genetics, and it’s perhaps something else as well.

Findings showed anemia is a severe public health problem in Sierra Leone. Prevalence in children under five and women of reproductive age is 76 percent and 45 percent respectively, with little or no improvement since 2008. Results from the micronutrient survey made the anemia landscape analysis particularly useful by providing nationally representative data about the prevalence of risk factors. Surprisingly, iron deficiency was not a main driver of anemia, as prevalence in Sierra Leone is low. Instead, the survey highlighted factors such as infection (especially malaria, respiratory tract, and diarrhea), general inflammation, and potentially genetic blood disorders as key contributors to anemia. This, in turn, revealed a mismatch between the major contributors to anemia and the interventions that were in place to address it, with discrepancies in program coverage. This rich and reliable data gave stakeholders evidence to guide efforts and decision-making.

The NAWG was established shortly following the dissemination of the anemia landscape analysis results. The following components were essential to its establishment:

The directors of Food and Nutrition have been the driving force and have been involved in every working group meeting.

We keep the direct communication going. That is also resource-bound because it’s really expensive calling people up all the time…. It takes a lot of work even when we have partners… we have to really go out of our way— email, call, ‘please this is important.

Coordinating stakeholders across sectors and departments was a central component of Sierra Leone’s anemia platform. This multi-sectoral engagement is an opportunity for actors previously working independently of one another to collaborate in pursuit of the overarching goal of anemia reduction in Sierra Leone. The NAWG has become an active and participatory platform to coordinate anemia efforts. Between January 2015 and August 2017, the NAWG held 10 periodic meetings as well as sub-group meetings for strategy development and review. Themes from stakeholder discussions involving cross-sector collaboration were:

When you talked about anemia being a multi-sectoral problem, nobody quite got it, until we realized, ‘hold on a minute, anemia isn’t due to nutrition…the nutritional aspects are a minor part of the problem.’ So for all this responsibility to be on the shoulders of one person at the Ministry of Health doesn’t make sense…she can’t move the indices herself.

Shortly after its establishment, the NAWG embarked on developing a comprehensive multi-sectoral anemia strategy. Key informants noted that each sector contributed significantly throughout the development process, which fostered cross-sectoral ownership. Key informant lessons from strategy development and next steps for effective implementation included:

Not rushing has…given us time to realize there is other stuff we needed to put in [the strategy], like the social protection and the female education, which we really hadn’t give much thought to at the beginning.

[We] don’t want to leave it at the strategy stage; [we] want to go beyond that and have an action plan so everyone knows what they’re doing and how they’re doing it, and have targets and work toward meeting those targets.

Last year was about getting people together, getting the idea of how anemia is linked to malaria, to HIV, to different sicknesses, so now we think people have some idea about these links, so now it’ll be about actions…I’ll say one of the great challenges is finance. So, I think if we get finance sorted out, it’ll be ok.

Recommendations that emerged from the findings of the qualitative research fall into four areas: the NAWG, the anemia strategy, district-level engagement, and advocacy.

To view the annex, please download the full report above.

1 Quotations in this report are excerpted from the interviews with NAWG members.