Nutrition of Adolescent Girls and Women of Reproductive Age in Low- and Middle-Income Countries: Current Context and Scientific Basis for Moving Forward 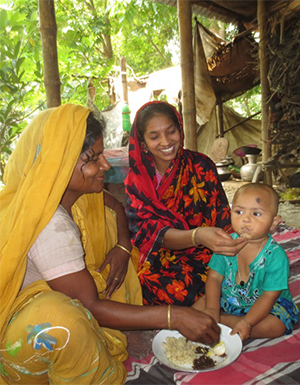 It has long been recognized that the nutritional and health status of a woman before and/or during early pregnancy affects physiologic adjustment to pregnancy and the condition of the periconceptional environment for the embryo, and ultimately the fetal environment. Periconceptional problems, such as low prepregnancy maternal weight, severe iodine deficiency, and folate deficiency, negatively affect pregnancy outcomes. The recognition that early life nutrition affects health in later years, and that in most cases the moment of conception cannot be predicted, has led practitioners and researchers to advocate for a life-cycle approach to nutrition (Horton and Lo 2013). However, comprehensive research is needed to identify optimal practices for improving the nutritional status of adolescent girls and women, before and during pregnancy and during lactation, both for the child and for the woman.

USAID’s Strengthening Partnerships, Results, and Innovations in Nutrition Globally (SPRING) project, along with the Pan American Health Organization (PAHO/WHO), have identified a need for a core set of key practices (similar to those developed for young children), that characterize the diet and feeding practices associated with good nutrition among adolescent girls, women, and pregnant and breastfeeding women. This paper is one of two papers commissioned to provide the relevant scientific and programmatic background to begin to address this goal. This paper summarizes existing information on the current nutritional status of adolescent girls, women of reproductive age (WRA), and pregnant and lactating women in low- and middle-income countries (LMIC). This represents a fundamental first step toward identifying key principles for improving the nutritional status of adolescent girls and women throughout their reproductive years.

The authors reviewed an extensive body of literature to characterize maternal anthropometric status and micronutrient deficiencies, drawing from those cited in the series on nutrition published by The Lancet in 2013 and in The Global Burden of Disease, Injuries, and Risk Factor study (2013). Noting the lack of any other compilation of studies on the dietary intake, the authors conducted a systematic literature review to identify studies of dietary intakes of adolescent girls, WRA, and pregnant and lactating women.

The findings revealed many changes in the nutritional status of adolescent girls and WRA in LMIC. The prevalence of underweight among women has been reduced and is less than 10 percent globally—except in South Asia. The prevalence of overweight and obesity has risen and approaches 50 percent in many regions. Concomitantly, the prevalence of risk factors for chronic disease has risen, indicating that greater percentages of women will enter pregnancy with underlying chronic diseases and are therefore at high risk. Within this environment of change, however, deficiencies of vitamin A, iron, and iodine persist.

Although there are different levels of evidence for specific age groups and for specific regions, the results pointed to a common set of inadequacies in dietary intake (iron, zinc, vitamin A, vitamin C, calcium) regardless of age and reproductive stage. Given the diminished problem of underweight and increasing problem of overweight, efforts are need to identify effective means of facilitating weight loss. Attention must be given throughout the continuum of care—for adolescent girls and WRA—on achieving and maintaining a healthy diet and eating practices.

Download the PDF above to read the full report.