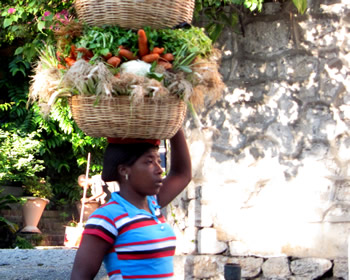 Preventable public health problems in Haiti remain a significant challenge for the country’s development. Haiti has seen limited progress in reducing malnutrition in the past decade. According to the 2005-06 Haitian Demographic and Health Survey (DHS), 29.4% of Haitian children under age five were stunted (a 1.0% increase from 2000), 9.0% were wasted, and 18.1% were underweight (a 5.0% increase from 2000). In Haiti, the HIV and AIDS crisis has generalized. HIV and AIDS affects 1.9% of the adult population ages 15 to 49 (UNAIDS 2009). It is well established that HIV compromises the nutritional status of infected individuals. Integrating nutrition services into the package of services provided to people living with HIV and AIDS (PLWHA) is important.

SPRING conducted this assessment to (a) better understand the national context of and gaps in HIV and nutrition programming at the facility and community levels and (b) determine the availability of elements of nutrition programs that are essential for adults and children (i.e., assessment, counseling, drugs, and food support) at the service delivery levels in Haiti. The study used mixed methods. Quantitative tools were used to assess health facility resources, services, and capacity, as well as health provider knowledge, skills, and practices related to the integration of nutrition interventions within their current portfolio. Semi-structured interviews and open-ended questions were used to learn about the role of community health workers (CHW) and local community-based organizations in promoting nutrition for PLWHA and other vulnerable groups.

The geographic scope of the assessment included the North, West, South, and Artibonite regions of Haiti. Fourteen health facilities were surveyed in total, including six hospitals, seven health centers, and one dispensary. The number of health providers who participated in the survey was 157. Of these health providers, 68 were interviewed in hospitals, and 89 were interviewed at health centers and dispensaries. The findings were commonly disaggregated by type of facility. Note that, because the sample size for dispensaries was low, the categories for health centers and dispensaries have been combined. In addition, key informant interviews were conducted with representatives from 9 non-governmental organizations (NGOs). Semi-structured interviews were conducted with 33 CHWs as well. There were also certain limitations in the research methodology employed. The purposive sampling of health facilities, NGOs and CHWs, makes generalization of the study to other facilities in Haiti a challenge. The report presents a detailed discussion of key findings, including:

The findings from the assessment lead to clear recommendations and next steps for the SPRING program planning and for other nutrition stakeholders in Haiti. Recommendations include to define nutrition assessment, counseling and support services, including validating standard operating procedures for nutrition assessment, counseling, and support (NACS) in Haiti; use innovative approaches such as on-the-job training and clinical simulations, to enhance the capacity of health providers to deliver NACS services; integrate nutrition indicators into the ongoing quality assurance systems in Haiti; strengthen the supervision system; strengthen referral linkages between health facilities and communities; establish a committee to monitor and evaluate NACS activities in Haiti; increase demand for health services at the community level; and conduct a mapping exercise to identify networks and opportunities for PLWHA and other vulnerable populations.