A Simple Method for Making a Rapid, Initial Assessment of the Consumption and Distribution of Iron-Folic Acid Supplements among Pregnant Women in Developing Countries

Download:
See All Series Content
This series of country briefs analyzes Demographic Health Survey data to provide a rapid assessment tool for determining how well the antenatal care system distributes iron-folic acid supplements in developing countries. This brief provides an overview of the series, comprised of this and 21 country-specific briefs, available below or by clicking on the map.

The Global Burden of Maternal and Child Anemia

Twenty-five percent of the world's population (over 1.6 billion people) suffers from anemia (Figure 1) (de Benoist et al. 2008). Anemia is a condition in which there is a deficiency in the number of healthy red blood cells, or less than the normal quantity of hemoglobin in the blood. Iron deficiency anemia (IDA) is associated with 22 percent (115,000) of all maternal deaths (Stoltzfus et al 2004). It is the 15th most important risk factor for total global mortality, and the 13th most important risk factor contributing to the global burden of disease (Ezatti et al. 2006). IDA's effects include increased risk of premature delivery, maternal and child mortality, and negative impacts on the cognitive and physical development of children, and on the physical stamina and productivity of people of all ages (Horton and Ross 2003). 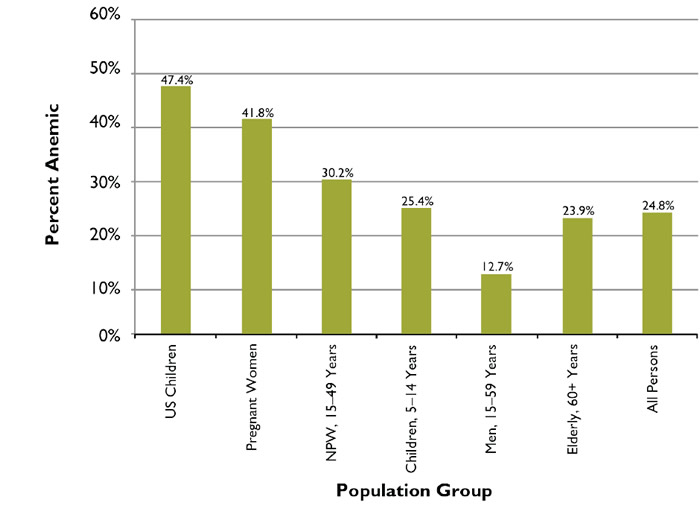 About half of all anemia is due to iron deficiency, a condition caused by inadequate intake or low absorption of iron. Anemia is also caused by inadequate intake of other nutrients, such as vitamins A, B12, zinc and folic acid (Galloway 2003). IDA is more common during pregnancy and in infancy, when physiological iron requirements are the highest and the amount of iron absorbed from the diet is not sufficient to meet many individuals' requirements (Stolzfus et. al 1998). Other causes of anemia include infections—especially helminthiasis infections and red blood cell destruction due to malaria— making anemia a complex and multifaceted health problem.

Globally, more than 600 million (pregnant and non-pregnant) women 15–59 years of age are anemic, accounting for 37 percent of all persons with anemia (Table 1). People living in Africa, Asia and parts of South America are the most at-risk, as shown in Figure 2.

Table 2. Anemia Prevalence by Sub-population and WHO Region

Fifty-five percent of all anemic women 15–49 years of age live in Africa or Asia. Africa has the highest prevalence of anemia among both pregnant and non-pregnant women (Table 2). However, the largest absolute number of women with anemia (38 percent of the global total) live in South and Southeast Asia, more than twice the number of women with anemia in Africa (Table 3).

The highest prevalence and severity of anemia is among children under five and women, due in part to the high iron demands of growth and pregnancy, and exacerbated by frequent pregnancies and short birth intervals (Figure 3).

The prevalence of anemia is high among women of all socioeconomic classes, but its relative risk is greatest among the socially disadvantaged and is directly related to household wealth quintile. Women in the lowest (poorest) quintile are 25 percent more likely to have anemia than those in the highest quintile because they are less likely to be able to afford foods rich in iron and other micronutrients, and are likely to have less access to services that can help prevent or control anemia (Balarajan et al. 2011).

As is the case with many diseases, economic growth has been found to contribute to lowering the prevalence of anemia. The impact, however, is limited; even doubling a country's Gross Domestic Product (GDP) has been found to reduce anemia by only about 25 percent (Alderman & Linnemayr 2009). Thus, in most countries, economic growth alone will require an unacceptably long period of time—many decades—before anemia is no longer a major public health issue. At the same time, anemia also undermines economic growth: a study of 10 developing countries estimated median annual losses in productivity due to iron deficiency to be four percent of GDP (Horton and Ross 2003).

Table 3. Number of Women (in millions) with Anemia by Status and WHO Region

Given anemia's multifaceted nature, an effective program to address it requires identifying its specific causes in a given setting and population, and using a cross-sectoral and integrated approach. Programs to control and prevent anemia involve multiple public and private sectors—such as agriculture to make iron-rich foods available, the commercial sector to make iron-fortified foods available, and the health sector to ensure that women and children receive appropriate services like bednets, deworming, and iron supplementation.

The supplementation of iron-folic acid (IFA) tablets during contact with antenatal care (ANC) providers is one of the oldest and most common anemia control programs. WHO recommends that all pregnant women receive a standard dose of 30–60 mg iron and 400 μg folic acid beginning as soon as possible during gestation (WHO 2012). Ideally, women should receive iron-containing supplements no later than the first trimester of pregnancy, which means ideally taking 180 tablets before delivery.

While many countries have had ANC-based IFA distribution programs for decades, their coverage rates are often low and their potential impact on anemia is not realized. The growing rates of antenatal care coverage provide an opportunity for improving the coverage of IFA supplementation and achieving greater progress on MDG 4 (Reduce Child Mortality) and MDG 5 (Improve Maternal Health), making this an opportune time for reviewing the causes of the disappointing performance of anemia programs, while keeping in mind that IFA supplementation (and this particular distribution mechanism) should constitute only a part of the strategy to prevent and control anemia.

SPRING has developed a method for making a rapid, initial assessment of the strengths and weaknesses of the distribution and consumption of IFA supplements in ANC programs, based on secondary analysis of Demographic and Health Survey (DHS) data. The method makes use of population-based surveys from a nationally representative sample of all women in the country to identify country-specific quantitative measures to assess the relative significance of four sequential points at which IFA supplementation programs for pregnant women commonly falter:

The method constitutes a decision tree analysis of four interactions of pregnant women and the ANC delivery system. It shows the likelihood of not fulfilling the requirements of each of the sequential, necessary, but not sufficient conditions required to ultimately achieve consumption of the ideal minimum number of IFA tablets. By tracking women's entry into and movement through the ANC system and comparing the number of IFA tablets they received and consumed to the ideal minimum number of IFA tablets, it provides a simple, initial assessment of the system. Although this initial assessment cannot identify the specific cause(s) of a system's faltering performance, it identifies the point(s) at which the system is weak, which constitutes an essential, evidence-based, first step in improving the functioning of the system. The findings help to prioritize follow-up activities and research to better understand the causes of the identified shortcomings, such as the need to: improve the IFA supply chain, make the IFA tablets more appealing, improve provider prescribing behavior or provider counseling, increase women's compliance or identify additional distribution channels to provide greater access to IFA supplements.

Please Note: References are included in the download, available at the top of the page.