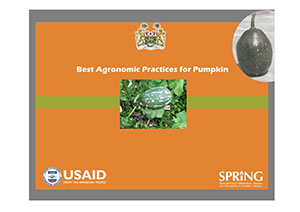 In Sierra Leone, the diet of pregnant and lactating women and that of children 6 to 23 months old (1,000-days households) are deficient in vitamin A-rich foods. This is thought to be a contributor to the very high rates of stunting among children in rural Tonkolili District. Pumpkin – a food quite rich in vitamin A - is widely consumed by families in Tonkolili district. Formative assessments in the form of Barrier Analysis (BA) and Trials of Improved Practices (TIPS) have shown that one of the main barriers to the consumption of pumpkin by 1,000 days households is the lack of access to pumpkin during the off-season.

SPRING developed maternal, infant, and young child nutrition (MIYCN) counseling cards that include images and key messages to promote the consumption of vitamin A-rich foods – such as pumpkin – by 1,000-days households. As demand for vitamin A-rich foods is expected to increase in the near future due to promotion activities targeting the household level, we expect that demand for pumpkins will increase. SPRING also conducted an adapted value chain analysis of the pumpkin value chain to identify ways to improve the profitability of growing and selling pumpkin and to improve access to and affordability of pumpkin on the part of 1,000-days households. This analysis revealed that most pumpkins are produced by households for their own consumption and seldom find their way to market due to the transport expense. The analysis, therefore, recommended promoting an increase in the number of farmers who grow pumpkins in their backyard gardens in the off season as well as an intercrop in the fields, along with promoting improved household storage techniques as an effective way to improve access to this nutritious crop by 1,000-day households.

SPRING then worked with our local partner Helen Keller International/Sierra Leone to develop image-based counseling cards to support extension and advisory services (EAS). The cards are designed to be used by key farmers both women and men, agriculture frontline workers, and other EAS providers. The picture-based cards are used to educate members of agribusiness centers and farmer-based organizations on pumpkin production and storage.

The cards were pretested with members of agribusiness centers in Tonkolili in collaboration with the Ministry of Agriculture. Helen Keller International/Sierra Leone then distributed copies to EAS providers and trained them in their use.