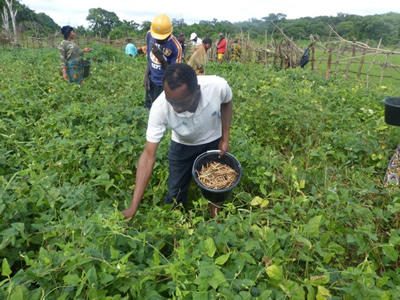 In February 2016, SPRING conducted a formative research assessment to understand local hygiene behaviors and feeding practices for young children in Guinea. The assessment provided valuable information on the beliefs, practices, and challenges related to nutrition practices in the Faranah region of Guinea and served as the basis for a social and behavior change strategy. The formative research focused on identifying nutrient rich foods already available and familiar to families in Faranah and determining ways that those foods could be promoted in 1,000-day households. During a consultative process to review 16 locally-available nutrient-dense agricultural products, SPRING chose two for inclusion in our formative assessment: sweet potato leaves, which are high in Vitamin A, and cowpeas, which have a high protein content. Sweet potato leaves are regularly produced in the dry season, but underemphasized, while cowpeas are usually produced at the end of the rainy season. SPRING wanted to explore how increasing yield of sweet potato leaves and introducing cowpeas could fill observed nutritional gaps during the dry season, especially in 1,000-day households.

To test this new approach, SPRING worked with two women’s groups in the towns of Beindou and Heremakono. Researchers built a demonstration plot to show how to grow cowpeas and sweet potato leaf at the end of the dry season. A total of 50 group members (48 women, plus two male agricultural extension workers) worked on the plots in the hopes of extending the growing season and increasing crop production. Participants planted the cowpeas on May 2, 2016 approximately 1.5 months in advance of the normal planting season. 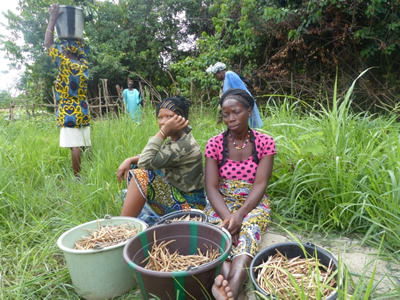 Members of a local women’s group rest after harvesting cowpeas grown during the dry season.

Unfortunately, a review in July 2016 by the SPRING/Guinea team revealed that this new approach did not achieve the anticipated outcomes and that the cowpeas produced fewer beans than the normal rainy season variety. Results from the demonstration plots and analyses of yield data, production costs, and seasonal prices also showed that under current conditions, investments in off-season production of cowpeas could have a negative impact on farmers’ income. According to local growers, the time, resources, and energy used for the production of cowpeas in the dry season would be better invested in more profitable crops that are also nutritious, such as sweet potato leaves and other vegetables like local eggplant, pepper, tomatoes and, in some locations, onions. Based on these findings, local agriculture experts recommend that a better option for increasing cowpea consumption (and increased protein intake) by women and children during the dry season is to focus on improved storage techniques for cowpeas in order to reduce post-harvest losses. Options include using storage bags or containers to hermetically seal cowpeas grown during the rainy season.

SPRING/Guinea plans to build on these lessons learned, promote alternative dry season crops to enhance dietary diversity and protein consumption among our target populations, and explore the promotion of improved storage bags and other post-harvest handling and storage techniques in the coming months.