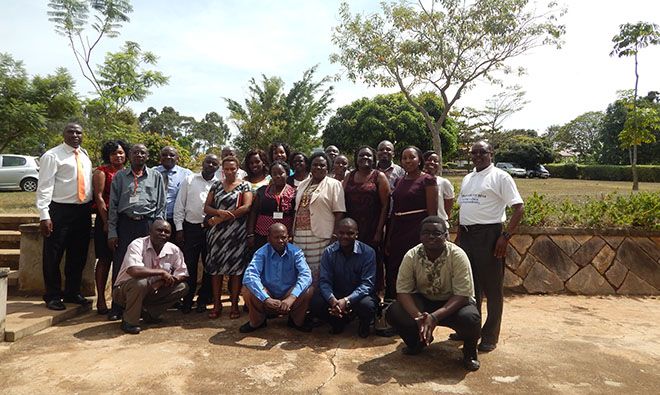 SPRING and the German Foundation for World Population (DSW) organized a multisectoral training workshop from February 9-11 at Bonita Training Center in Wakiso District, Uganda. The purpose of the workshop was to strengthen the Uganda Nutrition Action Plan (UNAP) implementers’ nutrition budget planning and analysis capacity. At the end of the three-day training workshop, representatives from the key government ministries of Trade, Agriculture, Health, Education, Finance, and Gender called for increased nutrition funding at the national, district, and community levels.

While addressing the participants, Mr. Ndorolire William, the Commissioner of Social Services at the Ministry of Finance, Planning and Economic Development, advised the sectors to invest more in nutrition research and to lobby for more funds from the government and other donor agencies. He noted that agriculture research should not only focus on the value chain, but also on nutrition.

Mr. Ngobye Edward, a Senior Economist at the Parliamentary Budget Office, advised the participants that nutrition, as a cross cutting issue, needs more attention by the government. He further noted that there is a legal framework in place, contained in the Budget Act of 2001, that guides the budget process. The participants also learned that a new budget cycle is waiting for the President’s signature.

Mr. Musiimeta Boaz, an OPM Senior Policy Analyst, called for better coordination and planning among the UNAP sectors. He cited the need to work as a team to implement UNAP set actions.

In his closing remarks, Dr. Ssesanga, the head of Nutrition Unit at the Ministry of Health (MoH), thanked SPRING and DSW for organizing the training workshop and further called upon the Office of the Prime Minister (OPM) and SPRING to expedite the case study finding so that the case studies can be used as evidence for planning nutrition interventions.

The training workshop was organized upon the request of the MoH and is part of the Pathways to Better Nutrition (PBN) case study series that SPRING and the UNAP secretariat in the OPM began in 2013 to document the prioritization of nutrition interventions to support the UNAP.