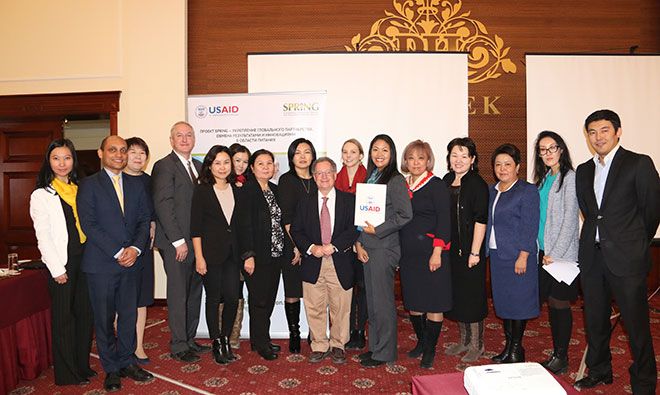 SPRING/Kyrgyz Republic, funded by USAID to address issues of chronic malnutrition and anemia among women and children of Kyrgyz Republic, hosted a round table event on Friday, November 17, 2017 to disseminate the findings from a series of four population-level surveys undertaken by the project over the past four years, including gains in nutrition outcome indicators. The event was attended by representatives of international and national organizations working in the areas of agriculture and nutrition, including the Ministry of Health, USAID, WHO, WFP, UNICEF, the Civil Alliance for Nutrition, and many others.

The surveys revealed positive changes across many nutritional indicators since the start of the SPRING project in 2014. Exclusive breastfeeding practices increased from 29 percent to 63 percent in project implementation areas. Dietary diversity and consumption of green leafy vegetables and fruits also increased significantly among women of reproductive age, and consumption of junk foods among children under one year of age reduced.

Nora Madrigal, USAID/Kyrgyz Republic Health and Education Office Director, highlighted the importance of nutrition as a key driver of economic growth and human development and noted that “the first 1,000-day period of a child’s life – counted from the start of a woman’s pregnancy until a child’s second birthday – is the critical window of opportunity to take action and prevent irreversible damage caused by poor nutrition.”

SPRING builds the capacity of healthcare providers, improves delivery of nutrition services through the healthcare system, links agriculture and nutrition, and promotes optimal nutrition and hygiene practices through community engagement. Since 2014, SPRING has trained over 6,000 healthcare workers, mobilized over 2,600 volunteers, and supported 11 healthcare facilities to obtain Baby-Friendly Hospital Initiative certification.