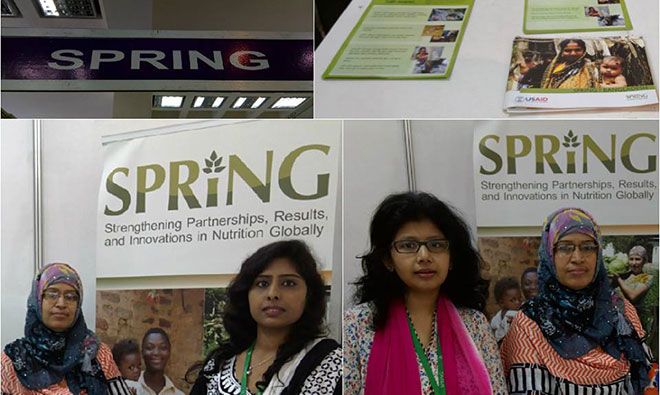 World Breastfeeding Week (WBW), coordinated by World Alliance for Breastfeeding Action (WABA), is celebrated every year from 1-7 August in more than 120 countries. With the vision of a world where breastfeeding is the cultural norm, WABA observed the first ever WBW in 1992.

This year’s theme—“Breastfeeding and Work: Let’s make it work!”—focuses on working women. In the words of WABA, “whether a woman is working in the formal, non-formal or home setting, she needs to feel sufficiently empowered to claim the right to breastfeed on behalf of both herself and her baby.”

SPRING/Bangladesh celebrated WBW by organizing events across Khulna and Barisal divisions to spread key messages on breastfeeding. Our chief of party and deputy chief of party joined in the Khulna celebrations, which included discussions, rallies, and a street drama arranged to raise awareness at both upazila and union levels. We set up breastfeeding corners in health complexes where we carried out counselling sessions. SPRING/Bangladesh also made paper caps for the occasion and distributed them to Farmer Nutrition School participants, invited guests, and others in the community.

In Dhaka, at the inaugural ceremony of WBW on August 2nd, we hosted a health fair booth decorated with posters depicting messages on breastfeeding, nutrition, and hand hygiene. The event’s chief guest, Health and Family Welfare Minister Mohammad Nasim, spoke about the importance of breastfeeding and asked the responsible authorities to set up breastfeeding corners in government and private offices, factories, shopping malls, and educational institutes.