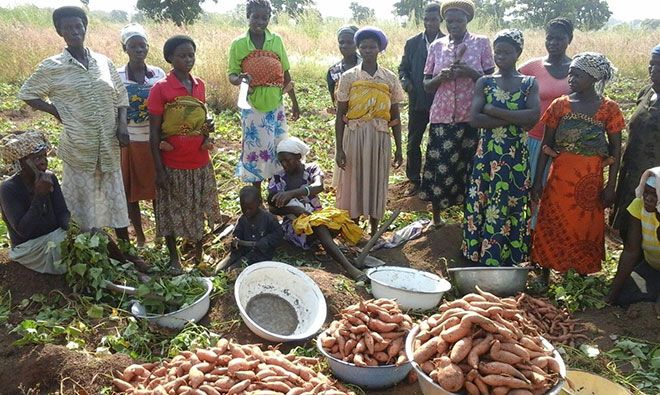 In 2011, vitamin A deficiency was recognized as a significant problem that affects about seven in ten children under the age of five in Ghana and contributes to one in three deaths of children 6-59 months. Consumption of vitamin A-rich foods is encouraged as it is important for improved health outcomes for households—especially for pregnant and lactating mothers and children under two.

SPRING/Ghana, in collaboration with RING and ATT projects, is promoting the cultivation and consumption of orange flesh sweet potato (OFSP) and vitamin A-rich maize as a way of improving vitamin A consumption among 1,000 day households.

Mother-to-mother support groups (MTMSG) within the seven SPRING/RING overlap districts—East Gonja, Central Gonja, Kumbungu, Mion, East Mamprusi, Tatale, and Karaga—have been trained on how to cultivate OFSP. Health providers in these districts are also conducting food demonstrations to teach mothers how to integrate OFSP into their diets.

In the SPRING/ATT overlap districts, Bawku West and Tatale, SPRING supports MTMSGs through the seed provision and farmer field schools (FFS). FFS teach technical knowledge of how to cultivate vitamin A-rich maize. The MTMSGs are groups of no more than fifteen women and include women with children under five and pregnant and lactating women. The groups, led by trained facilitators, meet at regular intervals to discuss issues relating to infant and young child nutrition and to share experiences. New members are referred to MTMSGs by the local health care facility, which also manages care for the area. In all, 1,320 women from 90 communities were trained and supported to cultivate OFSP and vitamin A-rich maize (1,136 OFSP and 184 maize).