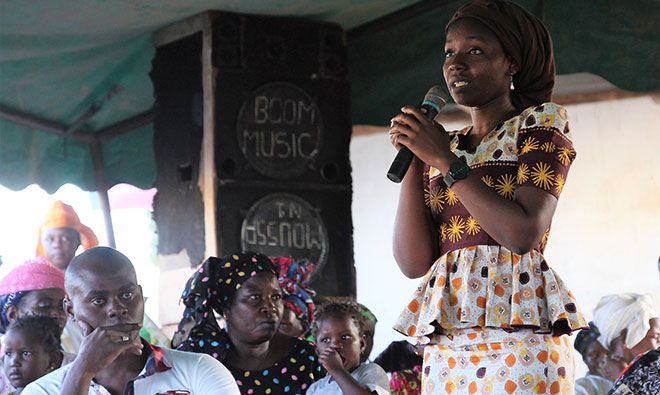 On April 25, 2017, SPRING/Senegal recognized World Malaria Day with local partner l’Association pour la promotion de la femme sénégalese [Association for the promotion of Senegalese Women] (APROFES) and Plan International, an implementing partner of the Government of Senegal’s Cellule pour la lutte contre la malnutrition [Unit for the Fight against Malnutrition] (CLM). The organizations united to hold an awareness event in Dinguiraye Commune, in Nioro Department, which featured speeches and community theatre to share messages with the crowd about the importance of environmental cleanliness in preventing malaria. SPRING/Senegal’s multi-sectoral approach to improving the nutritional status of pregnant and lactating women and children under two years emphasizes promoting household and environmental hygiene practices, which are important to general health and well-being, including having important effects on improving nutrition and on reducing the incidence of malaria. The World Malaria Day event represented an opportunity for programs to collaborate to promote common messages across programs with unique objectives.

The Dinguiraye event promoted behaviors to encourage environmental cleanliness around households, such as eliminating pockets of stagnant water to reduce mosquito hatching grounds and also keeping courtyards clean of animal feces to prevent children from getting them on their hands and mouth. Messages also included the importance of using mosquito nets, the specific dangers that pregnant women who contract malaria may face, and reminders of the importance of prenatal consultations. Because pregnant women and children who contract malaria may suffer more greatly if they are undernourished, linking these messages is important in creating an understanding of good health and nutrition behaviors.

The highlight of the event was a vibrant and well-appreciated community theatre sketch, which told the story of a father who repeatedly ignored warnings to keep his household clean and provide mosquito nets for his family. When his child and pregnant wife become very sick, he is sad knowing that if he had not ignored simple measures he could have prevented their illness.

Local Dinguiraye officials attended the event, including the village chief, a representative of the mayor, city councilors, the community health post’s head nurse, as well local community health workers and representatives of the Nioro District team. A journalist from local radio station RIP FM recorded audio of the event which will be broadcast in the following days to spread the same messages to thousands of community members who were unable to attend the events.

A question and answer session was held at the end of the event to understand to what extent community members had understood the messages. The event ended with SPRING staff distributing hygiene kits, including soap, to the attendees. 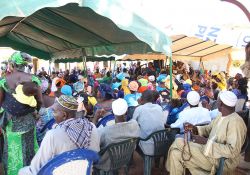 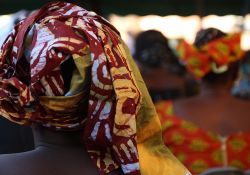 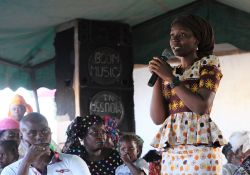 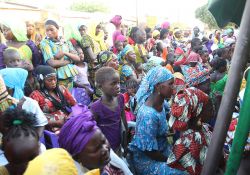 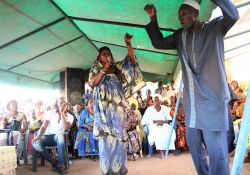 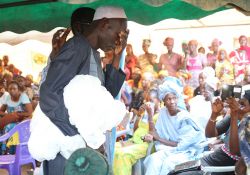 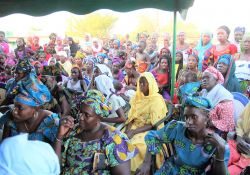 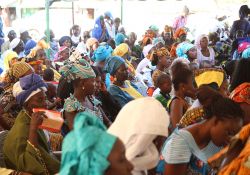