Laying the Groundwork for Behavior Change Strategies in Sierra Leone 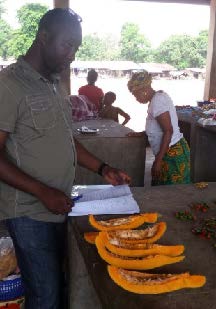 In 2016, SPRING conducted a number of assessments to inform behavior change strategies in Tonkolili district in support of improvements to child nutrition in the first 1,000 days.

A barrier analysis survey was conducted to identify behavioral determinants associated with year-round access to and use of two nutrient-rich foods: fish—the most widely consumed animal protein in the district—and pumpkin—for its high vitamin A content—in households with pregnant women and children aged 6-23 months.

Pumpkin was popular, but only plentiful in the rainy season, and was undervalued as a complementary food. Overwhelmingly, households thought fish was good for a healthy life, but the daily quantity consumed per person was very low. Key determinants that defined consumption level included accessibility, costs, and storage. Most mothers feared buying poor quality smoked or frozen fish, which may be sold days or weeks after being caught.

An adapted value chain analysis for fish and pumpkin used semi-structured interviews and focused on nutrition-sensitive agriculture. The pumpkin season is short (3-4 months). Farm households grow and consume pumpkins regularly during the rainy season and rarely trade them. Households with access to fertile land and safe storage (protected from rodents or hung from the ceiling) also have access during the dry season. Although wholesale prices are low and pumpkins require fertile soil, farmers still produce in the rainy season. The medicinal value for stomach complaints was widely appreciated. 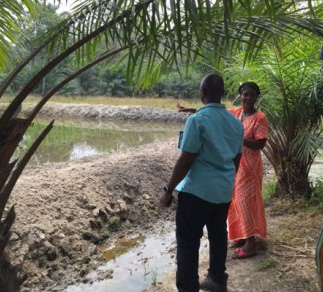 Smoked marine fish provided over 90 percent of fish supplies in Tonkolili and was the only consistently available animal protein for poor families. The state of marine reserves is unknown, but is likely close to the maximum sustainable yield. Aquaculture is not widely practiced and the infrastructure is inadequate. Wild freshwater fish are primarily caught during periods when there is a low demand for agricultural labor, and are generally used for home consumption. Hygiene conditions in most markets are poor, presenting significant risk of contamination, and the cold chain for frozen fish is unregulated and variable.

Trials of improved practices (TIPs) is a qualitative research methodology that pretests behaviors before they are widely promoted. TIPS focuses on what people do, rather than what they know, provides an in-depth understanding of families' preferences and capabilities, and involves households in defining and selecting interventions for uptake.

In May 2016, SPRING used TIPs to select improved water, sanitation, and hygiene (WASH) and nutrition behaviors. The TIPS looked at handwashing with soap at critical times, maintaining a clean home and play environment, safe disposal of feces, and appropriate complementary feeding. Creating handwashing stations and prioritizing soap for handwashing were the most tried and accepted interventions. The most common enabler was the simplified handwashing stations (tippy-taps), built with used plastic bottles.