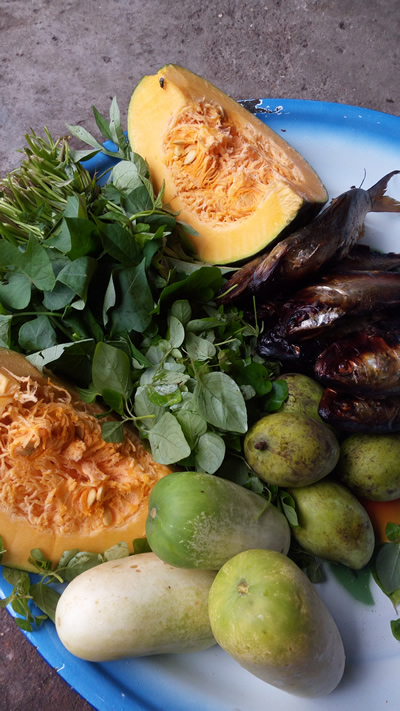 There does not appear to be any refereed journal paper about any aspect of pumpkin growth, processing, marketing or use in Sierra Leone. The publicly available bibliographic database, PubMed, includes over 2,000 references to pumpkin. However, most are of limited or no relevance to the HKI-SPRING objectives.

Thirty-nine journal papers were reviewed and have been broadly categorised into the following categories:

There are many cultivars of pumpkins, squashes and gourds; all were brought into cultivation in the Americas at least 8,700 years ago (Ranere et al 2009). They fall into four main species groups, but unfortunately "common" and scientific names do not always correspond consistently, for example—

The wild parents of these species are not always known and it is hypothesized that some of the wild progenitors lost their ability to disperse with the Holocene mega-fauna extinction event (Kistler et al 2015). I presume that the common pumpkins found in Sierra Leone are cultivars of Cucurbita moschata. It is possible that Agusi, which is grown for its seeds, may be something else.

Pumpkin has been grown for thousands of years under the "three sisters" system, an intimate intercropping of maize, beans and pumpkin. Studies such as Postma & Lynch (2012) and Zhang et al. (2014) help demonstrate why the three sisters system works; Qureshi et al (2015) provides additional support for intercropping pumpkin with a legume (to reduce pests, not to improve soil). Pumpkin needs a relatively fertile soil, but the relationship between root growth, phosphorous fertiliser, and arbuscular mycorrhizas is complicated by density affects (Schroeder & Janos 2005).

Storing and Processing the Fruit

Jaswir et al. (2014) studied chemical changes in the fruit over time and concluded that "long-term storage of pumpkins resulted in the accumulation of lutein and β-carotene with a slight decrease in zeaxanthin." These chemicals vary between different cultivars and seasons: β-carotene from 175mg to 693mg/100g; lutein 20mg to 59mg/100g; and zeaxanthin not detected to 3mg/100g. Zhang et al. (2014) suggest that accumulation may be due to "the increase likely resulted from a continuous biosynthesis with a possibly reduced turnover and/or enhanced sequestration, suggesting a complex regulation of carotenoid accumulation during fruit storage."

Drying of pumpkin has been studied by Seremet Ceclu et al. (2016) and the drying process modelled by Tunde-Akintunde & Ogunlakin (2013). Workneh et al. (2014) recommend dipping pumpkin in a 10 percent salt solution before drying and developping appropriate solar driers to replace drying in open air.

Pumpkin is believed to increases iron bioavailability and antioxidant capacity (Dias et al. 2015). Gibson & Hotz (2001) suggest that a sauce made from pumpkin leaves would increase bioavailability of zinc and iron over a sauce produced from sweet potato. However, work by van der Hoeven et al. (2016) showed no significant improvement from increasing consumption of leafy vegetables, including pumpkin leaf, when the deficiencies are relatively low.

Durante et al. (2016) produced freeze-dried pumpkin but found that in powdered form "storage at 25°C of free oleoresins determined a rapid decrease in carotenoids." Note this is the opposite effect to storing the whole unprocessed fruit.

El-Adawy and Taha (2001) produced flours from pumpkin seeds and five additional seeds and suggested that it could potentially be "added to food systems such as bakery products and ground meat formulations not only as a nutrient supplement but also as a functional agent in these formulations." A result confirmed for pumpkin flour by Kundu et al. (2014) indicated that pumpkin flour can be utilized with guar gum for value addition (making a wheat flour dough more workable). Noor Aziah and Komathi (2009) suggest pumpkin flour as an emulsifier because it has more affinity for oil than has wheat flour.

Pumpkin is second only to apple as the first fruit introduced into children's diets in Australia (Koh et al 2014).

Most papers on the medicinal properties of pumpkin are based on the use of the oil extracted from the seeds.

Aghaie et al. (2015) looked at mitigating the reproductive toxicity of cyclophosphamide used to treat cancer. Sharma et al. (2015) suggested a preventative effect of cucurbita on bowel cancer, but Tarrazo-Antelo et al. (2014) "observed a reduced risk for broccoli and pumpkin intake. Although fruit consumption does not seem to be associated with a lower lung cancer risk, only the frequent consumption of specific green leafy vegetables and other vegetables might be associated with a reduced risk of lung cancer."

Beneficial action of Cucurbita ficifolia and probiotic yogurt, a traditional treatment in Iran, is described by Bayat et al. (2016). Boaduo et al (2014) looked at the use of Cucurbita pepo (summer squash), a traditional treatment in South Africa, and an unspecified cucurbita on rats with diabetes in a study by Makni et al. (2011). Teugwa et al (2013) concluded that "these findings showed that the selected Cucurbitaceae seeds Cucurbita moschata contained globulins with significant anti-hyperglycaemic activity. It is therefore highly encouraged to pursue investigations towards development of peptide-drugs and/or phytomedicines from these bioactive proteins which could be used as affordable alternative therapy against DM."

There are a number of papers on allergies with pumpkins, but these primarily concern chemicals in the skin of the fruit rather than consumption of the flesh. Arochena et al. (2012) wrote about supermarket workers affected by handling the fruit; La Shell et al. (2010) wrote about adolescents, and Potter & Hashimoto (1994) wrote about dermatitis on adults.

To view the appendices, please download the PDF above.