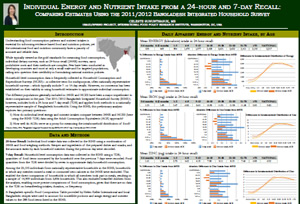 Introduction: Understanding food consumption patterns and nutrient intakes is essential for informing evidence-based food and nutrition policies, yet the international food and nutrition community faces a paucity of accurate and reliable data. While typically viewed as the gold standards for measuring food consumption, individual dietary surveys, such as 24‐hour recall (24HR) surveys, carry prohibitive costs and their methods are complex. Few have been conducted in developing countries and most at only a small scale and for targeted populations, calling into question their credibility in formulating national nutrition policies. Household-level consumption data is frequently collected in Household Consumption and Expenditure Surveys (HCES)—a collective term for multipurpose, often nationally representative household surveys—which typically include 7- or 14-day recalls. However, no consensus has been established on their validity in using household estimates to approximate individual consumption. The different populations generally included in 24HR and HCES have been a major impediment to direct comparisons in the past. The 2011/2012 Bangladesh Integrated Household Survey (BIHS)1, however, includes both a 24-hour and 7-day recall (7DR) and applies both methods to a nationally representative sample of Bangladeshi households. Using the BIHS, this preliminary analysis explores two primary questions:

Data and Methods: 24-hour Recall: Individual food intake data was collected in the BIHS using a combination of 24HR and food weighing methods. Recipes and ingredients of the prepared dishes and snacks, and the amounts eaten by each household member during the previous day were recorded.

7-day Recall: Household-level consumption data was collected in the BIHS using a 7DR; quantities of food items consumed by the household over the previous 7 days were recorded. Food quantities from the 7DR were divided by seven to approximate daily household consumption.

Among the 23,135 individuals from nationally representative households in the BIHS, households in which any member missed a meal or consumed zero calories in the 24HR were excluded. This enabled the direct comparison of households in which all members took part in meals, resulting in a sample of 14,909 individuals from 3,806 households. This also excluded breastfed children from the analysis, enabling more precise comparisons of food consumption, given that there are no data in the 7DR on breastfeeding intakes, duration, or frequency.

A Bangladesh-specific Food Composition Table provided by Helen Keller International and local Bangladeshi recipes were used to account for nonedible portions and assign energy and nutrient values to the 288 food items listed in the BIHS.

Adult Consumption Equivalents: ACEs are calculated to provide a standardized measure of food and nutrient intake that takes into account differences in the size and composition of households. ACEs are calculated as the ratio of the energy requirement of the household member, based on their sex and age, to the energy requirement of an adult male, 18-30 years of age, with moderate physical activity. In using ACEs to distribute household food to members, a household’s total ACEs are summed and then allocated to each individual as the share of the individual’s ACE to total available ACEs of the household. The ACE concept was applied to the 7DR to estimate the intrahousehold distribution of food and to the 24HR—after summing individual food intakes—to assess how well ACEs serve as a proxy for measuring intrahousehold food distribution.

Intake in Children, 0-36 Months of Age: The most marked differences in apparent energy and nutrient intake between the 24HR and ACE-based estimates are among non-breastfed children, 0-36 months of age, partly due to the intrahousehold distribution of food; ACE-based estimates assume that individuals consume portions of all available foods within the household. The diet composition of young children, particularly with respect to nutrient-rich foods, account for the large differences in nutrient intake. While energy, iron, and zinc estimates are higher, calcium intake is considerably lower—by as much as 173 mg in non-breastfed 0 -6 month olds. This can be attributed to a higher portion of milk within the household being consumed by children. Among only those children who consume milk, the contribution of milk to overall calcium intake is even higher: 81%.

Conclusions: Compared with apparent energy and nutrient intake levels provided by 24HR, ACE-based 7DR estimates are higher among all individuals for energy (11%), iron (18%) and zinc (13%), and across all age groups—particularly non-breastfed infants and young children. Daily intake estimates of Vitamin A are the most notably different, on average 33% higher, and by as much as 108 μg among 14-18 year olds.

The higher intake estimates provided by the 7DR can be attributed, in part, to higher consumption reported at the household level; the 7DR reports total quantities (in grams) of all foods consumed that are on average 19% higher. Why might this be so? Is more wastage—food leftover that is thrown away—likely over a 7DR than 24HR? Are interviewees recalling food purchases in addition to consumption during the 7DR? Is memory loss over an additional 6 days of recall affecting estimates? Determining which factors account for variation between the two methods and how to improve the accuracy of estimates—including the ability to infer which households consume which foods, and which members of consuming households consume which foods—can strengthen our ability to use HCES data to make inferences about individual intake.

The accuracy of individual consumption estimates derived from HCES data partially depend on the reliability of household consumption estimates and the adequate allocation of food within the household using ACEs. This analysis finds that, after summing individual food intakes from the 24HR to the household level and applying the ACE approach, the allocation of energy and nutrients is remarkably similar to that in the 24HR among individuals three years of age or older— roughly 94% of the population in the BIHS sample. Further analysis using this unique dataset can help identify methods for adjusting the ACE approach for breastfed and non-breastfed children.