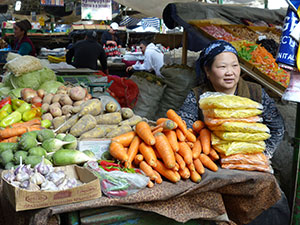 To combat undernutrition in the Kyrgyz Republic, SPRING is implementing a comprehensive, multisectoral program to influence 11 nutrition-related behaviors that are linked to stunting and anemia:

In October 2014–November 2014, SPRING carried out a baseline survey in three oblasts (regions) of the Kyrgyz Republic to gain knowledge on the current status of a range of indicators related to the above nutrition practices among women and children under two years of age. The survey was conducted by the independent research and consulting agency M-Vector in two regions where SPRING will operate (Jalalabad oblast and Jumgal district in Naryn oblast), as well as in Uzgen (Osh oblast), which was selected as a comparison region. The sample size was 900 households with at least one child under two years old—or 300 in each region selected.

The main results of the survey are reported in Table 1 (below) and expanded upon in the main body of the report. Some of the nutrition-related practices of interest were found to be already widespread in the areas surveyed, while others were underutilized; in general, improvement is possible in many areas. Among the areas most in need of improvement were hygiene, sanitation, diet diversity, and other aspects of diet and feeding. There was substantial variation in many indicators by region, with levels often substantially worse in Jumgal then in Jalalabad or Uzgen. Jumgal had lower numbers of prenatal visits, lower percentages of women consuming IFA for 90+ days, lower exclusive breastfeeding, lower diet diversity for women and children, lower prevalence of proper handwashing at critical moments, less sanitary toilet facilities, and fewer types and quantities of foods preserved.

These findings are not entirely surprising, as Jumgal is a more rural district with relatively low socioeconomic levels. It is also characterized by long winters and short growing seasons, making availability of nutrient-rich fruits and vegetables an issue, especially in winter. On the other hand, Jumgal has some advantages, such as higher ownership of livestock and greater consumption of animal-sourced foods. And while nutrition practices and conditions were better in Jalalabad than in Jumgal according to most indicators, the report nevertheless found many areas needing improvement in both regions.

SPRING has used the findings of the survey to guide planning and help focus on areas where nutrition practices are weak, to build on those that are strong, and to gather more information where findings were surprising or inconclusive. SPRING’s interventions will need to focus on all areas needing improvement and address them, bearing regional differences in mind. SPRING hopes this survey will facilitate evidence-based planning for effective project interventions, leading ultimately to improved nutrition outcomes among women and children in the Kyrgyz Republic.