A Landscape Analysis of Anemia and Anemia Programming in Uganda

Anemia, or low levels of hemoglobin, is one of the most common public health problems in the world today. It affects 25 percent of the world’s population, more than 1.6 billion people (Benoist et al. 2008). About half of all anemia is due to iron deficiency, a condition caused by inadequate intake or low absorption of iron. Iron deficiency anemia (IDA) alone contributes to more than 100,000 maternal deaths and almost 600,000 perinatal deaths each year (Stoltzfus et al. 2004). Other causes of anemia include micronutrient deficiencies, intestinal helminthes, malaria, HIV infection, and hemoglobinopathies. Iron deficiency anemia and iron deficiency increase the risk of prematurity, preterm delivery, low birthweight, and maternal and child mortality; they reduce the cognitive and physical development of children, causes fatigue, and reduce the physical stamina and productivity of people of all ages. The prevalence and burden of anemia disproportionately affect young children and women of childbearing age (particularly pregnant women) in Africa and South Asia (Stevens et al. 2013).

In Uganda, anemia has been a major public health problem for many years. The earliest nationally representative anemia data are from the 2001 Uganda Demographic and Health Survey (UDHS). They indicated that 71 percent of children under five and 37 percent of women of reproductive age (WRA) were anemic. Five years later, these rates increased to 73 percent and 42 percent, respectively (Uganda Bureau of Statistics and ICF International, Inc. 2007). According to the World Health Organization (WHO), countries in which the national anemia prevalence rate is 40 percent or more have a “severe” public health problem. Since 2006, however, Uganda has made considerable progress in this area. The 2011 UDHS reported prevalence rates of 49 percent and 23 percent among children and WRA, respectively. This reflected reductions of 32 percent and 45 percent, respectively, and surpassed the Government of Uganda’s (GoU) targets for 2016 (GoU 2011).

Rationale for the Study and Study Objectives

The purpose of this study was to better understand the factors contributing to the reduction in anemia prevalence and to inform anemia, nutrition, and health policies going forward. This included assessing the changes in the nature, coverage, and utilization of programs, as well as assessing changes in personal practices and behavioral patterns of Ugandan children (6–59 months old) and WRA (15-49 years old) over the past decade. Another objective of the study was to deliberate and develop consensus among stakeholders about which programs most likely contributed to reducing anemia. It was also hoped that this analysis would promote the development of a long-term participatory process of cross-program and multisectoral coordination that would encourage more integrated policy and program approaches that will improve the coverage, effectiveness, and efficiency of anemia-reductions efforts.

The specific objectives of the study were to—

This study analyzed data from three UDHS surveys conducted in 2000-01, 2006, and 2011. In each survey, hemoglobin was collected and anemia prevalence was established. Hemoglobin levels were adjusted for altitude and were calculated separately for children 6–59 months and of women 15-49 years of age.

Figure 1. Among Women with a Birth in the Past Five Years, Percentage Reporting Receiving Various Anemia-Related Interventions during Pregnancy, 2001–2011 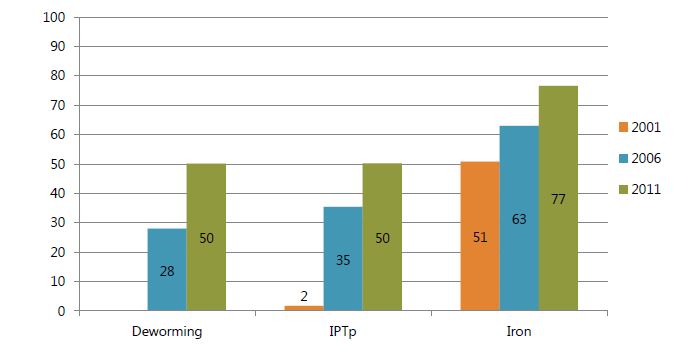 Table 1. Proportion of Non-Pregnant Women Owning a Bed Net, and among Those Who Own, the Percentage Who Slept Under One the Previous Night, by Region, 2001–2011 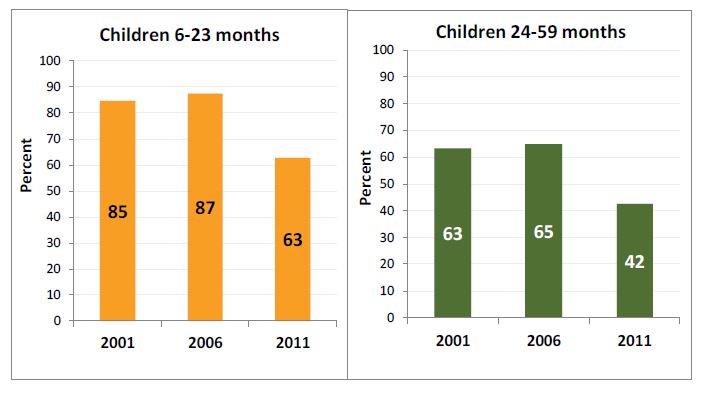 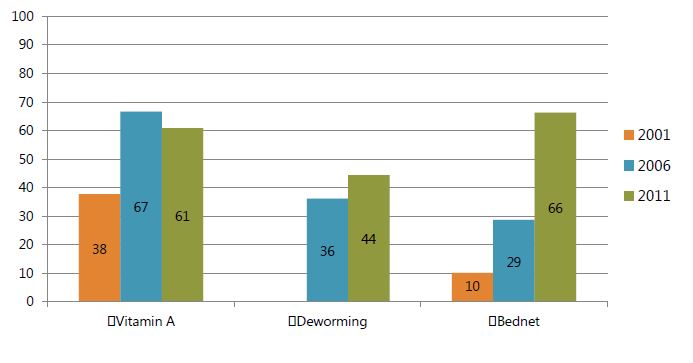 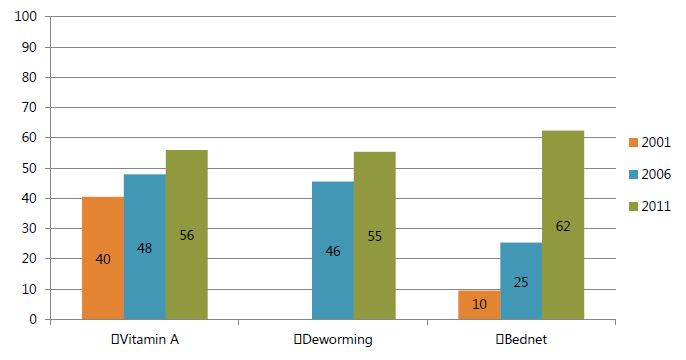 Uganda has shown a remarkable reduction in anemia prevalence over the last five years. The reductions in anemia among children 6–59 months and among WRA reflect broad-based gains by all strata of the population since 2006 that more than offset the 2001-2006 increases in prevalence rates.

The findings from this study show that while the gains since 2006 have been enjoyed widely, the rates of decline in anemia prevalence have varied, with some groups and strata experiencing relatively greater gains. Most of women’s gains have been in mild anemia, whereas among children—especially among the youngest children, 6–23m—there have been larger percentage point reductions and larger percentage declines in moderate and severe anemia. Based on the findings, several behaviors and programs may have contributed to reduction in prevalence of anemia among women and children over the last 10 years.

Study results indicate that several strategies for anemia prevention and control are in place in Uganda. These include supplementation of women and children with iron and vitamin A, deworming, food fortification (particularly vitamin A-fortified oil), and strong malaria prevention and control programs. The proportion of women and children participating in anemia-related interventions has also increased in the last decade. However, a number of challenges to sustaining and improving these programs remain. The low coverage and participation of women and children in integrated maternal and child health programs may indicate a number of challenges with such programs, including issues related to quality of services, human and financial resources, provider capacity, awareness of anemia and related services, and other factors that may hamper the effective delivery of these services.

Despite having the focused ANC package and Child Days Plus (CDP) programs in place, the Ugandan health care system has not been able to fully commit to ensuring that all components of the package are implemented for a majority of the target populations. Poor financial resource allocation, inadequate human resources, poor management and quality of care are possible factors that confound the implementation of various integrated package components (Health Sector Strategic Plan II).

Download the PDF above to read the full report.

1 Use of insecticide-treated nets (ITNs) is also recommended and the National Malaria Control Program’s Strategic Plan calls for ITNs to be distributed during antenatal care clinic visits, but the DHS only asks about bed net use during the night prior to the survey, not during pregnancy.

2 Three IYCF practices (per breastfeeding) status refers to infant and young child feeding practices among children 6–23 months old living with their mothers, as established by WHO. The binary indicator takes into account food diversity (number of food groups), frequency of feeding; and consumption of breast milk or other milks and milk products and is restricted to the last-born child.