A Landscape Analysis of Anemia and Anemia Programming in Sierra Leone 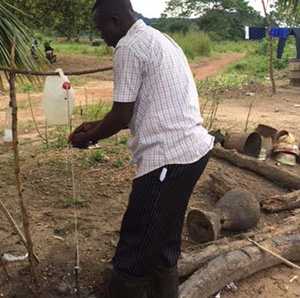 The Sierra Leone Ministry of Health and Sanitation (MOHS) and Scaling Up Nutrition (SUN) Secretariat requested that the SPRING project provide technical support in conducting a landscape analysis to describe the anemia situation in Sierra Leone. The objectives of the analysis were to better understand the factors that contribute to anemia, to track the progress of anemia and anemia-related programs, and to identify anemia-related policies. The analysis provides information on the anemia situation in Sierra Leone to guide multi-sectoral and multi-stakeholder anemia prevention and control efforts.

This landscape analysis used multiple strategies to capture the current situation in Sierra Leone with respect to anemia and anemia-related programming. The analysis compiled data from the most recent national surveys on anemia prevalence and related behaviors: the 2008 and 2013 Sierra Leone Demographic and Health Survey (SLDHS), the 2013 Malaria Indicators Survey (MIS), and the 2013 Sierra Leone Micronutrient Survey (SLMN). In addition, a literature review of published and grey literature was conducted to find relevant surveys or studies that reported additional, but not necessarily nationally representative, indicators. To assess policies and programs currently in place, the relevant databases and websites were searched for documents, reports, and policies. Finally, to gain further understanding of the association between anemia-related factors and anemia outcomes, logistic regressions were run using 2013 SLDHS data to calculate odds ratios for both children under five years and women of reproductive age (WRA). It is important to note that these data were collected prior to the Ebola outbreak; as a result, this landscape analysis does not account for the widespread effects of the outbreak and may not fully capture Sierra Leone’s current situation.

In Sierra Leone, there was little to no improvement in anemia in children aged 6–59 months and women of reproductive age (WRA) between 2008 and 2013, while some improvements have been seen among pregnant women (62 to 54 percent) during the same time period (SLDHS 2008, 2013). Based on 2013 SLDHS data, anemia is highest among younger children (6-24 months) and adolescent girls (15-20 years). Looking at regional variations, anemia is lowest in the WRA living in the western region (31 percent) compared to the eastern, northern, and southern regions. In children, the prevalence of anemia is highest in the northern region (83 percent) and lowest in the western region (71 percent). SLDHS data show that between 2008 and 2013, the prevalence of anemia among women decreased in the western region, urban areas, the richest segments of the population, and among households with higher maternal education, and conversely increased in all other regions, rural areas, and among households that were poorer and had lower maternal education. Similar patterns were not seen for children, with anemia remaining high across sociodemographic factors between SLDHS 2008 and 2013 data. Results from the logistic regressions (summarized in Appendix V) using SLDHS 2013 data are consistent with existing knowledge about anemia causes and vulnerability: among children, some of the most robust predictors of anemia status appear to be age (with older children being less vulnerable than infants) and stunting. Similar to anemia prevalence rates, a relationship between subregion and anemia is apparent for women of reproductive age, with those living in the western region having the lowest odds of being anemic. Women in younger age groups are more vulnerable to anemia, with adolescent girls faring the worst.

The findings of the landscape analysis indicate that a larger portion of anemia is likely the result of malaria, other infections, and general inflammation rather than nutritional deficiencies; but infections alone are unlikely to be the only cause of anemia. Malaria is endemic in Sierra Leone and is likely a large contributor to anemia; the regions with the highest prevalence of malaria also tend to have the highest prevalence of anemia (MIS 2013).

Another factor for high anemia burden may be prevalence and intensity of soil-transmitted helminths (STH) and schistosomiasis. In Sierra Leone, cross-sectional surveys of preschool children in 2010 found STH infections to be low according to WHO’s classification, with the exception of hard-to-reach villages where prevalence of hookworm was classified as moderate; prevalence of schistosomiasis ranged from 11.2 percent to 33.5 percent, also categorized as moderate (Hodges 2012). Sentinel surveillance studies comparing 2013 schistosomiasis prevalence to baseline levels in 2010 found a 67.2 percent reduction in infection, from 49.7 percent to 16.3 percent. Similarly, the percentage of children with moderate and heavy infections had declined to 3.3 percent and 1.2 percent, respectively. Considerable improvements on STH/SCH have occurred in the last decade, but anemia remains high and as the country nears low prevalence and light intensity, the impact of STH/SCH control on anemia diminishes.

The high prevalence of anemia is associated with the high prevalence of general inflammation found in these populations (SLMNS 2013), which may be caused by diarrheal disease and lower respiratory infections, in addition to malaria and helminthic infections. Increases in open defecation may have facilitated the increase in the incidence of infection and inflammation, leading to a further exacerbation of anemia (WHO/UNICEF 1990 and 2010).

While iron deficiency is considered to be a major contributor to anemia worldwide, it is not a likely driver of anemia in Sierra Leone due to the low levels of iron deficiency found in this population (SLMNS 2013). Further studies should be carried out to confirm this finding, such as testing the bioavailable content of iron in drinking water.

In addition to other immediate, underlying, and basic causes of anemia, hemoglobinopathies (genetic blood disorders), such as sickle cell disease, may play a contributing role to the high prevalence of anemia. Further exploration of this connection in Sierra Leone would be advantageous (Piel 2013).

Infection control programs can contribute to the reduction of anemia in Sierra Leone. While coverage of malaria prevention strategies has increased, there is a need to continue to strengthen these efforts. Focusing on improvements in malaria diagnosis and treatment will also likely result in greater reductions in anemia prevalence (SLDHS 2008, 2013). Deworming program coverage in preschool children, school-age children, and adults have reached high coverage levels since 2009 and should continue to be implemented and strengthened to even higher levels. STH and schistosomiasis prevalence and intensities have fallen from high/moderate and heavy to moderate/low and light, respectively (Sesay et al. 2014; Hodges et al. 2012). Increased incidence of general inflammation and infections can be addressed with water supply, sanitation, and hygiene (WASH) programs. The WASH sector must deal with issues of availability, access, and utilization of safe water, as well as sanitation and hygiene practices. In particular, there is a need to address gaps in coverage of safe water and sanitation facilities in rural areas.

Food and nutrition interventions still remain an important factor in reducing anemia in the short and long term. Iron-folic acid (IFA) during pregnancy remains an important intervention despite the apparently low levels of iron deficiency in WRA and children under five. Iron requirements increase dramatically during pregnancy and the provision of daily IFA reduces anemia and improves birth outcomes. The percentage of women reporting taking IFA during their last pregnancy has increased, but further improvements are needed.

Despite high coverage of biannual vitamin A supplementation among children, vitamin A deficiency remains a moderate public health problem as defined by the World Health Organization, and additional strategies should be considered. Other food and nutrition strategies, such as increased intake of fortified food products, like wheat flour (with iron), and vegetable oil (with vitamin A), continue to remain important for prevention of anemia and improving overall wellbeing. However, consumption of fortified flour and vegetable oil was found to be low in poor and rural households in Sierra Leone. Aside from issues related to cost, availability and accessibility of these products, few individuals were aware of the benefits associated with consuming these fortified foods (SLMN 2013).The promotion of nutrition-sensitive agricultural interventions at both household and commercial levels may thus contribute to progress in the reduction of micronutrient deficiencies.

Lastly, promoting women’s empowerment efforts, including increased education and literacy, delayed age of first childbirth with family planning programs, and adequate spacing between births for WRA, will ultimately reduce anemia over the long-term. Given that iron deficiency may not be the main driver of anemia in Sierra Leone, an integrated approach appears to be even more important.

In Sierra Leone, anemia is considered a severe public health problem as defined by the World Health Organization. Population-based national survey data indicate iron deficiency does not appear to be a major driver of anemia in Sierra Leone. Two key causes of anemia identified were malaria and general inflammation. Other direct (e.g. genetic variations, other infections) and indirect (e.g. inadequate birth spacing, education) factors likely also contribute to anemia but have either not been measured or are difficult to quantify. Programs to prevent and control anemia have improved between 2008 and 2013, but significant efforts are needed to meet the anemia reduction targets set forth in Sierra Leone’s National food and Nutrition Implementation Plan (NFNIP). Recognizing the interplay between nutrition, infection and hygiene, integrated and complementary interventions will be needed to meet global and country-specific anemia reduction targets. Building on Sierra Leone’s commitment as a SUN country, coordinating anemia efforts across government sectors, with multiple stakeholders and at multiple levels, can contribute to anemia prevention and control efforts in Sierra Leone.

Please use the download link above to view the full report.