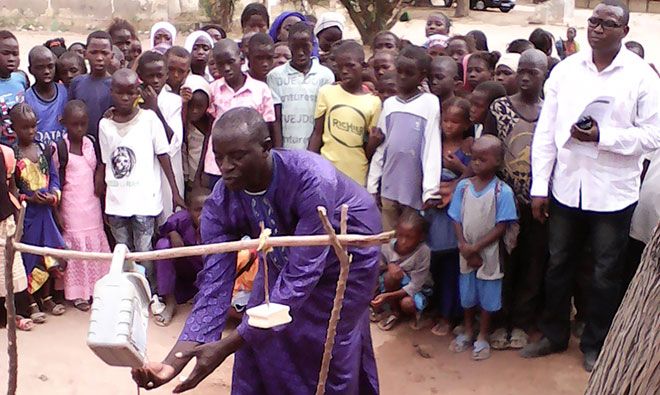 Community radio programming using SPRING’s multi-channel approach was at the center of a recent community day in Thiarre Commune in the village of Thiokomaty, Senegal. In the morning, the SPRING/Senegal team and staff from local partner organization UPCL taught hygiene and handwashing at the local primary school. Children produced a skit and recited, in French, the list of critical times to wash your hands, as part of their French lesson.

In the afternoon, the entire village was invited to the village gathering place with all of the local leaders (religious, traditional, civil society, and from the mayor’s office). Nearly the entire population attended, having been attracted by music and verbal invitations projected over the public announcement (PA) system.

During this gathering, the children performed the skit they had created for the community and read aloud their list of critical moments for handwashing. After the performance, SPRING and partner staff demonstrated how to build a tippy-tap. The crowd, including adults and children, participated in a quiz game based on the performances and demonstrations. Guests who answered correctly received a prize of a bar of soap and sachet of water.

The local community radio station recorded the entire event and used the recording to produce a 10-20 minute program and three short news items that repeated the key handwashing behavior messages from the event to reach a wider audience.