Bringing National Attention to Anemia Prevention and Control in Uganda 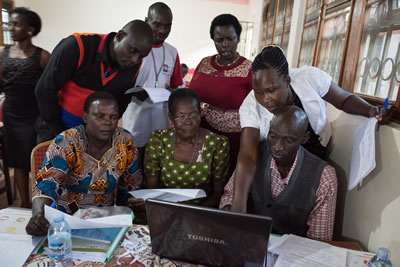 Anemia is a major public health challenge in Uganda. According to the most recent Uganda Demographic and Health Survey of 2011, 49 percent of children under five years and 23 percent of women of reproductive age (15-49 years) are anemic. These prevalence rates are considered to be of severe and mild public health significance respectively, according to the World Health Organization (WHO). There are multiple causes contributing to the high prevalence of anemia in Uganda, which requires a multi-sectoral and context-specific approach to its prevention and control.

The Ministry of Health (MoH), with support from SPRING/Uganda, coordinates a multi-sectoral National Anemia Working Group (NAWG) which is intended to strengthen the policy environment, planning, implementation, coordination, and monitoring of anemia prevention and control initiatives in the country.

A key output of the NAWG is the Uganda Anemia Prevention and Control Strategy 2017/18-2021/22, which aims to reduce anemia and its consequences among women, children, and vulnerable groups in Uganda. The strategy adopts an inclusive, multi-sectoral approach by bringing together key stakeholders (health, agriculture, gender, education, local government, finance and planning, water and environment, trade and cooperatives, academia and research institutions, the private sector, civil society organizations, and development partners) that have a role to play in addressing anemia. The anemia strategy will be finalized and launched at the upcoming national anemia stakeholders meeting in April 2017, in addition to sharing progress on anemia reduction efforts through other outlets.

SPRING/Uganda partnered with Uganda’s Ministry of Education and Sports to integrate anemia prevention and control into the Health Tutor College of Mulago's curriculum. A draft module, learning guide and trainer manual has been developed and will be included in the Bachelor of Medical Education curriculum to increase pre-service and in-service health workers’ capacity to address anemia.

In coordinating anemia reduction efforts at the national level, the NAWG found that district involvement was critical to move the anemia agenda forward. Over the past year, SPRING and the NAWG piloted the District Assessment Tool for Anemia (DATA) in three districts, which brought together district officials from multiple sectors to determine the main risk factors for anemia and to assess anemia-related programs in order to prioritize actions for anemia reduction in their context. We are disseminating the DATA findings and supporting partners in the rollout and adoption of DATA in other districts.

At the request of the NAWG, SPRING also conducted a randomized trial study at Mulago Hospital to investigate the effect of iron and folate (IFA) packaging on adherence by pregnant women. The study explored whether packaging of IFA supplements into a 30-tablet blister packs rather than in traditional packaging (loose paper bags) could increase compliance with IFA recommendations.  Results of this study will inform a change in policy around packaging of IFA scale, if blister packaging is proven effective.

Finally, SPRING is conducting a situational analysis on adolescent anemia and nutrition to inform advocacy, policy and programming for adolescents. We are producing a short video to prompt school administrators and policy makers to take action in the prevention of adolescent anemia. The video will highlight the available interventions in the control and prevention of anemia such as promotion of hygiene and sanitation, iron and folic acid supplements, deworming pills, malaria control, and consumption of fortified foods.