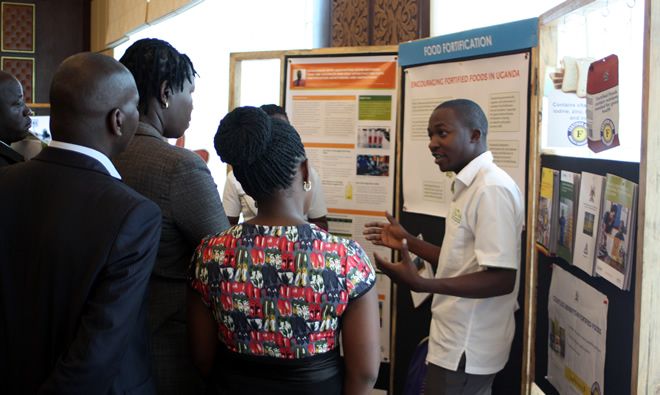 Nearly 100 people attended SPRING/Uganda’s close out and legacy event to celebrate the project’s five-year journey to achieve results in nutrition. Participants included representatives from the USAID/Uganda Mission, officials from different ministries of the government of Uganda, development partners, and stakeholders from both the public and private sectors.

SPRING/Uganda staff presented a timeline of the key activities and achievements from community engagement efforts in 2012 to strengthening policies and developing national strategies for anemia and food fortification in 2017. Staff also presented work in micronutrient powders (called vitamin and mineral powders locally), food fortification, anemia, and district- and community-level engagement at exhibition booths.

All speakers at the event appreciated SPRING/Uganda’s efforts in nutrition, particularly in the areas of reducing stunting, anemia, and in advocating for improved quality of food consumed by students. Robinson Nsumba Lyazi, the director of education standards at Ministry of Education and Sports said, "SPRING took interest in school feeding, a matter that is critical to the Ministry of Education and Sports. This is through producing an advocacy documentary for enhancing the crusade in the fight against micro-deficiencies especially among school children through improving demand and consumption of fortified foods."

He asked fellow event participants to share the video and for their support in getting schools to purchase fortified maize flour.

Dr. Frank Kaharuza of USAID said the project’s partnership with the government bodies has been fruitful. He praised SPRING/Uganda for using a multi-sectoral approach to achieve common nutrition goals.

The guest of honor, Minister of Health Dr. Jane Ruth Acheng, highlighted the work SPRING/Uganda has done in her speech. She said, "I speak with confidence that SPRING/Uganda has made a mark in bridging various gaps in coordination and implementation of efforts to prevent and reduce malnutrition and anemia in Uganda. Your work has paid off."

"I thank the USAID funding agency for the continued support to government of Uganda through projects like SPRING/Uganda," she concluded.

Established in April 2012, SPRING/Uganda aimed to contribute to the reduction of stunting and maternal and child anemia through technical assistance and leadership at the national- and district-levels. SPRING/Uganda worked with multi-sectoral partners to roll out the Uganda Nutrition Action Plan, engage technical working groups in anemia and food fortification, and promote research and food fortification efforts. We organized behavior change communication campaigns to accompany our activities, reaching the public through radio, print, community video, social media, and point-of-purchase materials.

In addition to assisting national-level activities, SPRING/Uganda delivered services to improve the nutritional status of mothers and children in the Southwest (SW) and East Central regions of Uganda. SPRING piloted point-of-use micronutrient powders (MNP) to fortify complementary foods for infants 6–23 months old in Namutumba District and explored how MNP distribution can be integrated into infant and young child feeding practices nationally. SPRING/Uganda also supported the reestablishment of the nutrition assessment, counseling, and support (NACS) continuum of care in nine former NuLife-supported hospitals and the expansion of NACS services to 35 health centers in the districts of Kisoro and Ntungamo in the SW region.

Photo (top): Mike Mazinga, a member of SPRING/Uganda staff, explains how SPRING played a role in encouraging production and consumption of fortified foods in Uganda.